A former child star torments her paraplegic sister in their decaying Hollywood mansion.


Roger Ebert: The story involves sisters who were once movie stars, played by Bette Davis and Joan Crawford. The casting is one of the crucial successes of the film, although it is hard to imagine how Aldrich convinced the two divas to appear together. Rivals since the 1930s, competitive, vain and touchy, they by all accounts hated each other in real life. Indeed, a book was written about their mutual disdain, Bette and Joan: The Divine Feud (1989). It is claimed on IMDb.com that in the scene where Jane kicks the helpless Blanche, Davis kicked Crawford so hard a cut required stitches. This is surely an urban legend, since the actual contact takes place below frame and Crawford would not have been present for the shot.

What wasn't an urban legend was that the two were fiercely competitive; it's possible that each agreed to do the picture only because she was jealous of the other's starring role. In the event, it was Davis who emerged on top, winning an Oscar nomination as the former child star who was now a shrill gargoyle with makeup pancaked all over her face. Davis was nothing if not courageous, as she abandoned all shreds of vanity and overacted her heart out. Crawford plays the quieter, kinder, more reasonable sister -- and, it must be said, the less interesting.

Slant: It’s no secret that Crawford and Davis envied and openly despised one another; anecdotal lore testifying to the myriad ways these divas one-upped and punked each other during production abounds. That undeniable off-screen friction only helps grease the wheels of the film’s compulsive forward momentum, supplying a crackling energy to scenes wherein, among other gothic horrors, pet birds are served up for supper with relish. But the torment on display isn’t exactly a one-way street: As relentlessly as the film at first positions Baby Jane as the sadistic malefactor, later scenes sow seeds of pathos and even pity that will blossom just in time for the bitterly ironic finale. There’s an end in sight for Blanche’s longsuffering predicament, just as Jane finally finds her place in the sun.

Senses of Cinema: Whatever Happened to Baby Jane?

AV Club: What Ever Happened To Baby Jane?
posted by MoonOrb (6 comments total) 2 users marked this as a favorite
This movie is like Rocky Horror for a certain generation of gay men. It’s been a while, but I still remember seeing it at the Castro theater where the whole audience knew the lines and would riff on them.
posted by expialidocious at 6:52 PM on June 7, 2018

Great movie. Obviously the acting is fantastic, but another thing I love about it is that, unlike so many thrillers, nobody really holds the idiot ball at any point. The supporting characters are rightfully suspicious, they investigate things promptly, they attempt to call the police, etc. Despite all the scenery-chewing, the whole movie still feels somewhat realistic because the plot is relatively plausible and un-contrived.

And what an amazing ending.

The "Feud" TV series last year, with Jessica Lange and Susan Sarandon as Joan and Bette, was a fantastic look at the making of this movie. It has some bitchy fun with the antagonism of the two stars, but places it firmly in the context of Hollywood's treatment of women in the period.
posted by dnash at 5:29 AM on June 8, 2018 [2 favorites]

One of my daughter's many, many nicknames is "Blanche" precisely because of this line. It's the one we use when it's time to put her in her high chair for dinner. I'm like "Come here, Blanche!" And then when she's all belted in, then she gets the "But you are, Blanche! You are in the chair!" And then she gets her dinner.

Which is not her pet bird...

An absolute classic. The TV remake with the Redgrave sisters is worth seeking out as a camp curio, although (acting aside) it's really not very good.
posted by Ursula Hitler at 4:50 PM on June 8, 2018

I watched this last year in order to prep myself for watching Feud, as I had never seen it before and figured I would need to see the movie in order to understand the references in Feud. I was right about that, but I did not enjoy Baby Jane. I was looking at the tracker the entire time to see how much more of it had to endure. It's just a B horror movie, and so cheesy. Davis and Crawford turned in excellent performances, but I wish they'd had better material to work with.
posted by orange swan at 10:50 PM on June 8, 2018 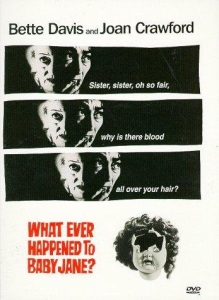