Romantic comedy about a woman who must steal a statue from a Paris museum to help conceal her father's art forgeries, and the man who helps her.


Variety: [T]he script twirls around Audrey Hepburn, daughter of a distinguished French family whose father, Hugh Griffith, is a faker of genius. She has given up trying to reform him, continuing only to hope he won’t get into too much trouble. Peter O’Toole is a private detective who specializes in solving crimes in the world of art, but whom femme thinks is a burglar after she discovers him in the family home in the middle of the night apparently trying to make off with a canvas.

PopMatters: But the plot is hardly the point here. One of William Wyler's last films, and his second with Hepburn (the first was Roman Holiday), How to Steal a Million finds the director displaying his knack for sophisticated comedy. This task is made slightly easier with tremendously gifted cast he assembled. Though the script, by Harry Kurnitz, takes too many digressions (the unfunny subplot involving Eli Wallach as Nicole's potential suitor is unnecessary), it is a credit to the actors that the film remains engaging. O'Toole is thoroughly delightful, debonair and dashing while showing a fantastic gift for comedy. And Hepburn, well, she's Hepburn.

How to Steal a Million is the first ever released in Panavision. The director and his cinematographer, Charles Lang, make the most of the new technology. While most of the settings here are interiors, the shots never feel confined. Spacious compositions, particularly in the Bonnet home and in the museum, seem almost to expand the opulence of Paris, or at least to punctuate it. Each scene thus emphasizes the grandeur of being fashionable and wealthy in one of the world's most beautiful cities, not to mention shooting on location.

Filming Locations
posted by MoonOrb (7 comments total) 3 users marked this as a favorite
This is such a great movie. By the time I was growing up, Audrey Hepburn's image had already calcified into "style icon." It's not a bad thing to be known for, but it's a flattening thing. I remember being surprised when I started watching her films and realized she was really funny in them.

And maybe it was a Hays code thing ("he's not really a thief....he's a private investigator!" or "he's not really a spy....he's a government spook!" in Charade), but romcom misunderstandings used to be so much more fun. The forced whimsy of romcoms from the aughts really suffer in comparison.
posted by grandiloquiet at 7:34 PM on June 23, 2018 [2 favorites]

AHHHHH I love this movie so much. Stray thoughts:

I've always been struck by how similar the "lol, you thought I was a charming thief but I'm actually a lawman!" twist is to Cary Grant's character in Charade. Is this a lingering Hays Code criminals not being allowed to profit thing? Or was it just considered too against Hepburn's image to have her pair off with an actual rascal?

I've had a great fondness for this movie since I first saw it on TV when I was a kid. Given the more usual pairings Hepburn faced onscreen, much older men, I have to give Wyler a lot of credit for providing her with two great romantic pairings, both actually younger than Audrey; O'Toole here and, of course, Shirley MacLaine in The Children's Hour. (How to Steal a Million actually marking the third time Wyler worked with Hepburn, contrary to what PopMatters says.)
posted by gusottertrout at 8:31 PM on June 23, 2018 [1 favorite]

When I first watched this movie all the way through on Fox's movie channel, I already knew Audrey well from most of her movies, from Roman Holiday to Robin and Marian with Sean Connery. How to Steal a Million is very well done. It's entertainment that is so rare today.

As for the bad guys turning out to be good guys angle, I don't think that's a Code thing. Grace Kelly got paired with a (retired) criminal in To Catch a Thief over a decade before after all.
posted by Fukiyama at 2:06 PM on June 24, 2018

That was fun - my then tween daughter enjoyed it too. It's... stagey? I guess? I can't say I remember much about it, just light and fun and I enjoyed how unconcerned everyone was with badness.
posted by latkes at 9:47 PM on June 27, 2018

This seemed like it would be up my alley so I watched it a few days ago with too-high expectations and was kind of underwhelmed.

My main problem is it wasn't much of a heist movie; the caper was basically "hope the guards react poorly and then walk out with the statue." They tried to obscure the simplicity with a gratuitous boomerang and hilariously long and byzantine scheme to open a single ordinary lock on an interior closet door. Relying on incompetence is more plausible than most plots but we didn't get any of the competence porn I want out of a movie like this. O'Toole supposedly had multiple degrees in all sorts of relevant stuff but that was a very much tell-not-show bit of characterization.

Beyond the heist, well, Hepburn is always wonderful and O'Toole has to be the greatest and most enjoyable ham in cinema but the banter was only occasionally solid and some of it aged poorly (e.g., the forced kiss followed by the molestation line.)

In the "pointless re-write in my head" category, I think it might work better if the quirky multi-generational family of art forgers is more prominent and the robbery is the price of entry for O'Toole.

Is this a lingering Hays Code criminals not being allowed to profit thing? Or was it just considered too against Hepburn's image to have her pair off with an actual rascal?

Now that you mention it I think probably. The code officially went out in '68 so this would be at the tail end. It was pretty atrophied but they do make a big point not just that O'Toole isn't a real thief, but that the father didn't profit off the money either.

Almost any post-code flick I feel like the natural move is to bilk the creepy American businessman, as he totally deserved some punishment, and it'd let Hepburn and O'Toole live in style even as they got the dad to stop churning out forgeries.
posted by mark k at 8:48 PM on June 29, 2018 [2 favorites] 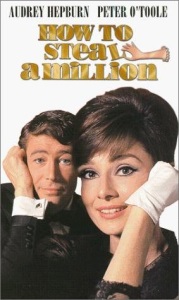