Daniel Lugo, manager of the Sun Gym in 1990s Miami, decides that there is only one way to achieve his version of the American dream: extortion. To achieve his goal, he recruits musclemen Paul and Adrian as accomplices. Their plans turn increasingly violent in their execution, and a retired private investigator gets involved.


Pain & Gain is based on a three part article series about the true-life crimes as described above that was originally published in Miami New Times by Pete Collins. (Previously on the blue with links to the MNT series; MNT update on the current (as of 2013) whereabouts of the principle people involved.) The movie took several liberties with the real-life events, including creating Paul Doyle (played by Dwayne Johnson) as a composite of several people. They also changed Marc Schiller to Victor Kershaw (Tony Shalhoub). The cast also includes Mark Wahlberg, Anthony Mackie, Ed Harris, Rob Corddry, Rebel Wilson, and Ken Jeong. It was directed by Michael Bay--considered a departure from his usual over-the-top action fare--and written by Christopher Markus and Stephen McFeely, authors of several MCU films as well as the recent adaptations of the Narnia books.

Roger Ebert (Simon Abrams): 2 1/2 stars
posted by Halloween Jack (5 comments total) 1 user marked this as a favorite
This looks like it could be a great double-feature with Spring Breakers.
posted by rhizome at 2:30 AM on September 3, 2018

It was the first Michael Bay movie that I've ever watched all of (I've seen bits of Pearl Harbor, Armageddon, and random Transformers movies), and honestly, I've had worse times. It does seem like Bay's best attempt at a Coen Bros. movie, and that in itself is kind of fascinating--what Bay gets right and wrong and seems to completely miss. Bay also seems to be going for a Miami Vice tribute/parody, and that works a bit better, if only because the MV signifiers are pretty easily accessible, and because part of the comedy comes from the relatively low stakes of their criminal activities, compared to MV's drug world. Somewhat gory, given that they're sticking to the details of some pretty gruesome crimes. Everybody does well with their part, Dwayne Johnson probably the best, especially when he gets a bit scary.
posted by Halloween Jack at 12:40 PM on September 3, 2018

I fucking love this movie. I knew nothing about it going in and was desperately trying to figure out throughout the entire film if it was really stupid or an unbelievably cutting indictment of American masculinity. Turns out it's both and what could be a better tribute to the idea of the musclebro than that?
posted by WidgetAlley at 3:49 PM on September 3, 2018 [3 favorites]

the outfits in this movie are glorious
posted by poffin boffin at 7:26 PM on September 3, 2018 [1 favorite]

This is a perfect example of guilty pleasure. I remember the post on the blue and agreeing with the distastefulness of making a "comedy" about real people/victims and skipping it. But then, as one does in hotels on business trips, I caught it on HBO and laughed my ass off.

Johnson and Wahlberg are perfect in their roles. I would watch the hell out of those two getting into trouble any day. Throw in Pitt's character from Burn After Reading and we got a Ocean's 11 type franchise.

Shalhoub sleazing it up was also fun considering his spotless Monk reputation.
posted by M Edward at 10:59 PM on September 3, 2018 [1 favorite] 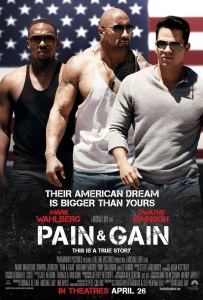