The kids in the cookie-cutter suburb of New Grenada have been forgotten. Enduring a bored existence punctuated by drugs and petty crime, the restless teens seek release as tensions rise between their tribe and the various authority figures in their lives... until tragedy strikes, and the town explodes.

Over The Edge was the only teen movie that made any sense. — Jodie Foster

Over the Edge is a funeral service held at the graveside of the suburban dream. It tells a ragged story that ends with an improbable climax, but it's acted so well and truly by its mostly teen-age cast that we somehow feel we're eavesdropping. Roger Ebert

Beyond the images of white, middle-class American tots and teenagers stoned on grass, hash or acid, talking an acquired jive-jargon to express an angst that is both sublimely ridiculous and chilling, there's a vision of America in Jonathan Kaplan's Over the Edge that is anything but ridiculous. The New York Times
posted by Ten Cold Hot Dogs (3 comments total) 3 users marked this as a favorite
The real-life events that inspired this movie occurred near where I grew up, and this kind of "hanging out at construction sites" in expanding suburbs is a significant part of my history from the 70s through the 80s and early 90s. So many different developments! Housing tracts, The Mall, the business park. Trying to figure out how to start a bulldozer. A lot of these phases replaced places where kids hung out, many times BMX areas (which of course should be protected), and they were a constant source of fun. When I started skateboarding, we got all of our wood, 2x4s and plywood, from the construction sites. Later on they were safe places to smoke pot. To me this was as real as the suburban dream ever was to me.

This kind of bored mischief is also very familiar. Not as much for me as many others, but it was always there. I knew these characters! And once a tract was completed and we started going to school with their kids, another one would go under construction and the cycle starts all over again. This other one was the time it made the news.

I didn't see this movie until the last 10 years or so, and it was kind of a "holy shit" moment. Even the school thing didn't seem out of place! There are other movies that speak closer to my later life, but this touches a younger time in an extremely obscure way (if you know it's not just an anomaly). The costumes are perfect.
posted by rhizome at 7:38 PM on October 7, 2018 [6 favorites]

parents moving backwards in time: I wish kids would stop playing video games and go outside.

parents moving backwards in time: no not like that
posted by fleacircus at 1:45 PM on October 9, 2018 [4 favorites]

This is one of my favourite movies of all time. I grew up in burgeoning Canadian suburbs in the ‘80s and ‘90s. This movie perfectly nails the ennui. Nintendo, and later, the internet, may have tempered our recklessness a little, but we still got up to plenty we shouldn’t have.

The tone! How it manages to go completely, well, over the edge into pure fantasyland while still feeling completely grounded in reality just boggles the mind. Especially given the time, this could have slipped into a pure exploitation b-movie so easily. Is it just the soundtrack? The soundtrack is all great from top to bottom. Set to the usual bow-chika library music of the time, would it all feel like a silly after school special, or a particularly bad episode of CHiPs? Who can say?

My favourite thing, though, is that the girls who get on the school PA and and are all, “Practice your pianooo,” got to improvise all that stuff and really vent about their home life. And that piano line so perfectly encapsualtes so much for me personally.

Trying to figure out how to start a bulldozer. 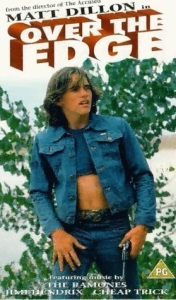