Having seen a glimpse of his father's past, Eren attempts to track down a man who might shed some light on his father's secrets.


I'm sure there are others who watch this show so I hope we can get into a regular discussion about it now that it's a weekly thing and I can follow it on Hulu.

I wanted to really make a couple of points about this one: I was surprised they haven't tried to make the Executioner From Hell weapon before, but I suppose that's what the cannons that can shoot straight down the wall are for if Titans ever get close enough and bend down.

I love that they're circling all the way back to Eren's sabotaged belt during the test. And that Commandant Keith Sadies was the one! They never did mention if there was an investigation into that and I guess now we know why.

This whole season has been full of revelations!
posted by numaner (2 comments total)
This show needs 100% more dunking on Eren for being a fucking weirdo.
posted by runcibleshaw at 7:56 PM on October 9, 2018 [1 favorite]

i mean, he's not without good reason for being so weird, given who his father was and all the crap he went through. i think the rest of them generally give him a wide berth just because they know all of his issues.
posted by numaner at 9:47 PM on October 10, 2018 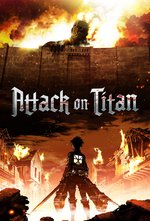