Candy taps an unlikely co-producer. Bobby is on the wrong end of a raid. Big Mike cashes in on a hit.


Temporarily flush with cash, Frankie is tapped by Candy to be a co-producer on Red Hot. Lori eyes a plum role in the film, but still feels the burden of being under C.C.'s yoke.
With Rudy's blessing, Big Mike and Black Frankie hit a gambling house in the Bronx. Bobby finds himself stigmatized at home and at the Hi-Hat after a surprise raid overseen by Alston. Paul encounters resistance to his elaborate renovation plans.
Out of rehab, Shay is convinced to move in with a nurturing Irene. As she and Abby deliver on their promise to provide medical care to sex workers, Ashley decides to confront her past… and doesn't blink.
posted by dnash (2 comments total)
Things turning darker.

Some other things I want to address:

Paul's adventure on the Hudson - I was confused at first when he looked up at the townhouse window, saw his partner, and had the cab driver take him to the cruising spot. Were we supposed to understand that Todd was having a thing with whoever he was talking to? Ultimately I don't think so - the "Inside the Episode" segment frames the whole thing as a lovers' quarrel, but I just didn't get that impression while watching.

And then, when he arrives at the cruising spot. It didn't feel demeaning or denigrating to me, but I can't speak for others. While shot in a slightly hallucinatory aspect, it didn't feel judgmental. More like, "this is a thing, a journey Paul is on." Maybe I'm missing something. I *do* feel like they're setting up some serious shit for the 3rd season set in the mid-80s.

Big Mike and Black Frankie do a job - this turn really has me scared. I like those two characters. I don't want them transformed into low-level mob henchmen.

Candy and Lori at Candy's apartment - what an amazing scene. I really have no words, except I hope Lori can navigate a way out from under CC while still doing the work that's meaningful to her. So scared about her storyline.

Finally, Frankie as a producer - does anyone else think this spells trouble? I just have a super bad feeling about him in a position of power on a production.
posted by rocketman at 11:01 AM on October 17, 2018 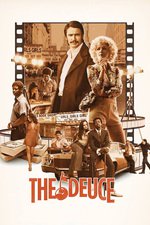