A Hawaiian girl adopts an unusual pet who is actually a notorious extra-terrestrial fugitive.

Now here comes a truly inspired animated feature named "Lilo & Stitch." How will it do? It's one of the most charming feature-length cartoons of recent years--funny, sassy, startling, original and with six songs by Elvis. It doesn't get sickeningly sweet at the end, it has as much stuff in it for grown-ups as for kids, and it has a bright offbeat look to it.

...is surprisingly unsentimental for a Disney animated feature. It keeps its edge and its comic zest all the way through, and although it arrives relatively unheralded, it's a jewel.

IGN: Inside the creation of Lilo and Stitch

Lilo & Stitch, is something of a return to the golden era of Disney, albeit with a decidedly modern slant. A bristling combo of off-kilter (and at times risqué) humor and old school animation techniques (this is the first Disney film to utilize watercolor backgrounds in over six decades) Lilo & Stitch is at once an homage to the vintage Disney animated films and a precursor of what is to come from the studio in the future. The film is the creation of writing/directing team Chris Sanders & Dean DeBlois, two guys who had previously only worked as storyboarders, production designers, and co-head of story, respectively, on films like Mulan, The Lion King, and Beauty and the Beast. The story is a mixture of vintage B-movie sci-fi cliché infused with very modern (and almost unDisney-like) views on family life (can you say dysfunctional?).

Lilo & Stitch Live-Action Remake in the Works
posted by zinon (21 comments total) 10 users marked this as a favorite
OHANA MEANS FAMILY
posted by rewil at 9:13 AM on October 16, 2018 [28 favorites]

And Family means no one gets left behind. Or forgotten.

One fun detail: David's necklace is in the shape of Maui's fishhook. I know Disney likes to foreshadow upcoming movies, but this one was released so far in advance of Moana, I have to chalk it up to it's inclusion simply being there for the cultural relevance of the makau.

Reading that Roger Ebert review in the paper got me into the theater, and it was just as he said.
posted by Pope Guilty at 10:13 AM on October 16, 2018 [1 favorite]

Previously on the blue: everything is blown up, more fun, also more real
posted by filthy light thief at 2:25 PM on October 16, 2018 [4 favorites]

Just reading that is making me cry, so...

I haven't seen this movie for probably a decade and I still hear that line clearly in Lilo's voice.
posted by Emmy Rae at 7:53 PM on October 16, 2018 [4 favorites]

That Roger Ebert review had me driving 30 miles to see it in an empty theater by myself and it was worth it.
posted by pykrete jungle at 8:19 PM on October 16, 2018 [2 favorites]

I loved that movie so much. Seeing that girl put her head in the oven made my (then adult) friend with me burst into tears. She was like “Me! That was me! Finally, someone like me is in a Disney cartoon!!” Her little brother had died when she was young and she had all the grief as a child and nowhere to put it. What she would have given to have seen herself represented on screen back then. Better late than never, though.
posted by greermahoney at 9:15 PM on October 16, 2018 [8 favorites]

My youngest daughter doesn't consider Lilo & Stitch to be a Disney film so she was surprised to see Lilo & Stitch things at Disneyland. None of my kids do. It's Lilo & Stitch, it just is, the way The Last Unicorn is that unicorn film, not at all related to other unicorn/pony cartoon things. I've watched it so many times in bits and pieces over the years that it was almost weird to watch it from start to finish again with the youngest when it was her time again.

The funniest part for me is always having to explain who Elvis is. Aliens, CIA, parental loss, fine. But Elvis? What is that?? And that always seems to end up with Elvis movie reruns and me trying to explain the appeal of his hips and 1950s music culture I don't understand to baffled children and teenagers.

I've never seen the sequel or the cartoons. I've read some of the fanfic but honestly it's such a perfect film I love it just as it is, a tiny bubble of imperfect joy.

And her sister and her boyfriend's background relationship - all the small background friendships and class politics in the film that play out in so many ways, even with the aliens, are so so deftly done. David is the very best of Disney men.
posted by dorothyisunderwood at 1:45 AM on October 17, 2018 [12 favorites]

Also you can buy your own Lilo's doll, Scrump. I would want one made by someone who loved you very much but I admit I had to really really resist buying this at Disneyland.
posted by dorothyisunderwood at 1:46 AM on October 17, 2018 [3 favorites]

This is legitimately one of the great Disney features. I'd never seen it until relatively recently when watching it with my kid and I was surprised & pleased how much heart this film has. I'd gladly rewatch this over any "classic" Disney film.
posted by Ashwagandha at 7:12 AM on October 17, 2018 [1 favorite]

I really think this film, like Iron Giant, got short shrift at the time of its release for being a 2D feature during a period when moviegoing audiences were hypnotized by the arrival of 3D animation.
posted by DirtyOldTown at 12:46 PM on October 17, 2018 [3 favorites]

We have a new puppy who CAN'T STAND when the family goes in different directions on walks. So if more than one of us is walking her on the way to somewhere else, there's always that moment just after the person with an errand peels off, where you can just see the look in our puppy's face just before she gathers all the speed there is to tear off and join them. And I know the voice in her head is screaming Ohana means family! Family means no one gets left behind!!!!
posted by Mchelly at 1:44 PM on October 17, 2018 [5 favorites]

As we sat down to watch this film last time, my 3yo said to me "Mummy try not to cry, it's happy in the end".

I did really well until

"It's little, and broken, but still good. Yeah. Still good."

I didn't think that I was going to like it, because I go through many phases when I just cannot with Disney, and I was definitely looking askance at the Elvis part of it, but man do I adore this film. Like others have said, I loved it because Lilo is so prickly and doesn't take shit and isn't concerned with being particularly feminine, and that was so much of my own childhood.

Plus I will always laugh my ass off at her spraying Stitch with the water bottle in her training efforts. That's one of my alltime favorite gifs.
posted by TwoStride at 3:38 PM on October 17, 2018 [2 favorites]

Despite the omnipresent Elvis and the Hawaiian choral music, Lilo & Stitch isn't really considered a Disney musical, with no Oscar-nominated hit song to buoy the movie's popularity. The movie nonetheless contains one of the most heartbreaking musical sequences in Disney canon, as Nani sings Aloha 'Oe to Lilo, to give comfort and say goodbye to her little sister. Nani has tried so hard, and she's failed, and now her only remaining family will be taken away from her by the state probably forever, and Nani can't even express her own despair because she has to reassure Lilo. It's a 60-second scene of a cappella singing and I can't watch it without sobbing. "Until we meet again."
posted by nicebookrack at 8:51 PM on October 17, 2018 [10 favorites]

Lilo and Stitch might be the Disney film which reflects who I am the most of any released, not necessarily because it breaks the mold of the typical Disney film (which at that time was still fighting off the legacy of the late 80s and 90s Renaissance Disney); but because of how courageously it is and isn't a Disney movie. This is a film that has more in line with Frozen, where the love of the film is familial, not romantic. It's the most realistic in creating that sense of every day burdens that everyone feels in life, dirty dishes, laundry, bills, and dealing with real problems.

It's also, hands down, the most clever of the Disney films. Be it Lilo's own amazing personality, "I'm punishing my friends," to the quick repetition of the "Blue Period" Picasso joke to the punny lei/lay joke, it's glorious. You know you're in for something when the opening introduction has the main character say something so terribly crude and uncouth in an alien language that those who hear it pass out among gasps of shock.

This movie made me appreciate Elvis more.

Stitch, himself, is amazing as a character. I still want to cry that one moment when they're surfing and Jumba tries to grab Stitch, which causes Stitch to accidentally pull Lilo under. When David kicks Stitch off, OMG, I hurt so bad for our blue six legged alien. There's so many moments in the film where your emotions alternate between laughter, spirited dancing, to heart break. "Hello....?"

Decided to rewatch this today, and I pretty much always have subtitles on - I love that when Stitch talks, it is described as "speaking native language".
posted by Emmy Rae at 10:42 AM on November 16, 2018 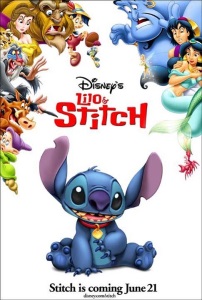