German: Die große Stille. An examination of life inside the Grande Chartreuse, the head monastery of the reclusive Carthusian Order in France.


Documentary filmmaker Philip Gröning proposed making a film about the Carthusians of the Grand Chartreuse in 1984. After sixteen years of consideration, they accepted his offer. Gröning spent a total of six months over two years with the monks, filming using only natural light and recording only the ambient sounds of the monks' activities, all by himself. Then editing of the material took two and a half years. According to Wikipedia, "The final cut contains neither spoken commentary nor added sound effects. It consists of images and sounds that depict the rhythm of monastic life, with occasional intertitles displaying selections from Holy Scripture."

Ebert: The images also open up to us gradually and quietly. We're not bombarded with fusillades of shots: "Look at this! Now this! Now this!" "Into Great Silence" unfolds with its own gentle, unforced rhythms, designed, as German filmmaker Philip Groning has said, to be less a "documentary" than a meditation.

A. O. Scott, NYT: At first, as your mind adjusts to the film's contemplative pace, you may experience impatience. Where is the story? Who are these people? But you surrender to "Into Great Silence" as you would to a piece of music, noting the repetitions and variations, encountering surprises just when you think you've figured out the pattern. By the end, what you have learned is impossible to sum up, but your sense of the world is nonetheless perceptibly altered. Scott's Movie Minute review.

Catholic World Report: The formal rigor and transcendent achievement of Gröning’s film has earned comparisons to the spiritually elevated minimalism of Robert Bresson (Diary of a Country Priest) and other filmmakers including Andrei Tarkovsky (Andrei Rublev), Carl Dreyer (Ordet), and the Dardennes (The Son). What these filmmakers share, in part, is an aesthetic effort to approach the absolute first of all by stripping away the inessential, the superficial, the superfluous. Rather than relying on cinematic tricks to manipulate the emotions, they seek through cinematic restraint to engage the spirit, to leave the viewer room to ponder larger questions of meaning rather than simply responding to stimuli.

Not all made it through. This is a good sample:

Village Voice: The point, however, is solidly made by the two-hour mark, and epiphany fatigue sets in; the more gimlet-eyed may turn to thoughts of heresy, or at least tire of exalting the supposedly pure existence of a bunch of men playing house on a hill, oblivious (and useless) to the world of need and suffering beneath them.

The New Yorker notes though that many in the Big Apple liked it, "Originally scheduled for a two-week run, the film has been extended indefinitely."

it won many awards in Europe and a Special Jury Prize at the 2006 Sundance Film Festival.

Trailer
posted by Fukiyama (2 comments total) 3 users marked this as a favorite
One of my favourites. I regret lending my DVD to a work colleague: it's been 5 years and he still hasn't returned it. 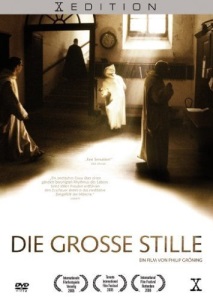