A sweeping new history of how climate change and disease helped bring down the Roman Empire Here is the monumental retelling of one of the most consequential chapters of human history: the fall of the Roman Empire. The Fate of Rome is the first book to examine the catastrophic role that climate change and infectious diseases played in the collapse of Rome's power, a story of nature's triumph over human ambition. Interweaving a grand historical narrative with cutting-edge climate science and genetic discoveries, Kyle Harper traces how the fate of Rome was decided not just by emperors, soldiers, and barbarians but also by volcanic eruptions, solar cycles, climate instability, and devastating viruses and bacteria.


A poignant reflection on humanities intimate relationship with the environment, The Fate of Rome provides a sweeping account of how one of history's greatest civilizations encountered and endured, yet ultimately succumbed to the cumulative burden of nature's violence. The example of Rome is a timely reminder that climate change and germ evolution have shaped the world we inhabit in ways that are surprising and profound.
posted by Homo neanderthalensis (2 comments total) 1 user marked this as a favorite
This book is pretty thick on science while still being largely readable. There were a few sections I had to re-read a couple of times before it sunk in, but nothing that made me want to put the book down. It's a pretty compelling re-imagining of the reasons behind the fall of Rome, the fully acknowledges that while there are some things we cannot know, in the BSG sense, this has all happened before. The book looks at climate records and harder data along with contemporary Roman accounts of famines, droughts, and disease to paint a picture of a collapse that could happen again. Chilling.
posted by Homo neanderthalensis at 1:29 PM on March 20, 2019 [2 favorites]

I'm just back from a trip to Rome so this looks particularly interesting. While I was there I was musing that empire collapse could have been something to do with the lack of non-shouty lower-case typefaces. And zeros.

It is interesting that, of all the many writers on the growth and collapse of the Roman empire - ancient and modern, there are few who have approached the subject from a scientific perspective. I also appreciate the idea that an empire might be destroyed by factors which were completely unknown at the point of destruction.
posted by rongorongo at 1:02 AM on March 21, 2019 [2 favorites] 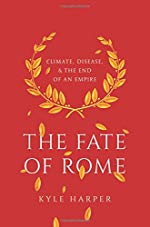