The definitive edition of the classic, myth-shattering history of the American family Leave It to Beaver was not a documentary, a man's home has never been his castle, the "male breadwinner marriage" is the least traditional family in history, and rape and sexual assault were far higher in the 1970s than they are today. In The Way We Never Were, acclaimed historian Stephanie Coontz examines two centuries of the American family, sweeping away misconceptions about the past that cloud current debates about domestic life. The 1950s do not present a workable model of how to conduct our personal lives today, Coontz argues, and neither does any other era from our cultural past.


This revised edition includes a new introduction and epilogue, exploring how the clash between growing gender equality and rising economic inequality is reshaping family life, marriage, and male-female relationships in our modern era.

More relevant than ever, The Way We Never Were is a potent corrective to dangerous nostalgia for an American tradition that never really existed.
posted by Homo neanderthalensis (2 comments total) 5 users marked this as a favorite
This book is a classic for a reason- I wish every person on every website that wants to comment about "tradition" or "family values" was required to read it first. This book is often referenced on metafilter threads so I thought it should be added to the book list. Basically everything we think we know about the "traditional family" is horsecrap. Sexist and Racist horsecrap! One word of warning the book was published in the 90s and updated slightly in 2016 but it is a little out of date. The basic thesis of the book is unchanged and still relevant, but some of the language is outdated and heteronormitive. Still- it's a classic look at the lies of conservatism and "nuclear family" that still pervade the national dialogue on women and afab folks inside and outside the home.
posted by Homo neanderthalensis at 10:43 AM on March 26, 2019 [9 favorites]

Thanks for the info about updates -- my library next door has this, but only the 90s version, but I managed to snag an interlibrary loan of the 2016 edition.
posted by JanetLand at 8:27 AM on March 29, 2019 [3 favorites] 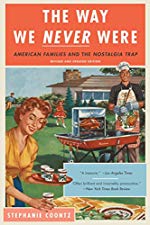