There have been ghosts on the London Underground, sad, harmless spectres whose presence does little more than give a frisson to travelling and boost tourism. But now there's a rash of sightings on the Metropolitan Line and these ghosts are frightening, aggressive and seem to be looking for something. Enter PC Peter Grant junior member of the Metropolitan Police's Special Assessment unit a.k.a. The Folly a.k.a. the only police officers whose official duties include ghost hunting. Together with Jaget Kumar, his counterpart at the British Transport Police, he must brave the terrifying the crush of London's rush hour to find the source of the ghosts. Joined by Peter's wannabe wizard cousin, a preschool river god and Toby the ghost hunting dog their investigation takes a darker tone as they realise that a real person's life might just be on the line.
posted by dinty_moore (13 comments total)
This was a pretty weird entry in the series, maybe since it’s more of a novelette, so there isn’t a lot of room for side characters and expansion. We do get some good Jaget and Abigail stuff, which is worth a book in itself, and there are some authentically chilling moments, so maybe not the strongest book, but a nice break between the tension and drama of the Faceless Man plot.
posted by GenjiandProust at 6:43 AM on April 2, 2019

I'm not familiar with Ben Aaronovitch but the description you've provided is absolutely mouth-watering.
posted by Pope Guilty at 9:05 AM on April 2, 2019 [1 favorite]

I'm not familiar with Ben Aaronovitch but the description you've provided is absolutely mouth-watering.

I'm glad! (it's the back of the book blurb) I'd probably start with the first book in the series (Midnight Riot in the US, Rivers of London everywhere else).

Honestly I think the problem still manages to be too many plots, not enough space to breathe. The first time I finished this I was really not sure how any of the scenes fit together, and even upon close reread it seemed fragmented and thinly connected. I enjoyed each scene on its own to the point where I didn't really care - extended Abigail and Nightingale scenes with Jaget backstory was fun enough.

I'm still not sure what the dead foxes had to do with the rest of the story, other than Abigail's continuing talking fox adventures. I kept on expecting them to tie into the ghost story, but it felt more like a random b-plot, which doesn't work quite as well in a shorter format.

The general theme of the book fits pretty well with The Hanging Tree's musings of family, except it's more on mentorship than having children. Peter doesn't seem to think much of it, but two years ago he didn't know who this kid was, and now he's talking to Abigail's teachers. He seems shocked that Abigail's parents seem to think of him as the responsible adult. Then there's Bev and Chess, and a few more glimpses into Nightingale's upbringing in Casterbrook (and I like how those stories seem to emphasize what we were talking about in the Moon Over Soho discussion - that Nightingale was bright but not studious or necessarily well mannered).

I was kind of surprised to find out that this book had the same publisher, since a) slightly different format; b) slightly different availability; and c) there's random footnotes for Americans in my print version? And it seriously does seem to be random. I don't think it's unusual to expect Americans to be able to convert meters to feet (multiply by three and call it a wash) and I could figure out what a National Insurance Number would be by context, but I still found myself looking up:

*misper in the context of 'teenage mispers' (missing persons, more clear later in the book)
*what 'tuck' means in context of 'comics and tuck' (still don't know, maybe food? tobacco?)
*how much a meal at Nandos cost and if it's the same thing as the chain in Chicago (about $10, and kind of except they have different websites to make it confusing)
*A map of the metropolitan line (TBH, all of these books probably could be enhanced with a map)
posted by dinty_moore at 8:16 PM on April 2, 2019 [2 favorites]

"I'm not familiar with Ben Aaronovitch..."

He wrote for Doctor Who in the 80s and his father was a senior member of the Communist Party of Great Britain. Learning this provided me with some insight into his writing and partly explained why I like these books so much. I'm hard-pressed to find a better example of a white novelist credibly and thoughtfully writing a person of color as the protagonist.

To be sure, I'm white so I cannot speak from experience, but the sorts of problematic things even I notice from other white writers with PoC characters I haven't seen at all in these books. Over time, I've gotten the strong impression that he consults with or otherwise gets a lot of input from someone who shares Peter Grant's experience.

In particular, his mother's Sierra Leone heritage and his father's jazz career, along with the keen perspective on class in London, provide a rich, vital characterization.
posted by Ivan Fyodorovich at 10:20 PM on April 2, 2019 [4 favorites]

Yes, this one is definitely odd in places and probably could have either been shorter or longer to either trim or expand some of the B-plots. It was good to get more Jaget and nice to see how the Folly can do general policing, instead of Big Bad policing - i.e. the actual case itself wasn't magical to start but the magic got involved as part of it.

Tuck is snacks (sweeties etc.) purchased from the Tuck Shop (tl;dr: in this context a small shop based at school, mostly staffed by parents and other volunteers that opens during break time. It is a thing that happens less in UK schools now though - I grew up with tuck at school in South Africa but it was vending machines and the ability to flee the school grounds when I was briefly in that aspect of schooling in the UK in the late 90s prior to ageing out to further ed. )

I think Peter is used to this sort of connection happening - Abigail is related to him through some distant cousin twice removed by second wife of uncle's nephew sort of way as it is and and they grew up on the same estate, albeit with a large-ish age gap but it does fit well with the musings on family.
posted by halcyonday at 1:23 AM on April 3, 2019 [1 favorite]

Honestly I think the problem still manages to be too many plots, not enough space to breathe.

Good point. I’ve said it before, Aaronovitch is one of the few fantasy authors where I feel he could add 100 pages to each of his novels, and it would be a good idea.

To be sure, I'm white so I cannot speak from experience, but the sorts of problematic things even I notice from other white writers with PoC characters I haven't seen at all in these books.

There’s an interview linked in an earlier thread where he talks about growing up in a neighborhood with a large Sierra Leonean population. I think he also talks about having a lot of friends read the manuscripts to keep him honest.
posted by GenjiandProust at 3:10 PM on April 3, 2019 [3 favorites]

I’m glad to hear that the fox thing wasn’t really explained because I was blaming myself there. As I get on in years, my mind tends to wander a bit. Sometimes I sort of “wake up“ and realize I’ve missed a couple lines of dialogue, or half a chapter. At the end of this one I was like but what about the foxes?? And assumed I had missed it.
posted by greermahoney at 6:30 PM on April 3, 2019 [2 favorites]

Over time, I've gotten the strong impression that he consults with or otherwise gets a lot of input from someone who shares Peter Grant's experience.

I think Aaronovitch has a son who is mixed race. He posts pictures on twitter from time to time.
posted by joyceanmachine at 6:43 AM on April 10, 2019 [2 favorites]

I am reading the first of the Peter Grant books, Midnight Riot. I'm enjoying it overall , but Aarnovitch has the annoying sexist habit of commenting on women's bodies in a creepy way. There's a character whose breasts are constantly mentioned: she crosses her arms across her breasts, her t-shirt says XXXX across her breasts, and so on. And he is sexually aroused by any casual contact with a couple of women characters--if they bump hips, for instance.

I was sighing and rolling my eyes at this bullshit, and then they interviewed a witness, "a plump round-faced woman of the sort that develops a good personality because the alternative is suicide."

I'm old and inured, but this kind of stuff contributes to the shitty environment around self-esteem for women, especially fat women. It made me think about this recent MetaTalk about recommending Georgette Heyer's The Grand Sophy, which has anti-semitic content. So many works are landmines in one way or another, and this gross variety of sexism is Aaranovitch's landmine, at least in this first book.
posted by Orlop at 1:59 PM on April 11, 2019

Oh yeah, there's a lot of that in the first book, some really shitty lines in the second, and then it mostly disappears, thankfully (the discussion on Midnight Riot/Rivers of London is here, if you want go through it). I guess the best thing I can say is that they do get better, but the gender dynamics and sexual dynamics are horrible in the first book.
posted by dinty_moore at 2:18 PM on April 11, 2019 [1 favorite]

It gets significantly more low-key in the later books. I think Aaronovitch realized that it wasn't a good look. I was actually more offended by the way that he writes Peter thinking about Miriam.

At the same time, though -- one of the tropes that Aaronovitch is very, very clearly writing against is how shittily most fiction by non-black people deals with black male sexuality. Generally, black men are either non-sexual and non-threatening (think of Uncle Tom by Harriet Beecher Stowe, or John Coffey in Green Mile), or they're hyper-sexual beasts who can't control their lusts. Peter is very clearly, and very specifically, written as a response to both of those tropes, in that he is a sexual person, and has lots of sexual thoughts, but he controls himself.

So yes, Aaronovitch goes heavy in the first book, but there's a real reason, I think, why he is specific about Peter getting erections, and Peter noticing breasts. Early on, for example, you can see how intentional Aaronovitch is about portraying Peter's sexuality when he promptly balances out Peter's crush on Lesley (a white woman) with a casual reference to how he finds Estelle beautiful -- and not Beyonce, for example, who is much closer to white beauty ideals with her light skin and hair.
posted by joyceanmachine at 2:20 PM on April 11, 2019

I can see where you're coming from (and as an aside, I do like that Bev is darker skinned than Peter - it's still uncommon to have a dark skinned black woman as the love interest in a non-fetishistic way), but I think there's a difference between showing that someone is a sexual creature and having them denigrate women that are unattractive/sexually unavailable to them. I think the description of Stephanopolous is the same issue as the line Orlop quoted above, or at least its shittiness is coming from the same misogynistic vein.

I'd like to give Aaronovitch more credit earlier on in the series, but I'm not really sure if he's earned it. And yeah, I don't really blame anyone for wanting to nope out after those lines - I might have if I hadn't known people whose taste I generally trust who were really into the later books.
posted by dinty_moore at 4:40 PM on April 11, 2019 [2 favorites] 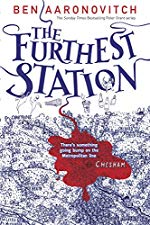