IMDB: "A look at the quick rise and influence of the controversial religious group known as The Satanic Temple. With unprecedented access, "Hail Satan?" traces the rise of The Satanic Temple: only six years old and already one of the most controversial religious movements in American history. The Temple and its enigmatic leader Lucien Greaves are calling for a Satanic revolution to save the nation's soul. But are they for real?"


Wikipedia: "Hail Satan? is a 2019 American documentary film about The Satanic Temple, including its origins and grassroots political activism. Directed by Penny Lane, the film premiered at the 2019 Sundance Film Festival and was released in the United States on April 19, 2019, distributed by Magnolia Pictures. The film shows Satanists working to preserve the separation of church and state against the perceived privilege of the Christian right."
posted by WidgetAlley (2 comments total) 4 users marked this as a favorite
I finally saw this with my local TST chapter and it was a blast! The documentary is definitely a light introduction for people who have absolutely no idea what modern Satanism is about or how it functions, so I didn't really learn much per se (as someone who's been trying to educate herself on the topic for a solid year now.) But it was surprisingly funny and uplifting, too -- Penny Lane & her editor have a really good knack for long ironic pauses and sarcastic cuts. Sometimes I get tired of all the in-fighting in modern Satanism, so it was also reminder of what, at the 50,000 ft. view, we're all fighting for, and why we choose the symbol we do. And when it hits Netflix, it will make a great introduction for friends and family members who know I'm a Satanist but don't have any clue what that means (hi, Mom!)

A bonus: the TST chapter for my state is heavily represented in the movie, so it was extra fun to see it with so many people who are in the film! Lots of whooping and hollering when our friends came onscreen.
posted by WidgetAlley at 7:05 PM on May 4, 2019 [2 favorites]

This is now on Netflix in the UK. Really worth a watch. Well put together profile of an interesting movement. A little uncritical and doesn't really get under the skin of any of the people involved in TST which felt like a missed opportunity but there's a lot charm and heart to the film.

There's also a whole film to be made about the Satanic Panic and its wider impact on contemporary Western culture.
posted by slimepuppy at 11:22 AM on December 7, 2019 [2 favorites] 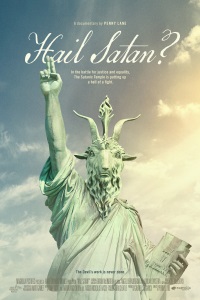