All of the novelettes (stories between 7,500 and 17,500 words) that were nominated for a Hugo this year.

“If at First You Don’t Succeed, Try, Try Again,” by Zen Cho (B&N Sci-Fi and Fantasy Blog, 29 November 2018)
“The Last Banquet of Temporal Confections,” by Tina Connolly (Tor.com, 11 July 2018)
“Nine Last Days on Planet Earth,” by Daryl Gregory (Tor.com, 19 September 2018)
The Only Harmless Great Thing, by Brooke Bolander (Tor.com Publishing)
“The Thing About Ghost Stories,” by Naomi Kritzer (Uncanny Magazine 25, November- December 2018)
“When We Were Starless,” by Simone Heller (Clarkesworld 145, October 2018)
posted by dinty_moore (11 comments total) 11 users marked this as a favorite
(as a note, I find it interesting that none of these stories were linked to the blue previously, as opposed to half of the short story nominations. I'm guessing the slightly longer length means they're less likely to go viral?)
posted by dinty_moore at 10:38 AM on May 4, 2019

I just finished reading the linked ones, and quite liked "When we were starless", with satisfying mix of strangeness and familiarity, sadness and hope.


The rest felt more like mood pieces than full stories though
posted by Marticus at 8:58 PM on May 6, 2019

I'm still waiting for "The Only Harmless Great Thing" from the library (I've had it on hold since April 5th, apparently have 4 more weeks to go), but "When We Are Starless" is definitely the most interesting of the rest of them. I appreciate the way that the worldbuilding unfolded and the lyrical style. (not sure what I was supposed to imagine Mink as, but it ended up being sort of velociraptor-like. It was the presumably bipedal with claws and a tail that did it)

I don't know if I'd call them mood pieces, but the other four had a fairly similar quality to them. I liked them all - I'd nominated "Nine Last Days of Planet Earth" and "The Thing About Ghost Stories", but none of them really stand out in the end. The order of the rest might end up being kind of random.
posted by dinty_moore at 7:17 AM on May 7, 2019

I have now twice failed to get into when we were stateless and nine last days, something about their openings doesn't work for me, I should try again at some point.

The other three are delightful, I thought ghost stories didn't quite live up to Naomi Kritzer's usual very very high bar but was still good enough to pass a high bar.

I'm torn between if at first and temporal confections for my favorite. If at first is so cozy and fun and sweet and nice and heartwarming and interesting, where temporal is satisfyingly grim and terrible, slow burn dread, with bonus justice and lushness. I like them both a lot in different ways.
posted by Cozybee at 12:48 PM on May 13, 2019

Just finished "The Only Harmless Great Thing" and I would really recommend that everyone reading this should track down a copy. It's in the voter's packet (which went out this weekend, they're included in the email about online voting being open), but even if you're not voting but still reading these for whatever reason, I'd still track it down.

The concept is everything I love about science fiction - taking discussions that have happened around science and history and ethics and running with them, and it manages to juggle three timelines without much exposition. I'm going to have to think about it for a little bit longer to be able to write about it any more, but I'm pretty sure it's my favorite.
posted by dinty_moore at 5:45 PM on May 13, 2019

Fire, Phantoms, and Other Details that Didn’t Make it into The Only Harmless Great Thing
posted by dinty_moore at 5:14 PM on May 15, 2019 [1 favorite]

I have a dead mom and my wife wears a family heirloom Claddagh ring, so between the two things The Thing About Ghost Stories landed pretty close to home, even if nothing else lines up. Oof, but in like, a really good way.
posted by vibratory manner of working at 11:06 PM on June 9, 2019 [1 favorite]

I think novelette is my favorite category. This year and last year I found the overall quality of nominees to be very high, and I enjoyed reading them the most. I think it's because a novelette is just a slightly longer short story, so you have more time to sit in it and get to know the characters, but it's not so long that I wish it had done more (*cough* novellas in general for me).

1. “Nine Last Days on Planet Earth”
This story made me a bit teary. It started out slow but eventually I was totally sucked in. I thought it was a great portrait of a life and captured well how it feels to be at different life stages (though I have no direct experience with early parenthood and beyond). The family connections were sweet while still acknowledging parental flaws, and the woven in story of the alien plants and slow-moving life forms was a neat backdrop.

2. “The Last Banquet of Temporal Confections”
This story was very tightly done and packed in great vignettes, even though the framing plot takes place mostly over one banquet. I liked the main character, who doesn't think of herself as particularly brave, but she was able to do enough quiet resistance to help lead to a tyrant's defeat. I can relate to feeling inadequate in the face of...everything that's going on these days.

3. “If at First You Don’t Succeed, Try, Try Again”
A nice stealth love story, and I got to learn about Korean folklore too. There's a sweet little follow-up at the author's blog. I really liked this story but I just felt the other two were stronger.

4. “The Thing About Ghost Stories”
Pretty good but it only loosely felt like sci fi or fantasy. I also thought the narrator's relationship with her mother was a little thinly drawn, so it lacked some emotional punch for me. I did enjoy the list of objects the narrator used to summon her mother, though. That painted a picture.

5. "The Only Harmless Great Thing"
Based on the summary alone I knew I wouldn't enjoy this book, and I wouldn't have read it except that it was nominated. Yes it's been winning all the awards. And I think I see what the author was trying to do. But I read Radium Girls and that was a slog, so a fictionalized account of it but now with elephants was uuugh. Like yes, this history is important and I'm glad I've learned about it but I'm filled with this weird dreary dread reading about it. I also didn't like the sections with the Great Mother story; I found them repetitive and didn't think they contributed enough. So the only part I found interesting was with the future elephants, but the reason for wanting them to glow doesn't hold up under scrutiny and it wasn't enough to carry the story for me. I suppose this one is likely to win the Hugo too, so I'll just be wrong over here in my corner.

6. “When We Were Starless”
Clever concept, and I think I was able to figure out what was going on. But I struggled a little to read this and didn't enjoy the process, so it gets the last spot for me.
posted by j.r at 2:41 PM on July 19, 2019 [1 favorite]

Just reread the thread again and I find it interesting that my feelings are opposite of a few of you! I've enjoyed seeing the differing opinions. Thanks for running the book club, dinty_moore!
posted by j.r at 2:43 PM on July 19, 2019 [1 favorite]

Thanks! (I'll probably do one last discussion post on Monday if anyone wants to compare the novelas/novellas/graphic novels/whatever else).

Not sure if this helps or not, but the discussion of making the elephants radioactive is probably taken from the idea of ray cats. All of the plots/themes of "The Only Harmless Great Thing" do seem to boil down to 'based on this cool thing I learned', which would probably be more annoying if I also didn't think said things were cool.
posted by dinty_moore at 10:00 AM on July 20, 2019 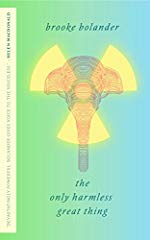