A local Pennsylvania band scores a one hit wonder in 1964 and rides the star-making machinery as long as they can, with lots of help from its manager. Tom Hanks's directorial debut!


Danielle Solzman: "The Oneders–newly named but mistaken for Oh-Nee-Ders–perform at the talent show to great success. Much to Jimmy’s dismay, Guy drummers at a faster beat than anticipated. What was a simple ballad–“That Thing You Do”–becomes an uptempo rock song. The same thing happened to a similar song from The Beatles, “Please Please Me.” I wonder what happened to those guys … On the one hand, That Thing You Do! can be seen as a parody of the one-hit wonders of the time. On the other hand, there’s so much heart and soul in Tom Hanks’ screenplay that calling it a parody would be an insult. The members of The Wonders feel very real in that I honestly want to see what they’d be doing years down the road. Sure, we have the epilogue but who doesn’t think it would be cool to see The Wonders perform on stage again?"

Jonathan Rosenbaum: "Tom Hanks turns writer-director in a pleasant and energetic 1996 feature set in 1964, about four friends from Erie, Pennsylvania, who form a rock band and have a hit, then reach Los Angeles and the big time and see what's in store for them. Hanks, playing their manager, seems to take a certain pleasure in portraying someone sleazy for a change. Though Hanks keeps the satirical and critical aspects of this look at show biz fairly light, there's a lot of conviction and savvy behind the steadiness of his gaze, and his economy in evoking the flavor of the period at the beginning of the picture is priceless. "

Roger Ebert
: "“That Thing You Do!” is the first film written and directed by Tom Hanks, and not surprisingly it is as sunny and guileless as many of the characters he's played: The movie may be inconsequential, but in some ways that's a strength. Without hauling in a lot of deep meanings, it remembers with great warmth a time and a place . . . In the annals of pop music, 1964 was a fairly innocent time. Bands broke up because of girlfriend problems, not drugs and murders. A guy could still run a record company out of his briefcase, and get air time by personal visits with disc jockeys. It wasn't all organized, it wasn't all big time, and if it was all hype, well, it's always been all hype."

Trailer
posted by Carillon (16 comments total) 7 users marked this as a favorite
I always loved this movie. It makes me happy.
posted by katieinshoes at 10:34 AM on May 9, 2019 [4 favorites]

My god, that scene where Faye hears the song on her radio, and screams down the street, linking up with the other band members as they converge on the appliance store and then crank it up and dance deliriously as the adults look on, bemused...

That scene, on its own, puts Tom Hanks in the pantheon of filmmakers. The rest of the movie is great, but man, that one, perfect scene.
posted by Etrigan at 11:15 AM on May 9, 2019 [4 favorites]

I was coming in to say pretty much exactly what Etrigan said about the "omigod we're hearing ourselves on the radio for the first time" scene.

I also got a kick out of the exchange that Guy has with the doorman at the hotel in L.A., asking him, "Is there anywhere around here where I can go to listen to really good jazz?" And the doorman takes a step back and sizes him up.

Lamarr : You want good jazz?
Guy: Yeah.
Lamarr: ....GOOD jazz.
Guy: Yeah.
Lamarr (dubious): ....Let me ask you a question. Who played coronet for Jacques St. Claire on Vital Stats?
Guy: Scotty McDonald.
Lamarr (excited): Get in this cab. GET in the CAB!

And he all but bum-rushes Guy into a cab and barks out an address to the cabbie.
posted by EmpressCallipygos at 11:32 AM on May 9, 2019 [7 favorites]

I LOVE this movie. The "Cavalcade of Stars" or whatever that state fair tour bus was called was perfect. Mr. Downtown, man.

Also liked the scene of two members playing leap frog over the parking meters in the background.
posted by TWinbrook8 at 11:34 AM on May 9, 2019

If you like this movie and have not seen the Tom Hanks' Extended Cut it's definitely worth a watch. It changes enough to make it feel like a different movie without messing with the core story. There is an entire character and story line cut that revolves around Hanks that was really great; I don't want to spoil it here. It sure seems like the theatrical cut was made to be much more idealistic, glossy, and the 1960s version of 'pure' which I do enjoy a lot as a style similar to Pleasantville or Truman Show. Those worlds never existed but they're fun to imagine living in through the movies.
posted by Clinging to the Wreckage at 12:05 PM on May 9, 2019 [1 favorite]

This movie came out when I was in middle school and at my grossest and least socially adept. But I managed to have a sleep over party for some reason or other and me and a small group of friends went to see it in the local nice outdoor mall shopping area, and we also went to bath & body works and claire's before going home to have ice cream sundaes and playing with each others' hair and staying up too late and it was all in all one of the girliest, nicest memories of that whole awful period of my life. No small thanks goes to That Thing You Do!, which absolutely set the tone. It was cute but not too cute, charming but not insincere, upbeat but slightly wry, stylish and glossy in a way that was almost attainable. An exactly perfect slumber party movie, and for that I will always hold it in my heart.
posted by Mizu at 12:17 PM on May 9, 2019 [10 favorites]

crank it up and dance deliriously as the adults look on, bemused...

A nice counterpoint to the later scene where the dad himself is drumming with the silverware or spoons.
posted by Carillon at 12:33 PM on May 9, 2019 [1 favorite]

I adore this movie! My sisters adore this movie! I learned from a librarian that this movie is a favorite with Amish teen girls. It’s sweet and genuine without being saccharine, every part is perfectly cast, and it’s so funny and joyful. Just a big warm hug of a movie.
posted by epj at 2:33 PM on May 9, 2019

The songs--including the ubercatchy title track--are by Adam Schlesinger, who is also the frontman for Fountains of Wayne and Rachel Bloom's co-head songwriter on Crazy Ex-Girlfriend.
posted by DirtyOldTown at 7:35 PM on May 9, 2019

The title song lost the Best Song Oscar to “You Must Love Me” from Evita. Wrong choice, Academy.
posted by ThePinkSuperhero at 7:52 PM on May 9, 2019 [2 favorites]

Did anyone see when Tom Hanks got the Kennedy Center Honors? They had Pentatonix come in and do That Thing You Do with rewritten lyrics to praise Tom Hanks. And it still works.
posted by EmpressCallipygos at 1:29 PM on May 11, 2019

Tom Hanks almost didn't cast Tom Everett Scott in the role as Guy - because he looked too much like a younger version of Tom Hanks and Hanks thought it would be weird. But Rita Wilson talked him into it because a) he was good, and b) she thought he was cute (possibly because he looked like a younger version of Tom Hanks). Tom Everett Scott told that story during the AFI Lifetime Achievement gala for Tom Hanks.
posted by EmpressCallipygos at 2:24 PM on May 11, 2019 [1 favorite]

Interesting tidbit: my wife went to high school with Steve Zahn, and we both worked with his mom at the YMCA.

Anyways, this is probably our family's #1 quoted movie. So good. Whenever any of us comes up with some right answer about anything, another will chime in with "What did I tell you? Smart."

Just last week as the Women's Choir walked by on their way to the stage I found myself saying, without even thinking, "You guys look great in the black outfits, have I told you that?"

And the one line I can't even type without getting weepy, "Shame on me for kissing you with my eyes closed so tight." 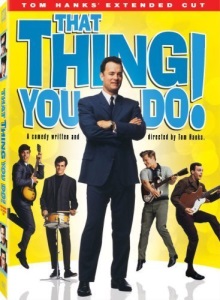