Four self-contained magical crimes, ripped from the streets of supernatural London! PC Peter Grant faces his grueling Detective exam, forcing him to relieve the strangest cases of his career. From foiling an aspiring god to confronting a Virtual Flasher, Peter's police history has been anything but conventional.
posted by dinty_moore (6 comments total)
Housekeeping question: Does anyone have a preference as to whether I post them all at once or separately? Comics conversation so far has been mostly focusing on the comics as a whole, though I'm also aware that these are separate stories with separate characters highlighted. Plus I don't think the Action at a Distance TPB has come out, if anyone is reading them that way.

The three volumes left are:
Cry Fox: Abigail focused
Water Weed: Chelsea and Olympia focused
Action at a Distance: Nightingale post-war.
posted by dinty_moore at 9:51 AM on May 21, 2019

Since the comics are getting less traction, maybe a complete post. I’m sorry I’m so far behind in commenting; I have things to say!
posted by GenjiandProust at 3:04 PM on May 21, 2019

Yes, available as packages on Kindle, if you like that. They are fairly light, story-impact-wise, but they are usually nice self-contained mysteries marred by indifferent art.
posted by GenjiandProust at 5:48 AM on May 25, 2019 [1 favorite]

I'd mentioned this earlier, but this is by far my favorite of the comics volumes. The art is the same, but the issue-long storylines seem to work better - oddly enough, it seems like there's actually more room for the stories to breathe a little and you get more fun character interactions and Peter making nerdy references. It might also be the interview format freeing Aaronovitch from having to explain the cases.

The old soldier storyline is nice mostly for Lesley and Oberon - We get more Lesley POV, and I think the end result is a little more coherent than what we get in Night Witch. I like how in the conversation with Oberon we get a conflation of treating people differently for who they are and treating people differently for what they have done --- and also a tacit sort of logic that allows for denying criminals' humanity, too. And the fact that Oberon is fairly sympathetic and is giving advice that can be taken as fighting back against Punch - which Lesley ends up doing, in a way. This is the one where a more grotesque Lesley-face would have helped - it's not just Oberon's drawing, it's also that there's never any scarring poking out from underneath the mask, no matter the angle.

The seance noir story was fun, plus random Stephanopolous backstory (the panels where Peter's narration is describing how Dollard and Stephanopolous know each other over the drawings of them at a gay bar/pride parade are Aaronovitch finally taking advantage of the comics medium and a good approximation of Peter's usual cynical narration voice and bureaucratic jargon (also, the footnotes explaining what the technical terms Peter is using actually are helpful this time around).

The virtual flasher was great for Lesley, too - we get a before-state for Peter and Lesley that really wouldn't have a place in the books. The Seawoll and Nesbitt conversation was pretty telling, too - Peter does have a talent for administration, and it's not an insult to his abilities to say so. I don't know if Peter realizes that at this point - there's the conversation about what 'thief taker' means to him and he still has the idolization of Lesley going on.

And yeah, we finally get the 'real' answer to why Peter joined the police (a question that was first poised a few pages in to the first book), and I believe it. Peter wants to help people, and he likes being able to do something.
posted by dinty_moore at 3:36 PM on May 27, 2019

Cry Fox is up.

Sticking with the one volume per post schedule since the collected trade for Action at a Distance isn't out for another six months - which would mean that I'd only be bunching up two volumes after posting the rest individually, and that just seems confusing.
posted by dinty_moore at 8:19 PM on May 28, 2019 [1 favorite] 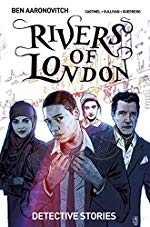