Child kidnapping is already an appalling crime, but in the latest case for Detective Constable Peter Grant--newly promoted in the ranks of London's Metropolitan Police, but with a lot still to learn about wizarding--things take a truly dark turn when the victims become prey in a homicidal hunt that Grant and the members of the Folly must stop!
posted by dinty_moore (4 comments total)
(Keeping with the one-volume-per-post posting schedule after realizing the trade for Action At a Distance doesn't come out until December - despite the last issue having been released last January. I'll never understand comics publishers' choices)

Speaking of release dates, apparently The October Man is either already out, coming out on Friday, or coming out on the 13th, depending on country, format, and possibly bookseller.
posted by dinty_moore at 8:14 PM on May 28, 2019 [1 favorite]

October Man is out on Kindle today in the US, and I am completely useless at work today as a result. Like, I'm writing business e-mails to people and halfway through, realizing that I've picked up on Aaronovitch's writing-as-the-main-character diction.
posted by joyceanmachine at 8:04 AM on May 31, 2019

I wanted to like this a lot more than I did, because Abigail* and maybe some answers about what's going on with the foxes, but we didn't really get much in the way of answers (not surprising), and Abigail felt oddly flat through the entire thing. Part of it is that she doesn't get a narration spot - Peter is narrating the entire thing, even though he's not on panel for most of the story, so we don't even get Peter and Abigail interactions. On top of that, the story has her acting unassuming for about 50% of her panel time, and the art isn't enough to make up the difference.

I guess it's fair to point out on the art front that the colorist (Luis Guerrero) has gotten better since the first issue. It's still the same high-contrast style, but it's been toned down a little bit, and there's multiple skin tones. The lineart has not, and for whatever reason, Sullivan used random stock footage of bookshelves with a warm filter on it in half a dozen pages. I'm not great at photoshop (or, well, gimp, because I'm cheap), but even I can tell you it's two more steps to at least make it less obviously a photograph. Or, just use a book spines brush. It's a weird and jarring choice that makes me think that they're expecting that nobody is actually looking at the art. Which is frustrating.

I guess I would rank it between Body Work and Black Mould. Mostly just disappointing.

Also, I've been ignoring the character design choices for the comics, because most of the time I'm just like 'no', but if that's what Reynard is supposed to look like, it makes him creeping on thirteen year-old Abigail even worse - that's not what a 25 year-old looks like.

*I was going to write that I would think that adding Abigail and Stephanopolous to anything would make me immediately want to read it, but then I thought about the possibility of Abigail and Stephanopolous having to work together for whatever contrived reason, and was immediately convinced that it would be the best thing ever. Abigail would be unimpressed by Stephanopolus and unable to figure out why Peter keeps on referring to her as terrifying. Stephanopolous would be completely fucking ridiculous to see how far Abigail would play along and not feeling material or curious about magic at all. So much sarcasm. So many embarrassing stories about Peter. 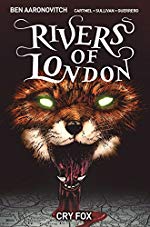