Eating one's own kind is completely natural behavior in thousands of species, including humans. Throughout history we have engaged in cannibalism for reasons of famine, burial rites, and medicinal remedies; it's been used as a way to terrorize and even a way to show filial piety. With unexpected wit and a wealth of knowledge, American Museum of Natural History zoologist Bill Schutt takes us on a tour of the field, dissecting exciting new research and investigating questions such as why so many fish eat their offspring and some amphibians consume their mother's skin; why sexual cannibalism is an evolutionary advantage for certain spiders; why, until the end of the eighteenth century, British royalty ate human body parts; how cannibalism may be linked to the extinction of Neanderthals; why microbes on sacramental bread may have led to execution of Jews by Catholics in the Middle Ages.


Today, the subject of humans consuming one another has been relegated to the realm of horror movies, fiction, and the occasional psychopath, but be forewarned: As climate change progresses and humans see more famine, disease, and overcrowding, biological and cultural constraints may well disappear. These are the very factors that lead to outbreaks of cannibalism. As he examines these close encounters of the cannibal kind, Bill Schutt makes the ick-factor fascinating.
posted by Homo neanderthalensis (3 comments total) 4 users marked this as a favorite
This book: not as gross as one would think! Joking aside this is a great if difficult book about the ultimate human taboo. Or is it? Schutt breaks down why cannibalism happens among animals and well, we're animals too. A good look is taken at the use of "cannibalism" as an excuse for genocide during colonialism, as well as the actual real deal cannibalism practiced across the globe. (Including in Europe!) There's a ton also on things ranging from placenta eating in yuppies and mad cow disease and kuru. Thankfully, the author does not go in depth on cannibal crimes, favoring science to the sensational. There is a note about how survival cannibalism may increase as climate change worsens, which is a dour but probably accurate thing for any book to end on. Glad I read it, glad to be done with it. Oh man was this a fun book to read on the bus too- lots of freaked out looks. Maybe... don't read this one on public transit.
posted by Homo neanderthalensis at 5:27 PM on June 8, 2019 [2 favorites]

Oh so medicine used to be made from the body parts of condemned criminals- the joke was James I refused corpse medicine, Charles II made his own corpse medicine, and Charles I was made into corpse medicine. Corpse medicine- it was more than eating mummy dust. WHICH WAS A THING.
posted by Homo neanderthalensis at 7:10 PM on June 8, 2019 [3 favorites] 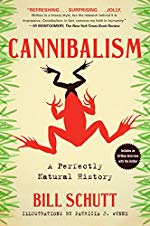