The true adventures of David Fairchild, a late-nineteenth-century food explorer who traveled the globe and introduced diverse crops like avocados, mangoes, seedless grapes—and thousands more—to the American plate. In the nineteenth century, American meals were about subsistence, not enjoyment. But as a new century approached, appetites broadened, and David Fairchild, a young botanist with an insatiable lust to explore and experience the world, set out in search of foods that would enrich the American farmer and enchant the American eater.


Kale from Croatia, mangoes from India, and hops from Bavaria. Peaches from China, avocados from Chile, and pomegranates from Malta. Fairchild’s finds weren’t just limited to food: From Egypt he sent back a variety of cotton that revolutionized an industry, and via Japan he introduced the cherry blossom tree, forever brightening America’s capital. Along the way, he was arrested, caught diseases, and bargained with island tribes. But his culinary ambition came during a formative era, and through him, America transformed into the most diverse food system ever created.
posted by Homo neanderthalensis (1 comment total) 3 users marked this as a favorite
A great book about a man not many of us have heard of- but who's influence is felt in almost every bite we take. This was the man who sent the ill fated Meyer off to explore in china, leaving us with his namesake lemon. More than that, Fairchild tried to broaden America's horizons at a time when they were closing due to fear and xenophobia. The fear of the foreign and the unknown extends to plants as well, as we sometimes discuss on the blue about the fear around "invasive" plants having the same language as old time eugenics. Fairchild had to fight for his vision of an America with better food security due to more diversity, and the work isn't over today.
posted by Homo neanderthalensis at 8:33 PM on June 4, 2019 [2 favorites] 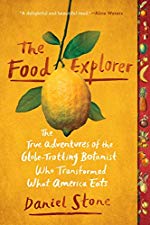