...future, planetary missions must be approved and supplied by the Company. Exploratory teams are accompanied by Company-supplied security androids, for their own safety.

But in a society where contracts are awarded to the lowest bidder, safety isn’t a primary concern.

On a distant planet, a team of scientists are conducting surface tests, shadowed by their Company-supplied ‘droid ― a self-aware SecUnit that has hacked its own governor module, and refers to itself (though never out loud) as “Murderbot.” Scornful of humans, all it really wants is to be left alone long enough to figure out who it is.

But when a neighboring mission goes dark, it's up to the scientists and their Murderbot to get to the truth.


NPR, Jason Sheerhan: Sulky, Cynical 'Murderbot' Is One Of Sci-Fi's Most Human Characters

The Verge: Sci-fi author Martha Wells on writing a series about a robot that calls itself Murderbot
posted by happyroach (25 comments total) 13 users marked this as a favorite
These are great! After the Raksura books, I jumped on these when they came out.

The series is great. Just needs more descriptions of the soaps and less time wasted on all the pesky humans running around getting into trouble.
posted by signal at 5:49 PM on June 30, 2019 [8 favorites]

I read these first. My wife was able to get them all on my Kindle with her library card, so I didn't have to pay anything. That said, I eventually bought the first one because I want to reread them, and I will slowly buy the rest. Murderbot led me to the Raksura novels, which I also like very much.

So many good moments in the whole series. Wells writes about technical and scientific systems in an interesting and accessible way that I see from hardly any other science fiction author, except perhaps Stephen Gould. You have no trouble following which system the SecUnit is accessing or hacking and how the various programs fit together, and it doesn't get boring.

Now I write a strange sentence: The last stand of the sex robots in the third or fourth novella was quite moving and I find myself thinking about it once a month or so when I read of people putting themselves in danger to save another life.

Anyway, it is a great, snappy series that does a lot of things well, and don't overlook digital library services if you balk at paying $3-9 each for small novellas.
posted by seasparrow at 9:41 PM on June 30, 2019 [4 favorites]

I associated way too much with this robot with social anxiety and pesky emotions.
posted by dinty_moore at 1:46 PM on July 1, 2019 [6 favorites]

I just started reading the fourth novella; I've been reading them as my library gets them in as ebooks.

The SecUnit's social anxiety was a standout theme for me. I can very much relate to the desire to operate behind a helmet. The last paragraphs of the book, detailing the note the SecUnit writes to the humans, were quite affecting.
posted by audi alteram partem at 2:41 PM on July 1, 2019

Would it be too much to ask for a Sanctuary Moon spin-off series? I imagine General Hospital meets Space 1999. Perhaps the reality would not live up to the dream.
posted by GenjiandProust at 4:24 AM on July 2, 2019 [6 favorites]

Gotta thank you Happyroach. I read this novella after it was posted here and LOVED it.
posted by miss-lapin at 10:53 PM on July 2, 2019 [1 favorite]

I had tried to get into her other books earlier and never did, so it took me a long time to agree to try Murderbot, but I loved them all. So fun and charming.
posted by jeather at 5:00 AM on July 10, 2019 [1 favorite]

Would it be too much to ask for a Sanctuary Moon spin-off series?

I just devoured all four novellas over the last couple days thanks to this post, so allow me to expound on my Thoughts. It's not clear if this discussion is going to encompass all four or not, so I guess I'll keep my thoughts limited to stuff that doesn't spoil the rest of the series too much.

1) I get that Murderbot's decision to slip away at the end is fueled by his anxiety rather than rational thought, but come on, dude. Sure, Preservation Alliance is a fully automated luxury gay space communist society, but you met these people in a scenario where they were all moments away from getting extremely murdered. Chances are those kinds of scenarios come up a lot. There will be plenty for you to do there.

2) This isn't limited to the first book, but it's not much of a spoiler either. What is the deal with bot pilots? They evidently don't have anything like Murderbot's governor module and are pretty much free to pursue their own interests regardless of if those interests are in their programming or not. Do people just not realize bot pilots can do that? Bot pilots supposedly have programming against space pirates, but since they don't have a specific rule against strange constructs it's fine to let them on board? The only time Murderbot hacks a bot pilot is when it's one that's too limited to barter with. Also, how do weaponless crewless drone cargo ships ply the spacelanes unmolested when every other aspect of this universe is depicted as violent anarchocapitalism? Bot pilots supposedly resist attack via any means necessary but what could they possibly do to discourage a determined pirate crew?

3) Murderbot's hacking skills are pretty impressive. I wonder why nobody ever thinks to weaponize a hacker construct like that. (Note: We find out why)

4) I wasn't 100% in love with Murderbot until he reveals the reason why Sanctuary Moon is his favorite serial. That was so sweet and innocent that my heart immediately melted.

5) I wonder who would win between Murderbot and a T-800. They seem pretty much even as cybernetic humanoid killing machines. Somehow, a terminator manages to be more social. (Murderbot totally looks like Arnold, you can't convince me otherwise)
posted by Mr.Encyclopedia at 7:09 PM on July 16, 2019 [2 favorites]

In terms of the bot pilots, it seems (at least from Murderbot's perspective) that human really don't think about what the interior lives of the AI they create is like. The idea that a bot pilot might be bored or want to entertain themselves with something like a serial has pretty clearly not occurred to them.

I love these stories so much that, despite being one of the cheapest men ever to walk the planet, I never hesitated for a second to drop the coin for each successive novella. Having the ability to do so is a luxury not everyone has, I know, but personally I think they were worth every penny.

One of the things this story does really well, and subsequent ones too, is create some real stakes despite Murderbot's nigh invulnerability. Maybe it's a matter of having spent so long in superhero comics fandom, but I can't count how often I see godlike figures have to hold the idiot stick or fall through ridiculous coincidences in order to place a real challenge in front of them. I never felt that way once in this entire series. The stakes may or may not be existential but they always felt threatening to Murderbot.
posted by phearlez at 8:51 AM on July 18, 2019 [4 favorites]

I also love Murderbot! It's interesting to me that an earlier comment in this thread referred to MB with male pronouns. I always kind of thought of MB as female, that's how I heard their inner voice, but I'm pretty sure the character is very specifically and pointedly non-gendered, so we're both off base really.
posted by slappy_pinchbottom at 8:50 PM on July 18, 2019 [12 favorites]

Yeah, Murderbot uses "it" as a pronoun throughout all the novellas IIRC, which makes me somewhat uncomfortable, which is I suppose the point. You're sentient, Murderbot, I don't want to call you an "it"! I get why Murderbot might pointedly want to be referred to as an it though, and the choice certainly told me a lot about Murderbot as a being. Personally, I try to use "they/them" pronouns for Murderbot, but admit that my automatic tendency is to think of Murderbot as female. Maybe because I read Leckie's Imperial Radch series first.
posted by yasaman at 11:39 AM on July 19, 2019 [6 favorites]

If I recall correctly, Murderbot is also misgendered as female by outside observers. (I also use they/them for murderbot but sometimes have to correct myself away from she/her).

Autonomous also does this - there's a robot who doesn't really have a gender, but is first misgendered as male (because big gun robot), then misgendered as female (because had a brain that used to belong to someone who was female as extra CPU).
posted by dinty_moore at 11:50 AM on July 19, 2019 [1 favorite]

I initially thought of Murderbot as female, but by the end of the first novel was comfortable referring to MB is as "it."
posted by miss-lapin at 2:49 PM on July 19, 2019

The preorder button is up and working for Network Effect, if that's your thing. Publishing date is still May 2020.
posted by dinty_moore at 8:40 AM on September 5, 2019 [1 favorite]

As one who grew up on Asimov's robots, I found Murderbot delightful. The new Turing/trust test, about the space soaps?--"That's a fucking lie"--was hilarious, and I'd imagine Murderbot delivers that line with some heat. ASR felt like a...well, not quite a dismantling of classic sci-fi, and not quite a re-imagining, but I liked the way the novella compressed the world-building and started from there, meeting Murderbot where it is. "Granted, I liked the imaginary people on the entertainment feed way more than I liked real ones, but you can't have one without the other" packs so much into a single sentence, and a SecUnit able to articulate this is more interesting to me than lengthy descriptions of trade federation disputes or architectural plans for an enemy star cruiser.
posted by MonkeyToes at 7:32 AM on May 15, 2021 [1 favorite]

Yeah, Murderbot is explicitly not just agendered but asexual (though possibly not aromantic). I personally use they/them for MB, but they use it. 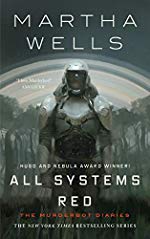