Only Superman and Supergirl stand between Rogol Zaar and the utter annihilation of the Kryptonian race. Meanwhile, Kal-El faces a completely different challenge in his adopted home city of Metropolis, where Clark Kent still lives and works--but without his wife and son.


Brian Michael Bendis begins his work on Suoerman. This collection contains The Man of Steel #1-6 and stories from DC Nation #0 and Action Comics #1000.
posted by DirtyOldTown (3 comments total)
Weird! I'm right in the middle of reading this because someone I know pushed it on me. I can't say I really "get" Superman comics. I hope we eventually figure out why Rogol Zaar is trying to kill every last Kryptonian, since his original anti-imperial explanation doesn't seem like it would motivate his ruthlessness. I think my favorite thing about this book is the way Superman's distinguishing feature is that he's just really, really, a nice guy, and Bendis manages to convince me that's still a possible thing in this cynical world of 2019 where our main comic book heroes are flawed Marvel characters.
posted by Harvey Kilobit at 11:04 PM on August 3, 2019 [1 favorite]

I am just starting this, too, and posted this in hopes that others might have reactions I could compare notes with.

I will say this, though. If I was recommending a place to get started with current Superman comics, I'd direct people to the first volume/collection of Action Comics from the Rebirth launch, Path of Doom.

This was pretty entertaining. Bendis acquitted himself pretty well and despite the usual Bendis-isms (the bulk of the Lois/Jonathan/Jor-El storyline was a patented Bendis Characters Standing Around and Arguing scene), it flowed pretty well.

The thing that I was impressed by and did not expect from Bendis was how well he seemed to understand Superman as a character. It's his very first storyline and he's already got him knee deep in problems he cannot punch his way out of, and mired in complicated decision making that cannot be solved by simply being pure of heart.

I also loved the repeated gag of people being surprised/confused/mildly offended by him flying off without a goodbye. This was capped by Batman saying flatly, "If the politest person in the galaxy flies off without the time to say goodbye, you can assume there's a very good reason for it." I also liked how self-aware Superman is of the interpersonal slack he gets as Superman, such as where he was terse to Green Lantern, knowing he'd be forgiven but starting to wonder if that really made it okay.

Also fun was the attention paid to the finer points of how Superman's super hearing works. The scenes with the villain's discussing which phrases Superman is perpetually listening for was great, as was the flirty fire chief realizing that her aside muttered as Supes flew away was still something he heard.

The villain's design is not great, sort of one of those sludgy Doomsday types. But his fighting style is interesting.

All of this said, I want to qualify this praise. I think Bendis more or less lives up to the high standard set by Dan Jurgens in the rebooted Rebirth-era Superman comics. I do not think he betters it in any way.

In fact, my one serious complaint is the de-emphasis of Clark's family life, which was one of the freshest, most entertaining wrinkles of the Jurgens run. I'm actually concerned that Jonathan's excursion into space with Jor-El is going to end with some kind of shitty reboot that makes him less of a scrappy, fun kid.

Well, two complaints. It was also super weird that Jor-El returned from his recent run as a villain and is now entrusted to raise Jonathan for the summer.

But then, that kind of about face is standard in comics, particularly when there is an authorial change.
posted by DirtyOldTown at 8:26 AM on August 4, 2019 [1 favorite] 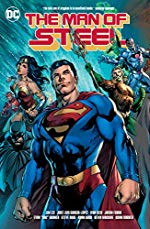