The wives of New York gangsters in Hell's Kitchen in the 1970s continue to operate their husbands' rackets after they're locked up in prison.


Starring Melissa McCarthy, Tiffany Haddish, and Elisabeth Moss in a particularly striking turn, this movie is based on the Vertigo graphic novel. The women, largely abandoned by their lazy and dimwitted mob "family," move to supplant their operations so they can pay the bills, and find themselves developing their own individual tastes for power. Lukewarm reviews by critics that seem to reflect more of an inability to accept the premise (including--heavens!--the idea that characters in a mob movie doing unsympathetic things might be treated sympathetically) than the merits of a solid if slightly clunky mob film.
posted by praemunire (9 comments total) 1 user marked this as a favorite
20% on RT. And Rolling Stone calls it "an early contender for worst of the year."

Would love to hear from someone who actually saw it. No fear of spoilers, either. (obviously, or I wouldn't come in here.)
posted by DirtyOldTown at 4:49 PM on August 11, 2019

I saw it. By no means it is in any danger of being worst of the year. Tastes being subjective as they are, I would let anyone who called it "fair-middling" pass without dispute--there are definitely some adjustments I would've made to the script--but I found it a perfectly enjoyable film if you are ready to make the usual stipulations for a mob film. A lot of the negative reviewers seem to have choked on (a) "wOmEn mObSTerS?!!?" and/or (b) on the idea that because the women are initially depicted as quite victimized in a world that victimizes all women, and do not consider themselves in their own minds to be doing wrong, that somehow the film is just giving them some kind of unearned moral pass (of the kind that surely no other mobsters ever in the history of film have ever gotten).

Like, they kill a lot of people, not all of them obviously in self-defense (there's one hit in particular of someone who's not a "soldier" that is purely economically motivated). Many reviewers seem to have thought that either (a) that this couldn't be meant to be unsympathetic, because they're abused women! So it must be supposed to be fine! or (b) that, ugh, female power is so unattractive when it involves murdering people.

One fair critique is that the movie dodges the hell out of the race issue by displacing it further north.
posted by praemunire at 5:21 PM on August 11, 2019 [6 favorites]

Cinematography was uninspired at best - many scenes looked exactly like Your Generic Comedy Movie of 2010. There were occasional well-lit shots but not enough to offset the feeling of fake-ness that came from the rest of the film.

The story wasn't bad, it just needed a lot more room to breathe - like 8 hours on HBO or something along those lines.

In fact, if you gave this story to the people creating The Deuce and asked them to handle it - no casting changes, no plot changes, just fleshing it out and maybe fine-tuning the dialogue? Oh and doing a better job with the camera and lighting?

well at that point it would be a whole different beast, say 90% of the ship of Theseus. But I'd watch it.

I wonder how much it suffers in comparison to Widows--I know my first response to this was, "wait, didn't that movie come out last year?"
posted by TwoStride at 11:17 AM on August 12, 2019 [1 favorite]

This one doesn't have any dog torture in it, so I got to watch it. That's, unfortunately, the extent of my ability to compare it to Widows, which otherwise looked cool.
posted by praemunire at 2:23 PM on August 12, 2019

I thought it was an above average mob movie, but with female leads, apparently that makes it the worst movie ever?

I liked it more than most mob movies, because the characters had motivation beyond like pure stylish toxic masculinity. But that's why "THAT GUY" has a scarface poster up. because he's that guy who like movies.

The cinematography is not great. It looks more like TV than a film at times. But yeah I absolutely don't get the RT score. Other than the obvious I don't get what's so hate-able about it.
posted by French Fry at 5:19 PM on August 12, 2019 [1 favorite]

widows was better, but I think we can afford more than 1 female organized crime movie every five years right? like is there a mandatory waiting period I'm unaware of? Like when "the irishmen" comes out people aren't going to be filling their reviews with complaints that there was JUST another male lead mob movie last year! mr scorsese, wait your turn buddy.
posted by French Fry at 5:22 PM on August 12, 2019 [1 favorite]

The first time I saw the trailer for this my immediate thought was to wonder which of those three actresses wanted the lead in Widows but lost out to Viola. I guess I'll wait for this one to come out on DVD.
posted by fuse theorem at 6:12 PM on August 12, 2019 [1 favorite]

Seconding praemunire. Entertaining version of a typical mob story from the perspective of women vying for power. Three excellent lead performances...well, four counting Margo Martindale. Plus, a sweet little critique/reference to (spoiler in link) The Sopranos.
posted by Cheezitsofcool at 11:44 AM on August 20, 2019 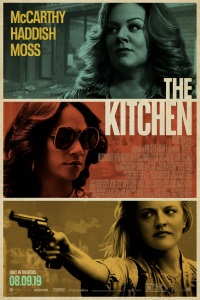