Sixteen years after René Descartes' death in Stockholm in 1650, a pious French ambassador exhumed the remains of the controversial philosopher to transport them back to Paris. Thus began a 350-year saga that saw Descartes' bones traverse a continent, passing between kings, philosophers, poets, and painters. But as Russell Shorto shows in this deeply engaging book, Descartes' bones also played a role in some of the most momentous episodes in history, which are also part of the philosopher's metaphorical remains: the birth of science, the rise of democracy, and the earliest debates between reason and faith. Descartes' Bones is a flesh-and-blood story about the battle between religion and rationalism that rages to this day.
posted by Homo neanderthalensis (1 comment total) 4 users marked this as a favorite
So this isn't a new book, this is an old one, one I re-read from time to time. It's a fascinating tale of what happened to the actual physical skeleton of one of the west's most famous philosophers and how that tale of frank grave robbing occurred during the height of the French revolution. This book posits, using Descartes' own life (and death) that the "battle" between religion and rationalism isn't quite as stark as it seems, and there is a very nice comparison to the concept of Cartesian duality and how we now consider that bunk and the concept of faith and reason being polar opposites. (Not so much) This book is no more an atheistic polemic, anymore then it is religious apologia, and is as much a book for the amateur philosopher as it is for the baby osteologist. One of the best books on my shelves.
posted by Homo neanderthalensis at 10:54 PM on September 4, 2019 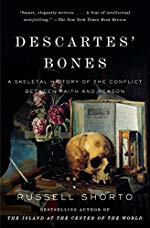