Filled with colorful characters and history, Double Entry takes us from the ancient origins of accounting in Mesopotamia to the frontiers of modern finance. At the heart of the story is double-entry bookkeeping: the first system that allowed merchants to actually measure the worth of their businesses. Luca Pacioli―monk, mathematician, alchemist, and friend of Leonardo da Vinci―incorporated Arabic mathematics to formulate a system that could work across all trades and nations. As Jane Gleeson-White reveals, double-entry accounting was nothing short of revolutionary: it fueled the Renaissance, enabled capitalism to flourish, and created the global economy. John Maynard Keynes would use it to calculate GDP, the measure of a nation’s wealth. Yet double-entry accounting has had its failures. With the costs of sudden corporate collapses such as Enron and Lehman Brothers, and its disregard of environmental and human costs, the time may have come to re-create it for the future.
posted by Homo neanderthalensis (1 comment total) 10 users marked this as a favorite
This is a good book about something a lot of us don’t think about but that impacts a lot of our lives. From its origins in the Arab world to the Italian who brought it to Venice, our modern numeral system and double entry bookkeeping is a system that changed the world. Perhaps... not for the better. A sharp look at how being able to codify things better led to capital becoming capitalism, and the costs of doing business being the sort of thing that we all pay for in the end. If I have one complaint it’s that each chapter in this time could have been expanded into a book in its own right, and that’s not a bad thing.
posted by Homo neanderthalensis at 10:01 AM on September 9, 2019 [3 favorites] 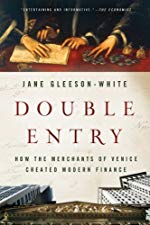