(This is for the first book, see below) In his four-volume series Return to Nevèrÿon, Hugo and Nebula award-winner Samuel R. Delany appropriated the conceits of sword-and-sorcery fantasy to explore his characteristic themes of language, power, gender, and the nature of civilization. Wesleyan University Press has reissued the long-unavailable Nevèrÿon volumes in trade paperback. The eleven stories, novellas, and novels in Return to Nevèrÿon's four volumes chronicle a long-ago land on civilization's brink, perhaps in Asia or Africa, or...


(I accidentally created a FanFare post for this book and immediately began posting about Neveryona, the second book. The mods are working to change that thread to point at the correct ISBN / ASIN).

Wikipedia: Tales of Nevèrÿon is a collection of five sword and sorcery stories by Samuel R. Delany published in 1978. It is the first of the four-volume Return to Nevèrÿon series and contains the stories "The Tale of Gorgik," "The Tale of Old Venn," "The Tale of Small Sarg," "The Tale of Potters and Dragons," and "The Tale of Dragons and Dreamers."

Venn and Gorgik appear in various ways in the second book as well. I assume there may be other character overlaps.
posted by mwhybark (1 comment total) 1 user marked this as a favorite
The Tale of Gorgik

I enjoyed this. It was sort of interesting to me to note how it examined the SF trope of the exceptional individual in a novel setting. This Gorgik has yet to become the Gorgik of the second book, I think.

The Tale of Old Venn

What a complex piece of writing. We will learn more, third hand, of Venn and her Neveryona friend, whom I take for Belham, in the second book, and there, we will also meet Norema again.

The use and explanation of the Ulvayn word “gorgi” naturally leads one to wonder if and in what sense Gorgik may be a cognate.

A recurrent theme in these books seems to be the idea that elements of culture and economic life are literally just being invented, or were invented yesterday, or last year, by the characters in the stories. I think this is intended as literal within the boundaries of the imagined world-setting but also is depicted as slippery and cyclic, such that the amount of relatively recent time from the invention event to the theoretical current moment of the story is inherently unknown and unknowable to the characters.

Venn’s long discourses on life among the Ulvayn, and her detailed and affectionate descriptions of Ulvayn lifeways and styles of dress are clearly intended to remind the reader of anthropology texts and narratives. I wonder if Delany had a specific author in mind?
posted by mwhybark at 6:41 AM on September 28, 2019 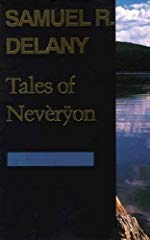