A comedy/musical utilizing both new songs and parodies from the original (Gilbert and Sullivan's Pirates of Penzance), as well as references to popular films of the time, including Star Wars and Raiders of the Lost Ark.


In your typical boy meets girl, boy loses girl, boy fights girl with swords plot, the story revolves around Mabel, the youngest of Maj. Gen. Stanley's many daughters, and Frederic, an ex-Pirate of Penzance. They fall in love and proceed to retrieve the Stanley's fortune from the Pirates (stolen 20 years ago). The Pirate King informs Frederic that due to him being born on Feb. 29th (during a leap year), Frederic is still technically the King's apprentice. Frederic must then decide between duty and honor, the only good qualities the King taught him, and true love.

One of three musicals filmed in Australia between 1981 and 1982, it resulted in a single that reached #71 on the US Billboard Hot 100 ("How Can I Live Without Her", supposedly sung by Christopher Atkins but actually dubbed by screenwriter Trevor Farrant). It also generated more Razzie nominations than any other Australian movie (9 nominations, 2 wins).

The Pirate Movie has a 9% fresh rating from critics, per Rotten Tomatoes, but an audience score of 76%. While not a box office success ($9M USD box office on a $6M USD budget), frequent showings on HBO in the 80s helped generate a cult following.
posted by hanov3r (8 comments total) 4 users marked this as a favorite
"One of three musicals filmed in Australia between 1981 and 1982" was not a category I had previously considered. Needless to say, I haven't heard of this film.

Fun fact: there was a British remake of The Pirates of Penzance in 1983.

One of the two Australian musicals (that I could find) from 1981 and 1982 was The Return of Captain Invincible (starring Alan Arkin and Christopher Lee). The other one doesn't appear to be listed in Wikipiedia's category of 1980s musical comedy films, or Australian musical films (the latter doesn't even list The Return of Captain Invincible, so I realize Wikipedia is not an authoritative source here).
posted by filthy light thief at 10:00 AM on October 9, 2019

I can't read "the Pirate King" at this point without thinking of Brian Blessed in The Pirates! Band of Misfits.
posted by Chrysostom at 10:15 AM on October 9, 2019 [1 favorite]

The other Australian musical that year was Starstruck, which had a song that hit #5 on the Australian charts ("Body and Soul", written by Tim Finn of the Split Enz).
posted by hanov3r at 10:45 AM on October 9, 2019 [1 favorite]

In 1980, as part of Joseph Papp and the Public Theater’s Shakespeare in the Park program, Papp staged a production of Pirates in Central Park that summer.

The production then moved to Broadway, where it ran for 787 performances, and won a whole bunch of Tonys. It starred Linda Ronstadt, and Kevin Kline, who basically became a star based on his performance.

The Broadway version was turned into a film in 1983. However, that movie was beaten to the punch by this quickly-made cash-grab of a movie. Possibly due to confusion on the part of audiences, the Klein-Ronstadt movie was a major box-office flop. Which is a shame, because it’s far better than this movie.
posted by 1970s Antihero at 5:27 PM on October 9, 2019 [2 favorites]

I was barely a teenager at the time. My three new teenage stepsisters were obsessed with this movie.

Me, I thought it was a cute-ish attempt at a modern Gilbert & Sullivan, but mostly I just liked that Christopher Atkins doesn't wear many shirts in it.
posted by dnash at 12:44 PM on October 10, 2019

I was barely a teenager at the time

I was 15 when it came out. This was the first movie that I ever won tickets to off a radio call-in contest, so I got to see the DC premiere and bring home a souvenir copy of the vinyl soundtrack.

The second former-Mrs.-hanov3r and I, despite an age difference, bonded over this movie when we met (she'd seen it a billion times on HBO). We've quoted bits at each other, sung the songs to each other (when we lived in VA, where thunderstorms are not infrequent, "Tarantara" became "Torrential Rain"), and put "Happy Ending" on the mix CD we handed out to wedding guests.

I actually didn't realize until much later how much of the original G&S lyrics had been kept.
posted by hanov3r at 2:18 PM on October 10, 2019 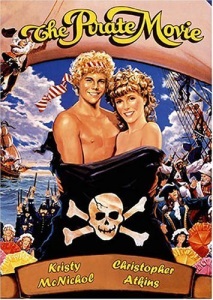