Detectives from the present and a detective from the past communicate via walkie-talkie to solve a long-time unsolved case. (Netflix, tvN Korea)


Dramabeans show page, Episode 1 recap, and episode 16 (finale)
posted by oh yeah! (7 comments total)
There was so much I loved about this series. For a time-travel (sorta) show, they kept the structure pretty solid and without paradox. The only one I can't figure out is what made the original Gyeonggi serial killer stop killing in the original timeline. Since the past was changed by 2015 Hae-young's transmissions to 1989 Jae-han, leading him to cause the killer's paralysis, wouldn't he have gone on killing if there'd been no interference? But other than that, I thought the plotting was really tight.

I am somewhat frustrated at the ending though. I feel like the whole season was building to the point of Jae-han and Hae-young finally being in the same year and meeting face-to-face instead of over the radio (not to mention 2015 Soo-hyun reuniting with Jae-han, but, there at least they got that hug in 2000), but they went all open-ended cliff-hangery instead. I guess they were going for more of a 'the fight against injustice never ends'/'we want to make season 2 someday' ending, but, they could still have ended with the 3 characters onscreen together.
posted by oh yeah! at 12:44 PM on October 20, 2019

Ooohhh, this show (and the half-dozen other shows inspired by the true crime mystery) was brought up recently among my peer group since the real Hwaseong serial killer was actually discovered last month thanks to old DNA evidence.

Kim Eun-hee is one of my favorite drama writers (she's also the writer of Kingdom -- also on Netflix, with the second season to be supposedly dropping early next year!). I loved that Signal redeemed her previous drama, the mildly lackluster Three Days, which had me worried that she was losing her intensity and skill at plotting and crafting unique characters.

I also love director Kim Won-seok's work. He has a fabulous way of showing us a world that makes small, quiet, and often mundane moments feel so important -- although I never got over the weird aspect ratio switch between the present and the past.

But I didn't love the show nearly as much as everyone else did at the time, especially when 2016 was such a good year for dramas, so it was hard for me to be convinced that this was The Best Drama of the year. I only vaguely remember how it ended (but was pleased that everyone lived, since this writer usually has no qualms killing off characters).

I recall having some time-travel quibbles, since I assumed the hilarious set up in the beginning (where one of the most famous celebrity power couples weren't even together, and the so-called "Misaeng love-triangle" that never actually happened) would mean that the original timeline Lee Jae-hoon's character was in would turn out not to be the "real" timeline. I mean, why would they put such emphasis on celebrity news that viewers will know isn't accurate, thus hammering home that the initial 2015 timeline isn't the one we're used to, if we weren't going to circle back to it?

But overall Signal was definitely excellent and I often recommend that people watch it when they ask for drama recommendations, especially if they haven't watched any Korean dramas before.

It seems like every few months a rumor will go around about another season, but I don't think there's been anything official. Kim Eun-hee said in an interview she could see how there could be another season, and would be willing to consider writing it only if the original cast agreed to come back, but that was a couple years ago and I doubt it will ever happen.
posted by paisley sheep at 12:25 AM on October 21, 2019

Paisley sheep, do you know what "hyung" means? In the dramabeans recaps, they kept calling Hae-young's brother that, but when I plug the word into google translate it doesn't return anything in English.
posted by oh yeah! at 7:48 PM on October 23, 2019

"Hyung" (형) means "older brother," but only if the younger person is also male. This can be a brother by blood or a close relationship (friend, mentor, etc).

Thanks! How about "Sunbae", does that have any special nuances when Soo-hyun says it to Jae-han? The subtitles translate it as "senior", but I don't remember if 2015 Hae-young uses that same word when he tells Jae-han that 2015 Soo-hyun is now his senior, and I'm pretty sure Dramabeans only uses it for Jae-han in relation to Soo-hyun.
posted by oh yeah! at 12:40 PM on October 25, 2019

Sunbae (선배) does mean senior, in that it signals that someone has more experience and knowledge (typically in an academic or work environment). It's respectful but slightly more casual than calling someone by their official title or Mr./Ms. Family Name.

In a hierarchical society like Korea, people rarely refer to each other with their given names, since that connotes a level of intimacy that you have to earn first. Unless you are older (like a sunbae!) then you can speak informally to your hoobae (후배) even though they will have to speak formally to you because you are further along in the hierarchy.

I can't remember how sunbae was used in this drama, but I am assuming because Soo-hyun had big ol' heart-eyes for Jae-han and practically forced him to become a mentor, she would have said "sunbae" (but secretly meant "oppa" in her heart!). I'd have to watch it again to see what word Hae-young uses to describe Soo-hyun.

Here's an old glossary on Dramabeans that I don't think has been updated in years, but used to have its own prominent page at least a decade ago on their old site when it was just Javabeans recapping shows she wanted to talk about with other people. It may come in handy if you decide to be sucked into dramaland!
posted by paisley sheep at 1:44 PM on October 25, 2019

Ahaha and I just noticed I said "signals" without even meaning to. Plz excuse my accidental pun.
posted by paisley sheep at 2:04 PM on October 25, 2019 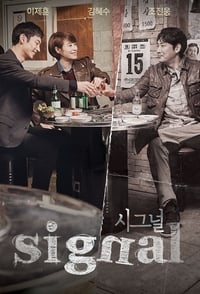