In a world where terrifying, capricious gods once walked the earth, enslaving and brutalizing millions, three unforgettable protagonists struggle to come to terms with the mysteries these divinities left behind— and to make sure these cruel masters do not rise again.
posted by Cozybee (15 comments total) 8 users marked this as a favorite
Oh, I loved this trilogy. I loved the world and the characters -- it felt really unusual, as a setting.
posted by jeather at 12:16 PM on October 23, 2019 [3 favorites]

I didn’t realize there was a third book! Reading that immediately. Great treatment of colonialism.
posted by bq at 2:25 PM on October 23, 2019

I quite liked the first one, but the others have been lurking in my TBR pile. Sounds like they hold up?
posted by Chrysostom at 9:16 PM on October 23, 2019

I personally thought that the second was the weakest of the three (by which I mean it was good rather than great), but that the third was easily as strong as the first.
posted by kyrademon at 10:35 PM on October 23, 2019

I was so excited to read these! The first book was a MetaFilter recommendation that found its way onto my library list, and I was hooked immediately. There was something really familiar and comfortable with the writing style. Made me think of Joe Abercrombie books, which I also really loved. Pace was great, characters were super engaging, and I would find myself staying up late to finish just one more chapter.

I didn't expect to like the second as much as I did, but the main character was a goddamn delight. In fact this was a very nicely character-development-heavy series, which has been kind of rare for the genre (in terms of books I've read before). Usually there is so much world building and telling-not-showing that it feels like the characters are decorations. I for sure enjoyed that everyone's motivations were logical, thought processes understandable, etc. even though the world was magical and weird.

And I cried at the end of the third book so yeah, it got me.

Yeah, these were really good. The kind of book that I highly anticipate, deeply enjoy, and regret finishing. There are far fewer of those these days, it seems to me. (BTW, erratic meatsack, there's a new Abercrombie book; I loved it.)
posted by Ivan Fyodorovich at 5:32 PM on October 24, 2019 [1 favorite]

I looked at the Kindle sample of the first book, got hooked, bought it and am now half-way through. Dammit, I'm supposed to be really busy with work right now!

P G Wodehouse compared his experience of reading George MacDonald Fraser's first Flashman novel to Keats on Chapman's Homer - "If ever there was a time when I felt that 'watcher-of-the-skies-when-a-new-planet' stuff" - and whilst I wouldn't quite go that far Bennett is definitely going on my must-read list.
posted by Major Clanger at 3:04 AM on October 25, 2019

I really really liked these: they felt rather post-WWII to me, for some reason. But I second the praise for their treatment of colonialism.

About three-quarters of the way through City of Stairs and very much enjoying it.

Mind you, that means I've reached the part where I thought "Ah, SCP."

Some aspects of the world-building took me out of the narrative a bit. The world of Bulikov and Saypur is never named, but seems not to be our world (even with a different history and a fantasy/magical setting). But not only is the cultural setting clearly a deliberate analogue of some Earth cultures - it is hard not to see Saypur as post-Raj India - but Bennett frequently uses familiar cultural references. Characters use terms like "what on earth...", one is described as having an engagement ring stone so extravagantly large it's compared to a whisky tumbler, and Shara asks at one point for a thermos of tea. That's not just a common real-world term, it's a brand.

As I said, such references jarred with me a bit, although I rationalised them by assuming that Bennet was doing what TV Tropes refers to as 'calling a Smeerp a "Rabbit"', that is to say he was using a (for his readers) familiar term or cultural reference as a readily-understandable equivalent for whatever one his characters would have used in their world. I can perfectly well believe that Saypur had a counterpart to Dewar, that vacuum flasks have become a commercial success, and that there's even a well-known make with a name that's become a generic term for them but which would be meaningless to us so Bennett used 'thermos' for it because readers would know instantly what he meant (and what it conveys about Shara.)

There were distinct echoes of Pratchett in the revelation of the nature of the Divinities. On the Discworld, gods arise and become more powerful depending on the extent and fervour of belief in them, or diminish if it wanes (cf Small Gods in particular, although its a recurring theme as it's a core mechanic of how the Discworld 'works'). Kolkan is very reminscent of Nuggan, the Discworld god whose list of ABOMINATIONS UNTO NUGGAN was so long and frequently-amended that his priests had the Discworld's only loose-leaf ring-bound holy book, for ease of updates. Kolkan and Nuggan are both suggestions of what might happen if gods feed on and are shaped by belief; get an authoritarian-enough set of followers, and a vicious spiral ensues that ends up with divine edicts against babies and the colour blue.

I confess I found it hard not to picture Sigrud as a cleaned-up version of Tormund from Game of Thrones with the approach to life of Amos from The Expanse. And talking of the latter, several of Bennett's characters reminded me to some extent of Avasarala - most obviously Mulaghesh, but Shara herself to a fair degree.
posted by Major Clanger at 9:20 AM on October 27, 2019

I really appreciated some of the beautiful little moments of psychology/philosophy sprinkled through the books. Was about to bemoan not highlighting them to share here but then realized goodreads at least partially has my back:

>“What a tremendous sin impatience is, he thinks. It blinds us to the moment before us, and it is only when that moment has passed that we look back and see it was full of treasures.”

No quotes. No single quote does justice to how the book as a whole is a meditation on war, death, meaning, hope. Some of the quotes on goodreads feel wrong to even quote because they ring so utterly different out of context.

"They value punishment because they think it means their actions are important - that they are important. You don't get punished for doing something unimportant, after all.” ---thought this one was rather thought-provoking and it tied into book two, as well. Actually in general there was a nice, satisfying arc between the three books, about covering up history, about people making their gods, about what people want, about healing from wounds.

I found it very interesting how Bennett made the evil gods sympathetic-- I pitied all of them-- but not so much the evil humans. The evil gods were essentially puppets of evil humans, or rather of humans twisting the divine to make meaning out of evil things (war, suffering) in order to feel more significant. To the extent the gods were sentient entities they were slaves, trying desperately to help their people at the cost of their own sanity and happiness. The evil humans were just... gross. Self-serving, nakedly ambitious, grotesquely self-justifying.

robert jackson bennett apparently has annotated city of stairs on goodreads
posted by Cozybee at 2:14 AM on October 29, 2019 [2 favorites]

Sorry for coming in a little late to the conversation, but I also really really loved this series. I particularly wanted to recommend the audiobook version, since the reader is superior. Her use of accents etc added tremendously to my enjoyment. (I have read and then listened to the first book and listened to the last two.)
posted by Illusory contour at 1:09 PM on November 13, 2019 [1 favorite]

I finished City of Miracles a few days ago. I loved it. I appreciate that she centers characters who are not the typical young protagonist - hooray for middle aged characters!
I also read Foundryside and enjoyed it very much, although I don’t think it’s as successful in its analysis of slavery as Cities is about colonialism.
posted by bq at 3:29 PM on November 13, 2019 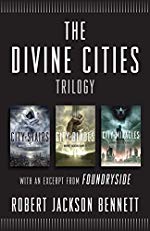