“Raise less corn and more hell!” Mary Elizabeth Lease exhorted her fellow Kansans in the late 19th century. Kansas was the epicenter of left-wing populist fervor. Kansans agitated against big banks and other businesses that took advantage of the working class farmer. Fast forward a hundred years, and Kansas is one of the most stridently right-wing states in the nation. Native Kansan Thomas Frank explores the changes that led the state's working class voters to redirect their anger. He also relates these changes to the new political landscape of the country as a whole.


The book was written after George W. Bush won the electoral college, yet it highlights some cultural and political movements that still operate the same way in the age of Trump.
posted by Monochrome (3 comments total) 4 users marked this as a favorite
Crossover alert! Thomas Frank points out Kansas Congressman Todd Tiahrt and Governor Sam Brownback are part of the Christian political group The Family, which Fanfare has also discussed.
posted by Monochrome at 9:23 AM on October 27, 2019

Love Thomas Frank and the Sequel "Listen, Liberal" is required reading for anyone wondering why the then current Dem Party can't seem to make a counter argument or gain ground. (It;s a good read with Hegemony A How To in calling out ineffective organizing tactics and theories of power)
posted by The Whelk at 9:06 PM on October 27, 2019 [1 favorite]

Some of my highlighted parts from the book:

Chapter 6, on how Republicans can win elections and still rage against powerful liberals:

Thanks to its chokehold on the nation's culture, liberalism is thus in power whether its politicians are elected or not; [...] Liberalism is beyond politics, a tyrant that dominates our lives in countless ways great and small, and which is virtually incapable of being overthrown.

Of course, to believe that liberalism is all-powerful gets conservative lawmakers off the hook for their flagrant failure to make headway in the culture wars, but it also makes for a singularly negative and depressing movement culture.
[...]This is a curious set of beliefs for a coalition that quite literally rules American politics. And it only gets worse. Not only do conservatives often lament that their side never wins; according to backlash mythology, even if by some luck they manage to prevail on some question, their victory will quickly be nullified by shadowy liberal machinations.13

Chapter 10, on how Republicans can be powerful but also persecuted

What they mean by persecution is not imprisonment or excommunication or disfranchisement, but criticism, news reports that disagree with them

Epilogue, where the author's blue-collar hometown has become a place "where hatred trumps bread"

It was a “worker's paradise,” my dad remembers now, a place where the ranch homes and split levels housed the families of appliance salesmen, auto mechanics, and junior engineers at the giant Bendix plant just across the state line: upbeat people, guys with GI Bill educations and color TVs in massive fake-mahogany cabinets. The world had not gone sour for them yet; had you told them then that they would one day be devoted to something like Fox News, a network that offers its viewers nothing but torture—endless images of a depraved world that, it tells them, they are powerless to correct—they would have questioned your sanity.

The eastern part of Shawnee is still a blue-collar suburb, but after three decades of deunionization and stagnant wage growth, blue-collar suburbs like this one look and act very differently than before. Shawnee today burns hotter than nearly any place in the state to defund public education, to stamp out stem-cell research, to roll back taxes, and to abase itself before the throne of big business.

Epilogue, how Democrats gained victories for the working class but New Democrats abandoned the idea that big business was worth criticizing

Sociologists often warn against letting the nation's distribution of wealth become too polarized, as it clearly has in the last few decades. Societies that turn their backs on equality, the professors insist, inevitably meet with a terrible comeuppance. But those sociologists were thinking of an old world in which class anger was a phenomenon of the left. They weren't reckoning with Kansas, with the world we are becoming.

Liberalism isn't a force of karmic nature that pushes back when the corporate world goes too far; it is a man-made contrivance as subject to setbacks and defeats as any other. Consider our own social welfare apparatus, the system of taxes, regulations, and social insurance that is under sustained attack. Social Security, the FDA, and all the rest of it didn't spring out of the ground fully formed in response to the obvious excesses of a laissez-faire system; they were the result of decades of movement building, of bloody fights between strikers and state militias, of agitating, educating, and thankless organizing.

Democratic political strategy simply assumes that people know where their economic interest lies and that they will act on it by instinct. There is no need for any business-bumming class-war rhetoric on the part of candidates or party spokesmen, and there is certainly no need for a liberal to actually get his hands dirty fraternizing with the disgruntled.

And for a bit of fun, Chapter 6, mining conservative websites for descriptions of the hellish America liberals want

The liberal elite is going to outlaw major league sports. Forbid red meat. Mandate special holidays for transgendered war veterans. Hand our neighborhood over to an Indian tribe. Decree that only gay couples can adopt children. Ban the Bible. 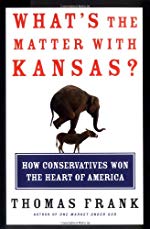