Four college girls hold up a restaurant in order to fund their spring break vacation. While partying, drinking, and taking drugs, they are arrested, only to be bailed out by a drug and arms dealer.


Slate: There seem to be two critical perspectives on Spring Breakers. Is the veteran provocateur Harmony Korine’s most mainstream movie yet—the story of four college girls who go a little too wild on a party trip to Florida—a dead-on formalist send-up of our of culture’s sick obsession with guns, drugs, and the sexual exploitation of young women? Or is it a stultifyingly dull piece of exploitative garbage?

The New Yorker: The spring-break setting is only a backdrop for a crime drama of shooting sprees and body counts—yet, in a way, that’s the point. “Spring Breakers” isn’t about spring break but about the reductio ad absurdum of spring break—a sort of week-long murder camp at the end of which, having snuffed out a sufficient number of lives (and if not snuffed out oneself), a student returns to college refreshed, reënergized, and reëducated or, rather (here’s Korine’s satirical point), finally educated in real competition and rendered all the readier for a career in business. Ultimately, the movie is a manual of competitive ruthlessness that offers the repeated banal definition of the drug dealer’s life as “the American dream.” (A definition given by the gangster himself, Alien—his real name, he says, is Al.) The movie suggests that its spring breakers—especially its two most audacious—are getting, guns ablaze, the education of their life, and that college itself is, rather, the permanent vacation where privileged young people stay clear of the raw realities of America.

Richard Roeper: "Spring Breakers" challenges us to think about the hedonistic hell that of that annual ritual, as it segues from party film to insane crime story. It's self-indulgent, it's funny, it's dark, and it's always provocative.

AV Club: Resembling a cross between Kevin Federline and Willem Dafoe’s sinister cretin in Wild At Heart, Franco masters the weird semi-improvisational babble that constitutes dialogue in a Harmony Korine film, projecting colorful idiocy and seductive menace in equal measure. (Cinema historians will want to file his “Look at my shit” monologue in the pantheon alongside Henry Fonda’s “I’ll be there” speech in The Grapes Of Wrath.) The sensual overload of Korine’s Day-Glo images of bodies in motion, underlined by the sonic assault of Skrillex’s score, makes Spring Breakers seem transcendent in five-minute bursts. But the overall effect is enervating, like a party that grinds on after most of the attendees have either left or passed out. And much like Kids, the enfant terrible’s breakthrough screenplay, Korine’s film has an unintended moral hysteria, like a warning to parents of what their good girls are doing when they aren’t looking. The message: Keep them locked up. In their bikinis, if necessary.

NPR: Franco turns his performance into one massive look-at-me stunt, and admittedly, it's hard to take your eyes off him: Those shiny metallic teeth are mesmerizing — they're reminiscent of an older, cozier symbol of American success, the grill of a Cadillac. Alien likes his money, and he loves what it can buy. (He delivers a hilarious monologue detailing his favorite things, which decidedly do not include raindrops on roses and whiskers on kittens.)

WaPo: And good luck distinguishing any one of the four female leads from any other. Aside from Selena Gomez, who plays a semi-devout Christian named Faith, there is no discernible difference between the characters portrayed by Vanessa Hudgens, Ashley Benson or Rachel Korine (the director’s wife). Korine’s treatment of women as interchangeable sex objects suitable only for leering at, or snorting cocaine off of, is honestly less offensive than his unwillingness — or, more likely, his inability — to give them roles that even remotely resemble human beings.

NYTimes: At once blunt and oblique, “Spring Breakers” looks different depending on how you hold it up to the light. From one angle it comes across as a savage social commentary that skitters from one idea to another — white faces, black masks, celebrity, the American dream, the limits of self-interest, the search for an authentic self — without stitching those ideas together. From another it comes off as the apotheosis of the excesses it so spectacularly displays. That Mr. Korine appears to be having it both (or many) ways may seem like a cop-out, but only if you believe that the role of the artist is to be a didact or a scold. Mr. Korine, on the other hand, embraces the role of court jester, the fool whose transgressive laughter carries corrosive truth. He laughs, you howl.

Inside ‘Spring Breakers,’ the Most Debauched Movie of the Year

A look back at Harmony Korine's teen dream magnum opus.

In Defense of Spring Breakers
posted by MoonOrb (6 comments total) 2 users marked this as a favorite
I wonder if this is where Jared Leto's metal teeth in Suicide Squad came from. I always meant to watch this, but Harmony Korine seems like a really repulsive person to me.
posted by kittens for breakfast at 5:50 AM on October 29, 2019 [1 favorite]

I do appreciate that they turned Gatsby's showing off of his room of possessions to Daisy into Franco standing on a bed screaming LOOK AT MY SHIT while pointing to nunchucks.
posted by maxsparber at 9:41 AM on October 29, 2019 [4 favorites]

I wonder if this is where Jared Leto's metal teeth in Suicide Squad came from.

Soooo...Is this a movie I actually should check-out, or will I end up feeling very old-dude-creeper after watching girls in bikinis for 2 hours?
posted by Thorzdad at 12:53 PM on October 29, 2019

Soooo...Is this a movie I actually should check-out, or will I end up feeling very old-dude-creeper after watching girls in bikinis for 2 hours?

I would say the answer to that is yes to both. I think it is a great movie, and part of what makes it good is the deliberate discomfort of some of the scenes, which are filmed to make the viewer feel creeper-ish.
posted by Dip Flash at 7:26 PM on October 29, 2019 [5 favorites]

Like Korine’s other movies, it’s creepy, it’s over the top, and it satirizes both the subjects it portrays and other cultural artifacts about that culture. Parts of it are quite funny, but only if you are in the right mood to take none of it seriously.
posted by mai at 5:25 AM on October 30, 2019 [1 favorite] 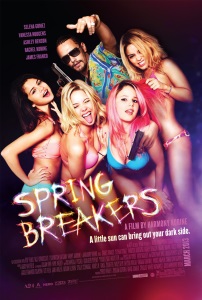