I liked this review. It's full of spoilers, so don't read it if you care about such things.
posted by The corpse in the library at 8:39 AM on October 31, 2019

The only good thing I can say is that upon re-reading His Dark Materials after this it was fun to see Dame Rolf and Alice show up again.

Otherwise, I think the rose plot is stupid, the mysterious war-torn middle east is racist, and the subplot about Malcolm and Lyra being in love is awful.

This book made me angry. The sexual assault subplot made me furious. I'm feeling much less excited about the upcoming tv show.
posted by ChuraChura at 9:20 AM on October 31, 2019 [4 favorites]

It felt like at a certain point Pullman decided he needed to make it clear he understood what it’s like to be a woman, so he had her be sexually assaulted and then talked about menstruation. There: female character!
posted by The corpse in the library at 10:01 AM on October 31, 2019 [2 favorites]

It was so disappointing because I saw myself so clearly in Lyra in the first few books, and I'm just really angry that Lyra doesn't get to go on adventures and live an amazing life without also being sexually assaulted.
posted by ChuraChura at 10:05 AM on October 31, 2019 [4 favorites]

Belle Sauvage really beat you over the head with LYRA IS THE AMAZING PERFECT CHOSEN ONE YES EVEN AS A BABY and it got old real fast. It's like he never understood what was great about her in the first series was never about perfection but stubborn passion and love. Sounds like this book is even further off the track. Maybe a grown woman is just too hard for him to write. I always thought his approach to Mrs. Coulter in the last book was weird but she wasn't as Central so you could ignore it.
posted by emjaybee at 8:03 PM on October 31, 2019 [3 favorites]

I really liked the first book in this new trilogy, but this thread has made me in-reserve the new one at the library. Too many other books to read.
posted by skycrashesdown at 6:37 PM on November 2, 2019

I too was disappointed in this. The attempt at romance in this is a drag. There is little of the wild magic of La Belle Sauvage. But the last fifty pages were my favorite part; the boring long didactic "two characters argue about a book in a way that's meant to be Philosophically Important To The Theme" sections seemed to have been, for the better, forgotten. So I guess I will read the next one!
posted by escabeche at 6:07 PM on November 10, 2019 [1 favorite]

On first read...it's not Lyra's imagination that has failed: it's Pullman's. For all of his amazing world-building in the first series, Pullman seems unsure here, confused by--of all things--a woman, and what she might actually be like (despite his sustained effort at erasing her, by lopping her in half, removing her fighting spirit, putting her under the spell of male authors, cutting her hair, hiding her face and body, putting her through a gratuitous and awful sexual assault, before finally putting her in the sights of an assassin. It's the inverse of character development as she just becomes less and less, especially internally. She's not there, and the Magesteruim's own secret commonwealth does not cut it as a replacement. The political and humanitarian outrage seems undigested--like Pullman simply brute-forced contemporary issues of this world into another, in a way that invites identifying parallels rather than being smitten by strangeness. It struck me as having a Victorian colonialist tone; the foreign is to be pillaged and marched through, and its people--or at least its men--could have been drawn from a late-1800s British political cartoon about Johnny Foreigner. Even the helpers have become flat! Ma Costa's appearance is wasted on eels. The boat captain is mainly known for his revolving cast of girlfriends. Malcolm is better not talked about in this regard; yuck. I didn't find anyone in this book at all memorable (though the assassination of the Patriarch was OK, setting aside the gross depiction of his affection for good-looking boys. I did like the idea of one of the assistants having the wit to be found in prayer amid the blood, one eye to the corpse and the other toward history). Murder on a public stage? At least that scene was done with attention; the murders at the public meeting of the farmers, not so much (Malcolm is not Bond, no matter how coolly he sips his post-kill cocktail. It's not deconstruction if you're just reproducing what went before!).

I will say that the story of the flaming Dutchman was fascinating, and weird enough to be out of step with the rest of the book. I had the strong impression that Pullmam had done a re-read of Foucault's Pendulum and been compelled to invent his own bizarre den of alchemy. I wouldn't be sorry to see the background of this tale teased out on a novella--but again, it felt like a piece of something else inserted into this book, something much stranger and more interesting than the rest.

I'm in this series, still, for Lyra, and for Pan, but this book was a bit of a slog. I hope for better things in the next volume.

It did, however, inspire me to track down its eponymous inspiration, The Secret Commonwealth of Elves, Fauns and Fairies by Robert Kirk and Andrew Lang, whch is on archive.org.
posted by MonkeyToes at 6:01 PM on December 16, 2019 [3 favorites] 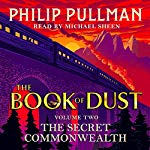