It ain't easy bein' green -- especially if you're a likable (albeit smelly) ogre named Shrek. On a mission to retrieve a gorgeous princess from the clutches of a fire-breathing dragon, Shrek teams up with an unlikely compatriot -- a wisecracking donkey.

Much will be written about the movie's technical expertise, and indeed every summer seems to bring another breakthrough on the animation front. After the three-dimensional modeling and shading of "Toy Story," the even more evolved "Toy Story 2," "A Bug's Life" and "Antz," and the amazing effects in "Dinosaur," "Shrek" unveils creatures who have been designed from the inside out, so that their skin, muscles and fat move upon their bones instead of seeming like a single unit. They aren't "realistic," but they're curiously real. The artistry of the locations and setting is equally skilled--not lifelike, but beyond lifelike, in a merry, stylized way.

Still, all the craft in the world would not have made "Shrek" work if the story hadn't been fun and the ogre so lovable. Shrek is not handsome but he isn't as ugly as he thinks; he's a guy we want as our friend, and he doesn't frighten us but stir our sympathy. He's so immensely likable that I suspect he may emerge as an enduring character, populating sequels and spinoffs. One movie cannot contain him.

It is, perhaps, a mistake that this movie, which insists that people (and ogres) should not be judged on outward appearances, makes fun of Lord Farquaad for being short. But other than that, this movie's heart is in the right place.

Which is not to say that its heart is on its sleeve. The satirical Shrek, after all, is anything but sentimental.

You've got to love a fairy tale in which the singing voice of the princess is so horrendous that it causes a sweet little bluebird to explode.

Now that's real deconstruction for you.

The first obstacle, strange to report, is the inordinate level of skill. Merely reading the publicity notes was like going back to school for a physics lesson, with talk of isosurfaces and volumetric rendering. Three billion leaves were grown in a digital greenhouse, we are told, and the donkey fur could be made to "lie flat, overlap, and even swirl," like Sylvester Stallone's chest muscles in his "Rocky" days. Onscreen, the result is at once brilliant and underwhelming; since when was verisimilitude the Holy Grail of animation? Call me an uncritical consumer of capitalist fantasy, but I don't recall firing off indignant letters to Warner Bros. to complain about Wile E. Coyote and his insufficiently detailed snout.

[...] What the film lacks is the faintest glimmer of charm; the need for fairy tales may be childish, but that is why it is both primitive and permanent, and, however much we rail at Disney for taking our offspring hostage and milking their emotions dry, there is something cynical, perhaps saddening, in DreamWorks' insistence that children are now too hip to fall for that old game. If the team behind "Shrek" moves on to a film that questions the existence of Santa Claus, I may sue.

Actors are the eight-track tapes of the New Hollywood; they had a good run, but the industry no longer seems to need a pulse. With Shrek and the oncoming Final Fantasy, George Lucas’s technocratic scheme to outmode human performers sees its first volleys fired. Will audiences buy this weirdness? Shrek is not in essence a cartoon—it’s an Umberto Eco-style hypercinema, stuck between being drawn and being photographed as Disney’s Celebration U.S.A. is stuck between life and entertainment. Spectacle this is—like a Grucci blastoff, impressive for having been manufactured—but Shrek is at the same time witheringly cynical. Desperately avoiding the risk of even a half-second of boredom, the movie is wall-to-window-to-door noise, babbling, and jokes (the first minute sees the first fart gag), and demographically it’s a hard-sell shotgun spray.

Magic mirror
Welcome to Duloc
Ogres are like onions
Fiona's song
posted by J.K. Seazer (14 comments total) 1 user marked this as a favorite
Congrats- your tags have broken me. Good job!
posted by Homo neanderthalensis at 1:48 AM on November 5, 2019 [7 favorites]

Shrek is one of those things where I really can't judge the quality of it at all, especially after all this time. Is it good? Is it bad? Is it a classic? Is it an outdated stiched-together collection of pop culture references?

I don't know. I just don't know. And yet, I'll keep watching it, every couple of years, and somehow enjoy it.

You've got to love a fairy tale in which the singing voice of the princess is so horrendous that it causes a sweet little bluebird to explode.

Is Fiona's terrible singing voice a joke about Cameron Diaz doing karaoke in My Best Friend's Wedding?
posted by CheeseLouise at 2:13 PM on November 5, 2019

Shrek is one of those things where I really can't judge the quality of it at all, especially after all this time. Is it good? Is it bad? Is it a classic? Is it an outdated stiched-together collection of pop culture references?

Yeah, it's definitely a product of its time, for better or worse. It strikes me as a very conscious challenge to multiple different trends in film, 2D animated Disney musicals being the most obvious one, but also, just in general, the kind of earnestness and sappiness that could produce films like Forrest Gump. I loved it as a kid for being snarky and self-aware just when I was becoming snarky and self-aware myself. People tend to say that the trend of darker and edgier films that took over Hollywood in the 2000's was a result of 9/11, and maybe that's true, but Shrek came out just before then and was very successful, so there was clearly already an appetite for it.
posted by J.K. Seazer at 2:20 PM on November 5, 2019 [1 favorite]

This is why Anthony Lane never gets invited to any of the cool parties.
posted by Naberius at 8:27 PM on November 5, 2019 [3 favorites]

I'll confess that the main reason I included Atkinson's review in the Village Voice was because his insufferable pretentiousness reminds me of no one so much as Emmett Rensin, the disgraced thinkpiecer who at one time mused on "the smug style of American liberalism" and "the blathering superego at the end of history" while holding down a side gig of sexual assault and harassment, and who my friends in college would always refer to as "Twitterature Kid" in honor of the incredibly uninspired book he co-wrote and paraded around in his second year at UChicago.
posted by J.K. Seazer at 8:50 PM on November 5, 2019

No, it's a fair cop. The VV of course had some great writers, but it also hosted some critics who never really moved on from the worst tendencies of college newspaper writing. And the New Yorker's Lane embodies the curdled remnant of that style, so grimly determined to stand athwart the march of pop culture hegemony that you can visualize his jaw muscles popping out without having an idea of what he looks like; "we rail at Disney for taking our offspring hostage and milking their emotions dry", indeed.
posted by Halloween Jack at 4:49 AM on November 6, 2019

Atkinson’s idea that actors are no longer needed is hella stupid. Shrek was originally offered to Nicholas Cage, then Chris Farley - who completed a bunch before passing away. Janeane Garofalo was reading for Fiona opposite him. Can you imagine how different a Farley / Garofalo Shrek would have been?
posted by jenkinsEar at 11:44 AM on November 6, 2019 [3 favorites]

I have always thought of Shrek as an innately Scottish character: in Scotland we have a damp climate that is conducive to swamp dwellers. Sometimes it can take a while to get to know us and we might not seem super friendly at first. We have plenty of Fionas ('fair' in Gaelic). And we like songs like "I'm on my way" and "500 Miles" by the Proclaimers - brought to global fame by the film.

So, it is interesting to remember that Shrek was originally written for Chris Farley. In that first incarnation, he was an outgoing teenage ogre who just wanted to join the family business. (some footage of Farley's voicing of Shrek). Farley, alas, died mid-way through production in 1997. It was Mike Myers who insisted the character was re-written and re-voiced (his grandmother was a Scot who had read him fairly tales). That meant Fiona was re-cast from Janeane Garafalo to the perkier Cameron Diaz. The film as released is effectively a "version 2" built at great expense on the ashes of a chaotically produced version 1. See How "Shrek" went from being a train wreck to one for the record books.
posted by rongorongo at 10:55 PM on November 6, 2019 [2 favorites]

My greatest movie-watching experience was watching Shrek for the first time at the University of Wisconsin-Madison student theater with my sweetheart visiting from NY and a full house of slightly buzzed undergrads. It was exactly the right crowd to watch it with, happy people young enough to laugh like kids at an implied butt rhyme and old enough to get all the references and maybe be ready for a relationship with layers. It’s a movie I cannot be impartial about.
posted by tchemgrrl at 6:41 PM on November 7, 2019 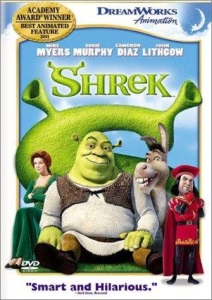