You are a failed novelist about to turn fifty. A wedding invitation arrives in the mail: your boyfriend of the past nine years is engaged to someone else. You can't say yes--it would be too awkward--and you can't say no--it would look like defeat. On your desk are a series of invitations to half-baked literary events around the world. QUESTION: How do you arrange to skip town? ANSWER: You accept them all.


What a ramshackle itinerary he has nailed together!

First: this interview with H. H. H. Mandern. This gets him plane fare to New York City… And there is at least one free dinner (the writer's delight): with his agent, who surely has word from his publisher.

Second: a conference in Mexico City. It is the kind of event that for years, Less has refused: a symposium on Robert's work.

Third: Turin. Less is dubious. He is supposedly up for a prestigioso award for a book recently translated into Italian.

Fourth: the Wintersitzung at the Liberated University of Berlin - a five-week course "on a subject of Mr. Less's choosing." The letter is in German; the university is under the impression Arthur Less is fluent in German, and Arthur Less's publisher, who recommended him, is also under this impression. So is Arthur Less.

Fifth: a sojourn accross Morocco, his single indulgence on the itinerary. He would be tacking onto another birthday celebration, for someone he has never met named Zohra, who has planned an expediting from Marrakech into the Sahara and from thence northward to Fez. His friend Lewis insisted; they were looking to fill one spot on the trip- how perfect!… [I]t was somewhere in the Sahara that Less would turn fifty.

Sixth: to India… he could polish the final draft of his novel, the one whose acceptance his agent will surely be celebrating in New York with that champagne.

And, finally: to Japan… A piece for an in-flight magazine about traditional Kaiseki cuisine. He hoped he would not be too early for the cherry blossoms.

Arthur Less, encircling the globe! It feels cosmonautical in nature… And during this odyssey, he was certain he would not think about Freddy Pelu at all.
posted by Going To Maine (5 comments total) 1 user marked this as a favorite
Finally read this after looking at it peek off of bestseller racks for years now. Utterly delicious, the kind of light read that sits in your stomach because it isn't actually. Well hopefully get around to a reread soon.
posted by Going To Maine at 12:52 AM on December 3, 2019

I read this for the first meeting of my neighborhood book club! I thought it was funny and kind of joyful. Sadly, the others in my group all hated it and most of them didn't finish it... I'm not sure this book club is right for me.
posted by beandip at 9:28 AM on December 3, 2019

I am still trying to unpack how much of the character of Less is Less and how much is Freddy.
posted by Going To Maine at 9:44 AM on December 3, 2019

I liked it, but didn't see how it's Pulitzer-worthy -- to the point that I wondered if the "winner of the Pulitzer Prize" tag was a meta joke and looked it up to see if it was real.
posted by The corpse in the library at 12:34 PM on December 3, 2019 [1 favorite]

I found this book utterly charming and delightful. I was surprised at the Pulitzer Prize, but I did enjoy it a lot. The chapter in Germany had me laughing out loud.
posted by hurdy gurdy girl at 12:46 AM on December 5, 2019 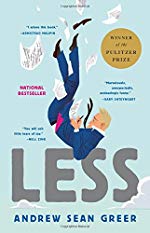