n his New York Times bestseller, Lucy: The Beginnings of Humankind, renowned paleoanthropologist Donald Johanson told the incredible story of his discovery of a partial female skeleton that revolutionized the study of human origins. Lucy literally changed our understanding of our world and who we come from. Since that dramatic find in 1974, there has been heated debate and–most important–more groundbreaking discoveries that have further transformed our understanding of when and how humans evolved. In Lucy’s Legacy, Johanson takes readers on a fascinating tour of the last three decades of study–the most exciting period of paleoanthropologic investigation thus far. In that time, Johanson and his colleagues have uncovered a total of 363 specimens of Australopithecus afarensis (Lucy’s species, a transitional creature between apes and humans), spanning 400,000 years. As a result, we now have a unique fossil record of one branch of our family tree–that family being humanity–a tree that is believed to date back a staggering 7 million years.


Focusing on dramatic new fossil finds and breakthrough advances in DNA research, Johanson provides the latest answers that post-Lucy paleoanthropologists are finding to questions such as: How did Homo sapiens evolve? When and where did our species originate? What separates hominids from the apes? What was the nature of Neandertal and modern human encounters? What mysteries about human evolution remain to be solved?

Donald Johanson is a passionate guide on an extraordinary journey from the ancient landscape of Hadar, Ethiopia–where Lucy was unearthed and where many other exciting fossil discoveries have since been made–to a seaside cave in South Africa that once sheltered early members of our own species, and many other significant sites. Thirty-five years after Lucy, Johanson continues to enthusiastically probe the origins of our species and what it means to be human.
posted by Homo neanderthalensis (1 comment total) 4 users marked this as a favorite
So first of all- I got this book as part of my quonsar gift from the fantastic box, so kudos!
ANYWAYS. This is a wonderful follow-up to Donald Johanson's earlier books about his most famous find- the Australopithecus afarensis fossil colloquially named 'Lucy'. Not only does it re-touch on the find, it lays a ton of context about Ethiopia and 70's anthropology and past and recent to the book controversy's. Then, in it's second part the book looks backwards to Lucy's ancestors, and then in the third part it looks forwards to us and our late cousins. As far as my people are concerned he gets it dead wrong, because this book was written in 2008 and he confidently states that there is absolutely no way Neanderthals and Sapiens interbred. WOMP WOMP. But you know, he does lay out the facts at hand at the time and he's a good enough scientist to be open minded, and despite that whoopsie he does go into how the common misconception of neanderthal as caveman brute was way off... so I suppose I'll give him a pass. The asides about Ethiopia are fascinating and honestly very good on the level that he gives a ton of credit to Ethiopian scientists and the local people of the Afar who helped him dig and to his fellow anthropologist from all over the world. Unfortunately in paleoanth as in other western science traditions there can be... not that. SO it's refreshing to see that sort of openness and non-parochialism especially in a scientist of his generation. (and don't get me wrong he is known to be a bit of a gadfly in our community I'm sure there are sides of him that are not so great I do know a few things from my paleoanth classes but that is the hot goss and not for public consumption XD) For the serious anthropologist this book maybe doesn't go into the sort of paper level detail that you'd want but it is a great and informative read and the sort of all ages introduction to the latest (as of 2008) that we knew about human evolution starting with the find of the last century.
posted by Homo neanderthalensis at 9:45 PM on December 14, 2019 [3 favorites] 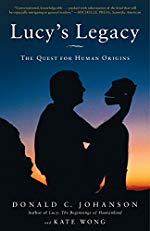