In this captivating science fiction novel from an award-winning author, public gatherings are illegal making concerts impossible, except for those willing to break the law for the love of music, and for one chance at human connection. In the Before, when the government didn't prohibit large public gatherings, Luce Cannon was on top of the world. One of her songs had just taken off and she was on her way to becoming a star. Now, in the After, terror attacks and deadly viruses have resulted in the government outlawing public gatherings of more than 30 people, and an economy pretty much owned by an online superstore.


I don't like the science fiction label for this book. The technology in the book all exists today, it's just not widely implemented or distributed. The social-political environment could happen at any day. I'd call this a dystopian coming of age story in which the power of a real community, the power of a well written song, and the power of a heartfelt live performance counteracts the official government line that personal contact and public gatherings are dangerous.
posted by COD (4 comments total) 1 user marked this as a favorite
This has been on my too read list since it came out (I preordered it because I liked her short stories so much, but haven't had a chance to read it yet).

Arguments about what is and isn't science fiction are pretty tedious to me, but 'it can happen here'/political science fiction is defintely a subgenre of science fiction (think: The Handmaid's Tale)
posted by dinty_moore at 6:53 AM on February 6, 2020

I'm reading this now. About halfway through, but wanted to go ahead and post.

Like, it kind of comforting that their phobias aren't respiratory, but surface-based. Otherwise, it might be a bit too inadvertently documentary.

On the other hand, there's a passage that's "often highlighted" per Amazon that I'd bet wasn't before March, and things like the list of How Things Were on the walls that ring real close to home and make me want to write an email to my year old son to read in the future...in the hopes that he won't grow up without all these things that I want him to be able to experience.
posted by DebetEsse at 9:11 PM on September 6, 2020

Ok, have now finished it.

I think...I think this was exactly the WRONG moment for this book for me, especially the ending. Because the fears in the story are ultimately unreasonable, given the costs/benefits, is pretty clearly the position of the text. And that's a thing that is just not true at this moment, so the resonance was extra dissonant.
posted by DebetEsse at 3:36 PM on September 12, 2020 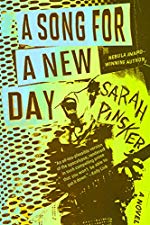