Way out in space there are 12 planets populated by 12 tribes of humanity, which all came out from their mother world of Kobol. Then the eeevil Cylons, a race of shiny chrome robots and not sexy sexy ladies, attacked. After a thousand year war it looked like peace was finally coming... but it was a trap, engineered by traitorous human Baltar! Boo! Hiss! Now, Admiral Cartwright Adama commands the last Battlestar, Galactica, as it leads a rag-tag fugitive fleet on a lonely quest... for a shining planet known as Hoboken Earth. It's MST Club approved!


Watching this movie, a collection of TV episodes that in the wake of Star Wars actually managed to finagle itself a theatrical release, was hilarious. Memories of the more recent series, its amazing collection of tropes, and the large number of subplots hosted by the Galactica despite its apparently-desperate mission, all multiply the number of joke opportunities available. Here's a few some of us in MST Club came up with:
posted by JHarris (25 comments total) 1 user marked this as a favorite
Casino planet with SPACE HOOKERS. Sorry, "Socialators."

Thanks for the shouts JHarris!

The ship battles look pretty good for the time in the first episode in particular, I wonder if the release as a movie was part of their plan all along?

Another thing I observed during our viewing, the intense, lens-flaring shininess of the Cylons is tres disco. I really like the buttons on the pilot jackets.

I'm not sure why Apollo and Starbuck are different characters.
posted by StarkRoads at 8:49 AM on February 8, 2020 [1 favorite]

I'd actually like to see this sometime; I'm sure I saw all the individual episodes back in the day, but don't really remember them. One thing that I want to mention is that, in addition to Count Baltar, John Colicos was the Klingon captain Kor in Star Trek (both TOS and DS9); since he was the first named Klingon in the franchise, in "Errand of Mercy" (their first appearance), he can lay claim to having helped invent the Klingons. All I remember of him from Battlestar Galactica is his arguing with some alpha Cylon who had a sort of chrome throne.
posted by Halloween Jack at 3:29 PM on February 8, 2020 [4 favorites]

Y'all should be ashamed that none of you, not a single one, have yet mentioned the heroic death of Rick Springfield.
posted by GCU Sweet and Full of Grace at 4:20 PM on February 8, 2020 [5 favorites]

Awww, I missed it. But I passed my final!

I really like the buttons on the pilot jackets.

Oh, I so wanted one of those jackets... there were ads for them in the back of Starlog, but at 14 there was no way I could afford one. Years later I ran across one at a yard sale, but even then I was too poor to buy it. But yeah, those buttons were awesome.
posted by valkane at 5:01 PM on February 8, 2020 [2 favorites]

Watching this movie, a collection of TV episodes that in the wake of Star Wars actually managed to finagle itself a theatrical release, was hilarious.

This played in Toronto before the TV series came out – I believe it was some sort of market testing. I didn't see it, but a friend did and described it in broad strokes. One item of note: near the end of the movie, the Cylons execute Baltar. That obviously was changed for the TV series so they could have a recurring villain.
posted by rochrobbb at 5:33 PM on February 8, 2020 [2 favorites]

I can never hear rag-tag without immediately appending in my mind "fugitive fleet."
posted by Chrysostom at 9:41 PM on February 8, 2020 [12 favorites]

One of the useful things about having been a preteen sf-crazed Gen-X type is that for better or worse, all things Galactica are embedded more deeply in my brain than my parents’ phone numbers. Thus, when the new series* came along, it was pretty easy to appreciate it while overlaying the aesthetic, casting, and design choices of the old series onto it. John Colicos hallucinating advice from a chromed centurion, Richard Hatch and Dirk Benedict seen lounging post-coitally after the simmering sexual tension between Apollo and Starbuck is finally resolved, the space battle sequences featuring the same four three-second-long snippets of special effects over and over...

*I say “new series” in the full knowledge that it is coming up on twenty years since the miniseries aired, and that the miniseries itself was not a whole lot more than twenty years after the sputtering end of Galactica 1980 (which was, I suppose, the Caprica of the original series). I grow old, I grow old.
posted by ricochet biscuit at 8:42 AM on February 9, 2020 [4 favorites]

Cylons are All-Time Top 5 antagonists. The look, the sound, the attitude...they got it all!

The cameo on Boney M’s “Nightflight to Venus...”

But yes, the sound was a huge part of it. Note to Apple: I have an iPhone which I tolerate. I suspect a lot of middle-aged users would use Siri a lot more if there were an “Old-School Cylon” option for the voice. Imagine a Cylon telling you, “Okay, here’s what I have found for ‘Italian restaurants near me...’”.
posted by ricochet biscuit at 12:08 PM on February 9, 2020 [4 favorites]

Imagine a Cylon telling you, “Okay, here’s what I have found for ‘Italian restaurants near me...’”.

OT, but TomTom GPS nav devices have installable voices, but sadly they've never allowed users to create their own.
posted by rhizome at 1:06 PM on February 9, 2020 [1 favorite]

This was the first movie that I can remember seeing in a movie theatre. I would have been around seven or eight years old. Forty plus years later, I remember more about the movie theatre then I do the actual movie.
posted by hoodrich at 1:13 PM on February 9, 2020 [3 favorites]

I haven't watched this in 10+ years, but I gotta tell you - when I was a kid, Cylons were the coolest thing ever. I was so disappointed with the decision to make Cylons humans in the reboot, and that we got so little of the actual robot Cylons. The voice effect for the Cylons was also thrilling for me as a youngster still hopped up on Star Wars with years to wait before a second movie.

You'd occasionally see Sci-Fi fan magazines at the local drug store or convenience store, which would have the equivalent of maybe one day's worth of rumors you see on The Mary Sue or other fan sites now. I lived for any glimpse of new ships, costumes, creatures, etc.

And yes, they'd have ads for all this wonderful stuff in the back of the magazine that an 8-year-old could never hope to afford or convince their parents to mail order. It was all very magical in my imagination.

And so we come to Baltar, traitor to all human kind, both diabolical Machiavellian and trusting fool.

I think that was more of an archetype then than now - the traitor who was also capable of working both sides to help the heroes out when things looked the worst, because they realize their evil overlords are going to do them too when they're no longer useful. Anyway, Baltar seemed ... more logical when I was eight.
posted by jzb at 7:16 AM on February 10, 2020 [2 favorites]

The best thing about the mixed bag that was the original BSG was tht heroic theme music. One of my favorite TV themes, actually.
posted by DrAstroZoom at 9:26 AM on February 10, 2020 [6 favorites]

It's Boxey with an e. And yes, the theatrical movie was always planned to be released theatrically before moving to TV. It was followed by two TV movies before going to series. The uneven writing of the 1-hour episodes was due to the fact that the weekly series was picked up a year before they anticipated, so they had no finished scripts in the bank and had to rush them out.

I'm still a bigger fan of the original than of the "reimagining."
posted by The Underpants Monster at 3:15 PM on February 10, 2020 [3 favorites]

I remember toys that fired real projectiles that were small enough to choke on, before they were redesigned to be safer.
posted by ZeusHumms at 9:39 AM on February 11, 2020 [2 favorites]

Note to Apple: I have an iPhone which I tolerate. I suspect a lot of middle-aged users would use Siri a lot more if there were an “Old-School Cylon” option for the voice. Imagine a Cylon telling you, “Okay, here’s what I have found for ‘Italian restaurants near me...’”.

My favorite jokes I made during the show that no one else got were, when Cylons were on screen, going, "HUMANOID DETECTED DESTROY THE INTRUDER" and "COIN DETECTED IN POCKET." Would it have been easier to get if I used "CHICKEN FIGHT LIKE A ROBOT"?
posted by JHarris at 9:46 PM on February 11, 2020 [2 favorites]

This was the first movie that I can remember seeing in a movie theatre.

Me too. I have a very crystalline memory of our small town "theatre" well - folding chairs for about 30 people, my dad smoking, my sister's native friend working the tiny concession which also sold cigarettes. I recall liking it more than Star Wars. John Colicos was a Canadian actor and remember him well in so many Canadian productions as a kid.
posted by Ashwagandha at 12:44 PM on February 13, 2020 [1 favorite]

The best thing about the mixed bag that was the original BSG was tht heroic theme music.

They also reused the original series theme in the reboot miniseries, when we first see the museum that the Galactica's flight deck has become.
posted by hanov3r at 1:32 PM on February 14, 2020

@ Ashwagandha: Ah, another Canadian. I saw it at the Gaiety theatre in Grande Prairie, AB.
posted by hoodrich at 3:24 PM on February 16, 2020 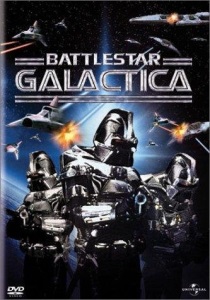