Forty years after the God Wars, Dresediel Lex bears the scars of liberation—especially in the Skittersill, a poor district still bound by the fallen gods' decaying edicts. As long as the gods' wards last, they strangle development; when they fail, demons will be loosed upon the city. The King in Red hires Elayne Kevarian of the Craft firm Kelethres, Albrecht, and Ao to fix the wards, but the Skittersill's people have their own ideas. A protest rises against Elayne's work, led by Temoc, a warrior-priest turned community organizer who wants to build a peaceful future for his city, his wife, and his young son.


(OK, this is the first book chronologically but the fourth book published. For more information, see This is How I Numbered My Books and I’m Sorry
posted by fifteen schnitzengruben is my limit (6 comments total) 2 users marked this as a favorite
I tend to think of this book as, "What if the Darth Vader origin story prequels had been done correctly and skillfully?"
posted by kyrademon at 12:37 AM on February 11, 2020

So I read "Three Parts Dead" and really liked it. Now it seems it would not be amiss if I read this one next. Do you guys agree?

And kyrademon, are you saying that Kevarian = Vader? Because I didn't see her that way in 3PD. It seemed like she retained the most of her humanity of any of the magic practitioners in a world where the author explicitly states that working magic slowly and inexorably turns you into a star-skeleton psychopath megalomaniac. It will be interesting to see what this prequel sheds new light on her character, then.
posted by seasparrow at 9:48 PM on February 11, 2020

> "And kyrademon, are you saying that Kevarian = Vader?"

The discussions between the King in Red and Elayne about dealing with their bodies after dying really stuck with me. Doing exercises to increase bone mass for when you're an eventual walking skeleton was certainly not something Pratchett covered in his Discworld novels.

I was going to ask if the Vader was Temoc or Caleb, but I'm reading "ahead" to Two Serpents Rise.
posted by fifteen schnitzengruben is my limit at 7:36 AM on February 12, 2020 [1 favorite]

I just finished the first five books, in publication order. I found this one the hardest read. Two Serpents Rise gave me a pretty decent idea of how things were going to end up, and I expected it to be a slog because of that. Elayne Kevarian is what made it work, for me. Her attempts to prevent her client from doing anything catastrophically stupid, and to mitigate damages for all parties, made the story a lot more gripping than I expected. Instead of a slog, it was a horror story. "Don't open that door! Listen to the attorney! You idiot!"

Just finished it myself, having decided to read them for the first time in chronological order rather than publishing order. Very interesting "Magic by way of Capitalism" vibe, what with soul savings accounts and really leaning into the "magical contract" side of things. The heroine saved the day by binding insurance to her will!
posted by Mr.Encyclopedia at 11:43 AM on April 6, 2021 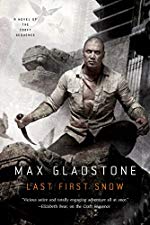