Rick Wilson, the longtime Republican strategist and bestselling author of Everything Trump Touches Dies, is back with a guidebook for beating Trump’s tricks, traps, and tweets in 2020.


“I’m telling you this because Democrats are going to lose to Donald Trump in 2020 unless they understand what my former team is about to do...I wish we lived in a perfect world where all of this would be settled by a scholarly discourse, but this is a chain fight in Frogass, Alabama... [T]here is no bottom. There is no shame. There are no limits. He’ll push beyond all norms and boundaries, because losing this race most likely ends with a trip to prison. Winning means a century of Trumps. ...[P]olitics triumphs over policy, and passion triumphs over ideology... They will burn this fucking country to the ground to win. You’ll cry out in horror at what they’ll do and how far they’ll go. They will ignite a race war, wreck the economy, and abuse their fellow humans to win... If I can leave you with one final piece of counsel, it is this: Compromise on everything except your commitment to his absolute, crushing defeat.”

Kirkus: "A caustically funny, outraged, and deadly serious analysis."
posted by MonkeyToes (2 comments total) 2 users marked this as a favorite
Some notes about the book:

Part 1, The Case Against Trump or Four More Years in Hell, covers the American swamp, racism in the White House, cruelty as statecraft, economic bullshit, McConnell and court-packing, the destruction of the environment, the imperial dynasty, and the cost to America’s soul. It’s nothing mega-thread readers haven’t already thought or said, and that particular choir will be making “get on with it, get on with it” gestures. But Wilson’s preaching to a wider group, and he’s profane and scary at the same time.

Part 2, The Myths of 2020, dispenses the following advice: it’s not a national election, focus on the 15 states in play; it’s not about policy, it’s a referendum on Trump; America is not as woke as you think; Obama supporters won’t turn out without Obama; kids don’t vote and olds do.

Part 3, Army of Darkness: Trump’s War Machine, reminds us that smart, data-driven people work for this campaign and that “[g]uys and girls in my former business can and will transform any lack of Democratic discipline into attacks that cut you off at their knees.” Giving no fucks is Trump’s best weapon, and he will use it shamelessly; his online fundraising is, to use the technical description “really fucking huge.” Expect more active measures from the Russian government. Deep fakes and oppo research have roles to play too, but the death of truth may be his biggest weapon—that and “how readily voters have abandoned honesty and truth as necessary to a healthy society.” (Yet he recommends the Democratic candidates drive hard on Trump as “a liar, a discredited and weak man dependent on a curtain of absurd deceptions to maintain his fragile self-image and political status”).

Part 4, How to Lose: fly be the seat of your pants and disregard data; play the campaign and lose the reality show; ask the wrong polling questions; magical thinking; fighting the culture wars; reviving the Clintons; working with Republicans in Congress.

Part 5, How to Win: Only fight the Electoral College Map (FL, PA, OH, GA, MI, NC, VA, AZ, MN, WI, CO, IA, NV, ME, NH); commentary on each of these states, and an assertion that Ohio’s going to be the toughest challenge for Dems. Speak American (“Dems need to dig up a slim volume by former Bill Clinton speechwriter David Kusnet called Speaking American, published in 1992”; framing advice on abortion, guns, immigration, the wall, the economy, the media, judges, no collusion, socialism, immigration). “[B]e vernacular, colloquial, and relatable….For once, tell hem it’s not about you, or the party, or some book of policy proposals but about them.” Attack, and don’t stop. You’re going to feel terrible. It will be terrible. Target attacks to Trump’s weaknesses—his business failures, his tax returns, his lack of wealth; his self-image, reminding him that he’s not physically well enough to be in office (the on-stage weigh-in at the debate!). Make plans, advertise now, roasting the president and trying to move votes from pro-Trump to Trump-questioning. Hire disciplined team who are straight talkers in private and “smart, loyal communicators in front of the cameras and on social media.” VOTER REGISTRATION, LIKE, YESTERDAY. Turnout. Lump Trump in with racists, channers , and remind voters that this guy has chosen to surround himself with evil people. Tell remorseful Trump voters that it’s OK to vote for something else, and that they don’t have to stay stuck in shame, that normalcy once more is a pretty Ok reason to vote D. Give up on right-leaning evangelicals. They’re not coming back. Don’t bullshit WWC Trump voters about jobs coming back. Be the party of markets, family, security, and protection for pre-existing conditions. Legal campaign fuckery: amplify the Libertarians, boost the GOP challengers to Trump, prank party lines, kill your spoilers. KEEP INVESTIGATING, and get these people taking oaths, grill them, take pictures of them having to testify. Be ready to go after EVERYONE in the Trump orbit.

Fight like this election could be the end of the American experiment.
posted by MonkeyToes at 4:50 PM on February 22, 2020 [3 favorites]

I have yet to read this. And I am willing to accept that Wilson genuinely wants the democrats to beat Trump. But making the election a referendum on Trump is a terrible idea. Clinton ran against Trump more than she ran for office; the democrats assumed she would win because of the strength of the case made against Trump. But if the democratic candidate doesn't first make a case for himself or herself, it won't matter. Voters don't vote against candidates, they vote for candidates. If the voters don't want the democratic candidate, their hate for Trump won't motivate them to go out there and vote for a schmuck. They'll just stay home. It's what happened in 2016.
posted by kittens for breakfast at 10:20 AM on February 23, 2020 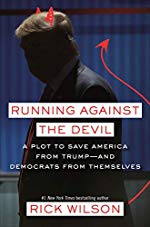