A modern classic of personal journalism, The Orchid Thief is Susan Orlean’s wickedly funny, elegant, and captivating tale of an amazing obsession. Determined to clone an endangered flower—the rare ghost orchid Polyrrhiza lindenii—a deeply eccentric and oddly attractive man named John Laroche leads Orlean on an unforgettable tour of America’s strange flower-selling subculture, through Florida’s swamps and beyond, along with the Seminoles who help him and the forces of justice who fight him. In the end, Orlean—and the reader—will have more respect for underdog determination and a powerful new definition of passion.
posted by Homo neanderthalensis (4 comments total) 4 users marked this as a favorite
I have no idea what I expected from this book. It’s one that’s been recommended to me from a lot of corners so I dove in. I knew from my own plant habits and my job that plant people can be a special flavor of nuts- but looking at the man at the center of this maelstrom gives me a good bar to never cross. This is a early 90s story about obsession and Florida and law and Orchids- and some of the passages are breathtakingly funny- because people contain multitudes and Susan Orlean is a very good writer. Very much a tale that proves the adage that truth is stranger then fiction.
posted by Homo neanderthalensis at 8:52 AM on February 23, 2020 [2 favorites]

The original New Yorker article is online, for anyone curious. It truly is a delight.
posted by roger ackroyd at 9:32 AM on February 23, 2020 [2 favorites]

The odd thing about Susan Orlean's work for me is that I gobble it up, love every second of it, and then completely forget any details about it shortly after. (I just had this experience with The Library Book.) I think it's because she mixes SO much detail with fast-moving plots, and I'm not disciplined enough to take my time with her writing, I MUST know what happens!

That being said, I remember loving this book but I don't remember very much about it at all. I also think the quirkiness of the 2002 movie "Adaptation" - theoretically based on this book - chased any remaining memories out of my brain.
posted by rogerroger at 1:54 PM on February 23, 2020 [3 favorites]

I agree, I seem to remember liking the book but I can't really remember anything that happened.
posted by mikek at 4:31 AM on April 25, 2020 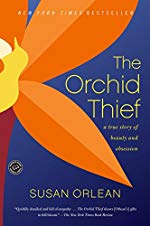