A teenager navigates the complexities of high school, family and her sexuality while dealing with new superpowers; based on Charles Forsman's graphic novel.


The show stars Sophia Lillis and Wyatt Oleff, both of whom were in IT and IT Chapter Two, among other things. (The premise also bears a resemblance to the Stephen King book Carrie.) Charles Forsman also created the graphic novel that was the basis for The End of the F***ing World.
posted by Halloween Jack (21 comments total) 5 users marked this as a favorite
I Am Not Okay with This is streaming on Netflix in the US.
posted by Etrigan at 7:46 PM on February 26, 2020

IndieWire Review: A Sharp Spin on the Typical Superpower Origin Story - Sophia Lillis anchors this Netflix series, one that wisely steers away from its sci-fi DNA to find the relatable human elements underneath.

Variety - ‘I Am Not Okay With This’ Co-Creator on ‘Carrie’ Inspiration, Powers as ‘Creative Metaphor’

Finished it! I watched it with a friend, and we loved everyone, except the person whose head we wanted to see explode from the first episode.

Sophia Lillis is so great in this. Her acting is a level above everyone else's. Her performance is muted, but in the very best way—it's so true to the character and it attunes the audience to how Sydney's inner-life can be seen to frequently slip through her repression in the margins and then, occasionally, overwhelm in moments of unalloyed joy or explosive rage.

I binged the whole thing last night, which is hard not to do as it's only seven episodes of 25 minutes each.

I was (am) super-annoyed that it was so short, ended on a cliffhanger, and a second season isn't even greenlit yet.
posted by Ivan Fyodorovich at 10:43 PM on February 26, 2020 [1 favorite]

I was (am) super-annoyed that it was so short, ended on a cliffhanger, and a second season isn't even greenlit yet.

Yeah, this felt like half a season. At least it was short, so if for some reason they never continue it, at least we've not invested much time in it.
posted by axiom at 8:31 PM on February 27, 2020

From this Vulture interview with Charles Forsman, it seems that the comic ended very differently for Syd, so season 2 if it happens will be uncharted territory. So I'm glad they didn't go with the book ending, whether they get another season or not.
posted by oh yeah! at 4:17 AM on February 28, 2020

Yeah this was pretty good but only if I take it as like the first half of a season which is, well, missing its second half. It was way, way too short and I am worried as usual there won't be another season.
posted by KTamas at 12:24 PM on February 28, 2020

Just started episode 1. It's interesting that I wasn't sure what era this is set in until they mentioned and used smart phones. Some segments of the country fashion/neighborhoods/furniture/vehicles haven't changed much in the last 20 years, and it's not often they're the setting for a show like this.
posted by numaner at 3:55 PM on February 28, 2020

I read the graphic novel, and was one of the people who was very unhappy with the ending, but I'm not sure that this adaptation--which I was otherwise very, very happy with, and enjoyed a lot--really nailed it either. The asshole jock apparently develops ninja powers and steals it from her without her ever noticing, and when he starts ranting about it on stage, none of the adults tries to stop him, or even cut the mike. Not sure if they're going to have a second season, but if they do, I don't want to leave the other characters in Syd's life just so that she can join the Pennsyltucky X-Men.
posted by Halloween Jack at 8:45 PM on February 28, 2020

"...and when he starts ranting about it on stage, none of the adults tries to stop him, or even cut the mike."

Yeah, wow, did I ever find that annoying. Suspension of disbelief, also exploded.

Impulse does a better job with this theme. Still, I approve of confronting the fact that, if you're super-powered, it's going to be terribly easy to kill someone inadvertently. Or intentionally, for that matter.

Otherwise, I saw much of this as being a metaphor about discovering one's socially-fraught sexual orientation, sexuality, identity, and coming out. For example, it's revealing that, "sometimes, late at night, [she] thinks about touching [herself]", but never does.

Likewise, it's a metaphor about teen female rage, which is absolutely unacceptable if it's actually dangerous. (Especially as contrasted to teen male rage, where the very real danger is romanticized.)

The ending conflicts pretty badly with the former, but works well with the latter.
posted by Ivan Fyodorovich at 9:07 PM on February 28, 2020 [1 favorite]

Wait they had smartphones? I legit missed that. I'm sure the show is purposefully anachronistic, but I would have put it to the mid-00s partly bc of a specific laptop model they show that was released in '06.
posted by KTamas at 2:43 AM on February 29, 2020

I watched the entire thing yesterday. Found it quite addictive. Hoping for more seasons, of course.

Clearly an alternate near-present. Smart phones, yes; but the only car we see driving is Stanley's early 80's beater (i'll have to rewatch to actually look for what kinds of cars are also shown) ; they play beerpong (kinda) at the party; but the school is very 50-70's.

I agree that Sophia Lillis was superb. I spent the first 2 or so episodes convinced the kid playing her brother was the same actor that plays Will Robinson in Lost in Space, but it isn't. Must be a look for kid actors. I found Wyatt Oleff to be a very understated scene chewer, and I enjoyed his awkwardness immensely.

While the Carrie moment was telegraphed from the very opening scene, I was still shocked at the way it happened. It was a nice bit of season long suspense, wondering whether all of her friends wold somehow be turned against her and in on a joke (happily, no).

I also found the crush/romance between Syd and Dina to be well done. Little moments like the two straws in the milkshake, the dancing, of course, the way Dina's suggestion to "bring it" took Syd out of her funk and created a moment with her mom; and the almost kiss at the homecoming....
posted by OHenryPacey at 11:21 AM on February 29, 2020 [3 favorites]

but the only car we see driving is Stanley's early 80's beater
I kept a look out, and in one of the scenes where she and Stan are driving through the neighborhood, there's a pretty modern looking white large SUV, I think a Jeep or a Range Rover if I'm remembering the front correctly.

I was also wondering why none of the adults were stepping in to stop Brad.

I liked that they portrayed her coming to terms with her sexuality the same time as her powers. Interesting to see.
posted by numaner at 1:28 PM on March 2, 2020

Likewise, it's a metaphor about teen female rage, which is absolutely unacceptable if it's actually dangerous. (Especially as contrasted to teen male rage, where the very real danger is romanticized.)


Maybe not just teen female rage. I haven't been a teenager in a while and I still haven't come to terms with my anger.
posted by bunderful at 7:39 PM on March 2, 2020

I feel like there are homages to John Huges all over the place. The music is from the '80s, of course, but Stanely is a bit like Ducky from Pretty in Pink, and the episode with the library seemed like definitely a nod to Breakfast Club with the plotting and whatnot.

After writing this, I just did a quick search, and apparently there are some John Hughes easter eggs hidden in the sound track, but I don't know what they are...
posted by SpacemanStix at 12:11 AM on March 5, 2020

Was there a bit of carry here at the end?

I loved how Pennsylvania this show was; they must of spent so much time scouting locations. The great thing about shooting a series set it some nebulous 80s to 2000s timeframe is that nothing has changed in those small towns so they didn't really have to alter the exteriors of anything.
posted by octothorpe at 6:29 PM on March 10, 2020 [2 favorites]

We just finished binging this and, wow, really loved it. Lillis is so easy to like in the part. Yeah, there are bits and pieces from many other shows, but the show embraces them openly. I mean, from the very first scene we’re told there’s a Carrie homage coming down the line, and its cool.

The second season has been cancelled. Scripts were written, but coronavirus blocked production.
posted by Pronoiac at 1:58 PM on August 21, 2020 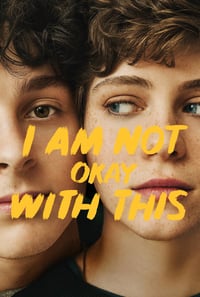