A drunken, hard-nosed U.S. Marshal and a Texas Ranger help a stubborn teenager track down her father's murderer in Indian territory.


After hired hand Tom Chaney (Jeff Corey) murders the father of 14-year-old Mattie Ross (Kim Darby), she seeks vengeance and hires U.S. Marshal "Rooster" Cogburn (John Wayne), a man of "true grit," to track Chaney into Indian territory. As the two begin their pursuit, a Texas Ranger, La Boeuf (Glen Campbell), joins the manhunt in hopes of capturing Chaney for the murder of a Texas senator and collecting a substantial reward. The three clash on their quest of bringing to justice the same man.

Moira Walsh: Be that as it may, the film is an undeniably vivid, exceedingly well directed (by veteran Henry hathaway) frontier tale that "tells it like it was." The brutality, callousness, individualistic instinct for self-preservation are there because they have to be, and we cannot help being relieved that life, for most of us, no longer imposes such cruel options. But a sense of our common humanity is there, too, and we can also ponder on what we have lost. The point is that True Grit, unlike The Wild Bunch and a distressing number of other recent films, allows its story to speak for itself without self-righteous editorial comment. As a result it is apparently going to be seen and enjoyed by vast numbers of people, which after all is one ingredient without which no film communication is possible.

Peter Canavese: "Who knows what's in a man's heart?" This plain rhetorical question from a fourteen-year-old girl, though not directed at aging cowboy Rooster Cogburn, certainly applies to him. Once Cogburn has met young Mattie Ross, he witnesses her indomitability and wonders, "By God, she reminds me of me!" . . . The 1969 film True Grit—based on Charles Portis' 1968 novel—doesn't overtly dwell on this note of gender transgressiveness, and yet it's there in every scene: the girl with the strength of a man, and the man with a sensitive heart (albeit under layers of crust).

Josh Larsen: One of Hollywood’s true curiosities. At times a charming, kiddie Western, this John Wayne vehicle also has a real nasty streak. It’s perhaps best personified by an early hanging scene, during which families gather to picnic and watch. When an adult tries to cover the eyes of a young girl, she says, “No. I’m here. I’ll see it all.” That girl is Mattie Ross (Kim Darby), a preteen tomboy seeking revenge on the scoundrel who killed her rancher father. And so she hires Wayne’s Rooster Cogburn, a frequently drunk marshal who explains the high body count in his wake by saying, “I never shot nobody I didn’t have to.” Darby and Wayne are spectacles, each in their own way. She’s a pushy, precocious pest; he bugs out the one eye that isn’t hidden by a patch and slugs from his jug as if it were part of an acrobatic performance. Yet somehow, they balance each other out. (Wayne even won an Oscar.) Mattie and Rooster share a talk during an overnight stakeout that allows each of them to soften a bit, and that underlying affection is carried through the rest of the movie. Meanwhile, on the nasty side, look for a young Dennis Hopper getting some fingers cut off.

Trailer
posted by Carillon (5 comments total) 2 users marked this as a favorite
Charles Portis recently passed away, so I decided to go back and watch both the films and reread the book. Comparisons between this True Grit and the Coen's are inevitable, watching them so closely together they really do share the same DNA and to my mind are pretty close together.

It's funny I made an off hand comment in the Coen's tread about True Grit that I think this is the better version, and now having revisited both so close together I really do think that's true. I certainly appreciate chunks of the newer one, but I find the bookends of this one much more effective, and really act as commentary on violence and the pursuit of justice that doesn't come through as clearly in the 2010 version.

Specifically for me I think seeing Mattie and her father interact and then the murder primes the pump, and I think the treatment too of the hanging scene is done more deftly and shows what a communal event this so called Justice is, with the judge himself watching. Plus at the end actively losing La Boeuf, and having Rooster and Mattie connect in the graveyard makes the costs seem higher to me.

Which isn't to say they're not both great, and that it's not splitting hairs. But just has been an interesting exercise as I am at home sick watching film.
posted by Carillon at 10:33 AM on March 3, 2020 [4 favorites]

I like the newer one better but I like them both. The book is hilarious as it's told from Mattie's POV.
posted by small_ruminant at 5:06 PM on March 3, 2020 [1 favorite]

Kim Darby... who played Lane's mom in Better Off Dead. John Wayne couldn't stand her. Knowing what I know of Wayne, though, I don't know how far I'd trust his judgement.
posted by azpenguin at 7:26 PM on March 4, 2020 [2 favorites]

neither compare to the book of course, which is a very fast read

Yeah, it's not a long book, but I burned through it last night/this morning. Soooo goood.

Got a hold of both movies and plan on watching them soon; haven't seen '69, and my foggy recollection of '10 was that Hailee Steinfeld was terrifying/amazing but the whole was lacking.
posted by Alvy Ampersand at 8:56 PM on March 4, 2020 [1 favorite]

Not a day goes by but there comes some new report of a farmer bludgeoned, a wife outraged, or a blameless traveler set upon and cut down in a sanguinary ambuscade. The civilizing arts of commerce do not flourish there. 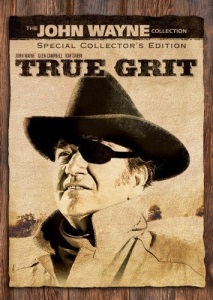