A young thief, seeking revenge for the death of his brother, is trained by the once great, but aged Zorro, who also pursues vengeance of his own.


After being imprisoned for 20 years, Zorro -- Don Diego de la Vega (Anthony Hopkins) -- receives word that his old enemy, Don Rafael Montero (Stuart Wilson), has returned. Don Diego escapes and returns to his old headquarters, where he trains aimless drunk Alejandro Murrieta (Antonio Banderas) to be his successor. Meanwhile, Montero -- who has secretly raised Diego's daughter, Elena (Catherine Zeta-Jones), as his own -- hatches a plot to rob California of its gold.

Roger Ebert: "The Mask of Zorro" has something you don't often see in modern action pictures: a sense of honor. The character takes sides, good vs. evil, and blood debts are nursed down through the generations. It also has a lot of zest, humor, energy and swordplay; it's fun, and not an insult to the intelligence.

The movie resurrects a character first played in silent films by Douglas Fairbanks Sr., and again on TV in the 1950s by Guy Williams, and launches him in what the producers no doubt hope will be a series. The director, Martin Campbell, did the Bond picture "GoldenEye," and in a sense "The Mask of Zorro" is a Bond picture on horseback: There's the megalomaniac villain, the plan to take over the world (or, in this case, California), the training of the hero, the bold entry into the enemy's social world, the romance with the bad guy's stepdaughter, and the sensational stunts. There's even the always-popular situation where the hero and the girl start out in a deadly struggle and end up in each other's arms.

Janet Maslin: ''The Mask of Zorro'' extends a tempting invitation: travel back to the days when swashbuckling was serious business, when boyish adventure films still had their innocence, when the bravado of thrilling stunt work was all a movie needed in the way of special effects. With a wealth of charismatic Zorros (two), a smashing heroine and a dauntless love of adventure, this is hot-weather escapism so earnestly retrograde that it seems new.

MaryAnn Johanson: The Mask of Zorro is a movie to remind you what Hollywood used to be: a dream factory whose uncynical and unhyperbolic entertainments could sweep you up into the screen and make you forget yourself and the real world for two hours. The last movie to be this viscerally exciting and satisfying is probably Raiders of the Lost Ark — and the last movie this charming and delightful must be The Princess Bride . . . The Mask of Zorro satisfies on an intellectual level, too. You don’t need to know who Joseph Campbell is to appreciate the mythic scale of Alejandro’s journey from pupil to master or to feel that this kind of hero’s journey story just resonates more and feels more right than, say, a tale of a bunch of guys blowing up an asteroid.

Trailer
posted by Carillon (9 comments total) 1 user marked this as a favorite
I was home sick watching a bunch of movies recently, was surprised at how well I thought this held up and how much fun it still was. I remember seeing it in theaters back when it came out, and maybe on DVD a few times, but it has to have been over a decade since I checked it out. Definitely worth revisiting.
posted by Carillon at 10:20 AM on March 4, 2020

Same with me. Saw it in the theater, then at other times on cable over the years, and just recently gave it a watch on Netflix.

It holds up really well, yes. Antonio really nails it. So too do Anthony and Catherine. Montero is a good villain. Captain Love has always been for me the one weak link. The character just didn't quite work for me.

But hey, we don't watch Zorro movies for the great writing, it's all about the swordplay! And this movie does have great swordplay. The guy who trained the actors for MoZ said later that Antonio was the most naturally gifted person he'd ever trained and it definitely shows.

Aside from everything else, I think this movie was kind of a swan song for how Hollywood did action scenes. The Matrix came out a year later.
posted by Fukiyama at 11:27 AM on March 4, 2020 [4 favorites]

Apparently in the final sword fight, it was Banderas' idea to have the sun glint off the blade as he pulls it, and it was done practically with only 3 tries! Definitely stood out to me watching it how epic that moment became because of it.
posted by Carillon at 11:35 AM on March 4, 2020 [1 favorite]

I unabashedly love this movie and have watched it many times. It has everything, the acting (except for the aforementioned Capt Love), the swashbuckling, the pacing, the plot, the chemistry between the actors, the humor. The ...disappointing sequel several years later just proved how difficult it is to make good films.
posted by TWinbrook8 at 2:10 PM on March 4, 2020 [2 favorites]

It's just too bad they couldn't give him a history and explain something about his motive. Everyone else has a history, even if it's pretty bare bones. Love is Montero's sadistic enforcer who also has his eye on Elena. And that's it.
posted by Fukiyama at 7:03 PM on March 5, 2020

I think between Antonio Banderas and Catherine Zeta-Jones, this movie was an important factor in determining that I was not entirely straight.

I'd forgotten about all the great horse tricks there were in this movie -- obviously that whole sequence where Alejandro-Zorro gets unseated from Tornado then jumps onto the horse of the last soldier in the chase and leapfrogs his way to the head of the chase was spectacular. But that shot in the opening sequence where Diego-Zorro rides his horse up the some stairs? I wonder how long it took to teach a horse to climb stairs without hobbling any in the process?
posted by oh yeah! at 1:18 PM on March 6, 2020 [2 favorites] 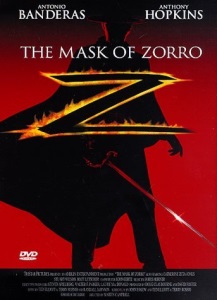