A recently widowed man's son calls a radio talk-show in an attempt to find his father a partner.


After the death of his wife, Sam Baldwin (Tom Hanks) moves to Seattle with his son, Jonah (Ross Mallinger). When Jonah calls in to a talk-radio program to find a new wife for his father, Sam grudgingly gets on the line to discuss his feelings. Annie Reed (Meg Ryan), a reporter in Baltimore, hears Sam speak and falls for him, even though she is engaged. Unsure where it will lead, she writes Sam a letter asking him to meet her at the Empire State Building on Valentine's Day.

Caroline Siede: While some rom-coms end in a kiss, some end in a wedding, and some don’t offer a romantic happy ending at all, Sleepless In Seattle is something even more unique: a romantic comedy that ends with its central couple meeting for the very first time. That means Ryan and Hanks have to sell a romance despite barely sharing any screen time. Remarkably, they pull it off.

Michael Wilmington: We don’t make those kind of Lubitsch-Wilder-Capra movies anymore, because it’s hard to kid about what goes on behind bedroom walls when the bedroom doors have long since been flung open. So Ephron invents strategies to keep us, teased, outside the boudoir. In “When Harry Met Sally . . . ,” she kept her lovers separate by making them bickering friends; in her directorial debut, “This Is My Life,” she took the viewpoint of two little girls; here, working from Jeff Arch’s original script, she makes Hanks and Ryan bicoastal dream lovers, destiny’s darlings.

MaryAnn Johanson: Writer/director Nora Ephron hit a high point with this delightful 1993 film, perhaps the epitome of the modern romantic comedy to which many a movie of the past decade has aspired and few have even approached in its warmth, naturalness, and genuine spirit of amour. . . Matters of destiny are usually only this magical in the classic tearjerkers of Hollywood past, to which Ephron alludes with a wonderfully deft hand

Bonus, the trailer recut as a horror movie
posted by Carillon (6 comments total)
My only beef with this movie—and it's a big beef—is that the dramatic climax of a film called Sleepless in Seattle takes place on the observation deck of... the Empire State Building. I mean, the Space Needle was sitting right over there, you Hollywood dipshits!
posted by Atom Eyes at 3:04 PM on March 17, 2020 [7 favorites]

Favorite part was Sam (Hanks) and his son pushing off from a dock on Lake Union and after rowing a bit landing on Alki beach. In a power boat that's a good 4-5 hour trip through the Hiram Chittenden Locks and avoiding fast moving ferry's.
posted by sammyo at 5:19 PM on March 17, 2020 [5 favorites]

Sleepless in Seattle is streaming in the US via DirecTV and FuboTV.
posted by Etrigan at 6:26 PM on March 17, 2020 [3 favorites]

Three of my friends and me all watched this for the first time right after we moved from Arizona to Seattle. They were renting a really shitty rambler in Madison Valley for a few months before it was about to be torn down and turned into townhomes (that may be the most "Seattle" sentence I've ever written), and it smelled like mold and came with terrible furniture and a basement full of creepy dolls, but we had such a fun time watching it projected onto their living room wall and kept quoting it for the next week or so randomly.

I went to a party a year later on the houseboat featured in the movie and got very drunk and sat on the bench at the end of the pier for like, 20 minutes before I got too cold and went back inside. Just because it was in the movie. Good times.
posted by mollywas at 9:36 PM on March 17, 2020 [3 favorites]

At the height of my drag days I used to keep a little portable TV in the bathroom to entertain me during the HOURS it took to get prepped for a night on the town. The TV only got two or three channels so I ended up half-watching whatever was on. One night it was Sleepless in Seattle. It seemed like any other romantic comedy until the scene where Rosie O'Donnell goes full anti-trans out of nowhere. I just looked up the line:

The guy could be a crackhead, a transvestite, a flasher, a junkie, a chain-saw murderer...

I claimed this movie was my favorite during high school film class (it's not, that's When Harry Met Sally) because we had to talk about the symbolism, and this movie does it very well. And in general, I think it does what it does really well. Builds a love story between two people who only meet at the end, builds commonalities, and still has time for random snark like, "Well, I cried at the end of The Dirty Dozen." The cute kid is adorable but not too precious, ditto his friend.

I do think Bill Pullman takes the breakup flabbergastingly well, but one can only assume he wasn't that into her either deep down there.
posted by jenfullmoon at 8:18 PM on March 19, 2020 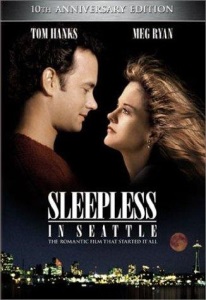