After recent events, Matt goes into in hiding with a guilty conscience, and he has the airlock codes. Chaos ensues when a narrow window for escape on a rescue shuttle suddenly becomes available. [Season finale; renewed for Season 2]

... the season finale of Armando Iannucci’s erratic space comedy resolves very little, ultimately ending on a massive cliffhanger that was definitely counting on the show getting renewed for a second season. But to “Eight Arms But No Hands’s” credit, it’s a tight and fast-paced half-hour of television, focused around two big plot points that highlight the quality of the ensemble (if not the quality of the show itself).

posted by filthy light thief (2 comments total) 2 users marked this as a favorite
I greatly enjoyed this show. The combination of comedy and science fiction really grabs me. I still prefer 'Future Man' in general, but 'Avenue Five' certainly has some great things going for it.
posted by No Robots at 11:23 AM on March 20, 2020 [1 favorite]

It amused me more and more over the course of the episode that people, when given the opportunity to be in the shuttle that will take them back to their lives within apparently a matter of hours rather than months or years, would just... not do that because someone told them to get up. I figured it would be a fistfight, but no, it was just a series of “No!” “Oh, um, okay...” until time ran out.
posted by Etrigan at 4:51 AM on March 23, 2020 [1 favorite] 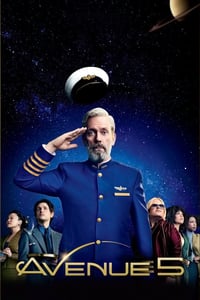