Lily and Jamie visit Forest looking for answers. Katie and Lily have an awkward chat. Lyndon wants back into Devs.

Lyndon breaks into Stewart's Winnebago and asks him to help him get his Devs job back, as he is unwilling to abandon his work on the project. Lily awakes in the Napa motel James brought her to, and after deciding they cannot run, she decides to go back to San Francisco instead to confront Forest at his house. They find him there with along with Katie, who Forest says can answer Lily's questions. Katie confirms for Lily that she and Forest are lovers and that Sergei was killed by Kenton, and explains the nature of the Devs system - a powerful computer that can show the actions of any subject in the past or future. However, the future projections cease at a certain point in time, beyond which there is only impenetrable static, due to a supposed breakdown of the laws of physics themselves. Katie tells Lily that this event is now only 21 hours away, and she believes Lily, who has been seen entering the Devs lab in the future, is the cause. Katie's deterministic view angers Lily, and she leaves with Jamie; Kenton, who had been watching them since they arrived, follows them. Lily decides to go back home, and invites Jamie to sleep in her bed where they're seen kissing

posted by thedward (14 comments total) 5 users marked this as a favorite
The actor playing Katie is really good.

I like the idea of Kenton becoming Michael Palin in A Fish called Wanda, his condition slowly deteriorating as he continues to fail to stop Lily.

Some intended symbolism/significance with that Frisbee, maybe, but I wasn't playing close enough attention to follow it.
posted by condour75 at 5:04 PM on April 3, 2020

I really enjoy the moodiness and the music in this show, the philosophizing over determinism and its relationship to a magical quantum computer is a bit off, and that dialectic thing with Lily and Katie seemed forced (Lily is smarter than that , I think)

I'm an ultimate frisbee player, so the whole scene with Forrest and jamie playing 'bee and Forrest saying "don't you watch the olympics?" had me howling.

I'm waiting for Lily's homeless friend to give Kenton the beatdown he deserves.

Some intended symbolism/significance with that Frisbee, maybe, but I wasn't playing close enough attention to follow it.

The EP started with Forest playing frisbee with his daughter, so I think it was to show Forest can't help himself but include decent people he just met into his "family".

Early on, people thought we were seeing different universes at different times, and I'm now really to think that is true. First episode Forest and Katie took part in the murder of Lily's boyfriend, but now (as Kenton said) everyone is super pals. I know there is an aspect of "we can't murder these people because at least Lily is supposed to die tomorrow night", but it really seems Forest and Katie are different people now. Definitely Forest.
posted by sideshow at 6:43 PM on April 3, 2020 [1 favorite]

As long as what Forest is observing validates his belief in determinism, he is (almost) cool as a cucumber. The reason he was so upset the day after Sergei's death is that the reality of the murder was no less impactful to him despite his firm belief that it was inevitable, and there for he (and Kenton, and Katie) not culpable in an ethical sense. That is also why he freaked out so hard on the dev who introduced the many-worlds theorem to get better fidelity - because it meant that not only could he have avoided his daughter's death, but also that he was now a full-on murderer in the free-will sense. But this last episode, when Lily shows up, clearly fits into what Forest and Katie believe to be the Grand Plan. So they're calm, even empathetic, because they feel like train cars on a track. Kenton, who doesn't believe in that fate crap, is pissed because it is clear to him that there is no such thing as loyalty with this people - only fealty to the Devs machine, which they treat as an oracle or prophecy. So I don't think they're different people than they were at the start - we're just seeing them in a slightly different light. Also they're very close to the event horizon.
posted by grumpybear69 at 9:58 PM on April 3, 2020 [5 favorites]

This has to be one of the best (at least most interestingly) directed hours of TV that I can remember watching. That dialog between Katie and Lily at the table was mesmerizing, the use of straight on shots of the actors talking into the camera usually annoys me (unless it's Ozu) but it worked so well here.

The cinematography was astounding too; who know that you could make a Silicon Valley suburban neighborhood look so menacing?
posted by octothorpe at 6:25 AM on April 4, 2020 [5 favorites]

When Katie was asking Lily to name something random I kept wanting her to propose "the precise time of decay of a specific atom of a radioactive isotope". Despite the references to quantum physics, Katie's explanation made it seem like the computer relies on classical determinism.
posted by paper chromatographologist at 10:32 AM on April 4, 2020 [16 favorites]

The pilot-wave algorithm was classic determinism. The many-worlds algorithm, which a) is what Katie was all about when she was in school and b) is what she applied to the visual processor to get higher fidelity, must take quantum non-determinism into account. So, if she knows this, why is she still towing the determinism line, even to Lily? Is it because she loves Forest so much that she wants to nudge things in that direction, despite the fact that she is fully aware of determinism being untrue?
posted by grumpybear69 at 12:03 PM on April 4, 2020 [5 favorites]

paper chromatographologist: I was shouting the same thing at my TV! Felt like a glaring omission, and I would have liked to have seen some kind of lampshading or even attempt at an explanation.
posted by adrianhon at 6:10 AM on April 6, 2020

A couple things:
* I felt like Katie pregamed the conversation with Lily. I wonder how extensively she does that.
* Kenton saw Jamie just drop the frisbee on the ground, instead of throw it back to Forest; that seems like a party foul, not the most buddy-like of moves, right?

Edit: on reading the conversation, now I want to see them predicting a Geiger counter's readings, thx guys
posted by Pronoiac at 3:34 PM on April 8, 2020 [1 favorite]

Edit: on reading the conversation, now I want to see them predicting a Geiger counter's readings, thx guys

I thought it was interesting that the two determinism fanatics spent so much time talking about their feelings. "They're brave. We like them, right?" "I'm deeply in like with you..." But if everything is predetermined from that initial cause, how and what you feel shouldn't/don't matter.
posted by ssmith at 1:11 PM on April 9, 2020

But if everything is predetermined from that initial cause, how and what you feel shouldn't/don't matter.

I'll posit that Katie has already watched the highlight reel of her future up to the Event. She knows about the timing of the Event and it seemed that Forest was expecting Lily and Jamie, so why not watch a little more?

She already knew the "in like with you" conversation would happen. She's saying the words but inside doesn't even know if she means them.

And therefore she's inwardly in a completely passive state, uncaring and completely checked out, simply reciting lines to a drama she's already watched... because the universe demands it. She's dead inside but can't talk about it because such a conversation will not happen. So instead she smiles and talks about her affection because that's always what she will have done. She's 100% acting on instinct.

And then at the moment of the Event with completely decisiveness she actively does something extremely unwise and dangerous and permanent to prove she can actually make decisions again. She's accepted determinism but can't wait to escape back to the illusion of free will. She's a caged animal who is counting down the seconds until the moment she can lunge for the door.

(Or she has a complete mental breakdown because she had given up on acting like she has choice in life and doesn't know how to handle it when the possibility comes back.)

Forest, on the other hand, was a complete mess from losing his family and is generally happy to be floating through life on his tramlines where nothing matters and it's not his fault. For example, Kenton breaking hands.

Though I guess such opinions may reflect more about me than the actual show.
posted by Nonsteroidal Anti-Inflammatory Drug at 7:34 PM on April 21, 2020

There is foreshadowing in every conversation people have in this episode.
posted by Catblack at 6:35 PM on May 21, 2020 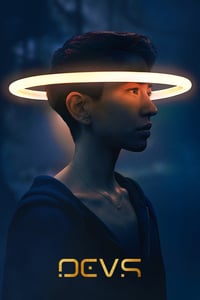