A 2003 South Korean psychological horror film written and directed by Kim Jee-woon. The film is inspired by a Joseon Dynasty folktale entitled "Janghwa Hongryeon jeon", which has been adapted to film several times. The plot focuses on two sisters who, after returning home from a psychiatric hospital, experience increasingly disturbing events involving both them and their stepmother.


A Tale of Two Sisters opened to very positive critical review and won Best Picture at the 2004 Fantasporto Film Festival. It is both the highest-grossing Korean horror film and the first to be screened in American theaters.

About the MeFi Horror Club.
posted by Literaryhero (6 comments total) 1 user marked this as a favorite
This movie reminds me so much of The Shining in the best possible way. I really wonder if there is a shop called something like 'Murder House Wallpaper' where you can get creepy wallpaper like that. Those long shots are so scary for some reason. Most of the scary movies I have watched recently haven't really done anything for me, but I just rewatched this with all the lights on in the house and was still freaked the hell out.

Man, when the period ghost (for lack of a better name) bleeds down the leg and the hand pops out. Holy crap! The girl under the sink? PHEW!
posted by Literaryhero at 4:02 AM on December 5, 2014 [1 favorite]

Fine then, Imma have a conversation with myself! About 7 years ago or so I was really serious about studying Korean, and to help my listening skills I decided to watch every Korean horror film I could find. I watched A LOT of really, really, really bad movies. I'm pretty sure that this one is the best I saw. I'm not sure about what came out since about 2007 or so, but most Korean horror I think is better to avoid.

There are a couple other decent films, though, if you are looking to expand on the sub-genre. Black House (검은 집) was both scary and surprising, and R-Point was maybe not so scary, but was still a solid film. At the other end of the spectrum, I can include basically everything else. Off the top of my head, Cello and Phone were terrible, and looking at the Wikipedia entry for Korean horror films brought back a lot of bad memories of movies I wish I hadn't wasted my time seeing.
posted by Literaryhero at 6:39 AM on December 6, 2014 [1 favorite]

Oh, I love this film! I think the girl under the sink is one of the scariest shots in a movie I've ever seen. The character of the stepmother was really well acted, I think. It's such a beautifully shot film as well.

It's interesting what you say about Korean horror movies, Literaryhero. I've enjoyed all the Korean movies I've seen, but thinking about it, this might be the only horror film of those. I will definitely be checking out Black House and R-Point.
posted by daisyk at 3:12 AM on December 7, 2014

This was a good movie, and beautifully filmed. So many creepy scenes with lovely vivid colors. I'll have to rewatch it sometime now that I know all the secrets. And if I ever get around to studying Korean, I'm sure I'll watch this five times in a row.

Saw and enjoyed this years ago, watched it again last night, glad to see it holds up very well. Agreed about the wallpaper, it feels awfully baroque, sometimes oppressively so. It does seem to fit the general mood, which to me feels surprisingly Gothic, at least compared to some of the other Asian horror I've seen. (Creepy house in the country, check. Wicked stepmother, check. Moody family with tragic secrets, check.) Agreed also that the use of color was pretty great; I especially liked this scene.

I was just thinking of the girl under the sink (which I agree was a really effective shot, especially the way it was presented in flashback rather than in the drama of the moment) and only now realized that it was, essentially, an image of a girl apparently trapped beneath something huge and heavy. Nice foreshadowing of the tragic reveal later. And you could argue that "being trapped beneath something huge and heavy" is destroying Su-mi as surely as it destroyed Su-yeon.

Anyway -- great movie, glad to see it covered here. Thanks for the pick and the post, LiteraryHero.
posted by Two unicycles and some duct tape at 5:46 PM on December 8, 2014 [2 favorites] 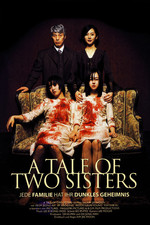