With a plan to exact revenge on a mythical shark that killed his partner, Oceanographer Steve Zissou (Bill Murray) rallies a crew that includes his estranged wife, a journalist, and a man who may or may not be his son.


Renowned oceanographer Steve Zissou (Bill Murray) has sworn vengeance upon the rare shark that devoured a member of his crew. In addition to his regular team, he is joined on his boat by Ned (Owen Wilson), a man who believes Zissou to be his father, and Jane (Cate Blanchett), a journalist pregnant by a married man. They travel the sea, all too often running into pirates and, perhaps more traumatically, various figures from Zissou's past, including his estranged wife, Eleanor (Anjelica Huston).

Scott Tobias: With its story about a filmmaker nearing the end of his creative life, plagued by middling reviews, wary backers, and the threat of mutiny from the crew, The Life Aquatic seems odd coming from the most acclaimed young comedic director of his generation. But Anderson has a strong emo streak, which surfaces in Murray's broken relationships—with his wife, who was once married to his arch-nemesis (Jeff Goldblum); with his would-be son, whom he never knew; with Dafoe, who worships him like a spurned lapdog; and with Blanchett, who resists his tired advances. For a movie so consumed by colorful and frivolous touches, The Life Aquatic breathes a heavy sigh of resignation, though the beautiful ending goes a long way toward justifying all that navel-gazing. Mostly, the film delights with its scrupulous minor details: The pastel animated sea life, the onboard dolphin "scouts" that have never lived up to their billing, and the hilariously second-rate action sequences, which look like they were staged by Rushmore's Max Fischer Players. Even when caught in a rut, Anderson's obsessive vision still yields many exhilarating surprises.

Jessica Winter: Suffused with lush yet faded primary colours like a 30-year-old Kodak snap and spiced with Henry Selick’s stop-motion animations and a starry (if often idle) cast of supporting players, ‘The Life Aquatic’ is a beautifully appointed but airless dollhouse-by-the-sea, populated by wistful figurines in their matching little red caps and Team Zissou Adidas, and scored to Seu Jorge’s deckside acoustic renditions of Bowie songs in Portuguese. The movie pokes along in a manner at once listless and affable, like a series of semi-improvised outtakes that didn’t quite gel. And yet the director magically conjures emotional dividends in the film’s invigorating last moments, which wordlessly celebrate an underrated and truly Andersonian virtue: solidarity.

Wes Anderson, in his fourth feature, continues to look at life from his own admirably skewed viewpoint. He has assembled a top-notch team of acting and technical talent to explore human relationships from the perspective of a remarkably flawed and endearingly arrogant man. Though his work is seen as comic, and is wryly funny, there are few belly laughs, and it has a melancholy, bittersweet quality. Bill Murray is, as ever, wonderful as Zissou, finally growing up, growing old, and coming to grips with his own mortality. This 21st century Captain Ahab has to deal with his mid-life crisis and move on. The supporting players are uniformly wonderful; Cate Blanchett – gorgeous, pregnant, pointy-lipped – once again shows off her chameleon qualities as the vulnerable journalist Jane; Owen Wilson plays against type as sweet, innocent Ned; Willem Dafoe is surprisingly funny as the neurotically loyal Klaus.

Michelle Thomas: The Life Aquatic is similar to Best in Show in that it’s shot in a documentary style, and cuts to footage of Zissou’s previous expeditionary films. The crew clearly had loads of fun with the underwater creatures; very few real fish were used but instead of CGI, stop-motion animation created a menagerie that included candy striped Sugar Crabs, electric jellyfish, the sea horse-like Crayon Pony Fish and the 80-foot spotted, fluorescent behemoth known as the Jaguar Shark. The creatures – including Zissou’s own pet orca – feel simultaneously real and fantastic, and fit in perfectly in Anderson’s little slice of the universe.

Trailer
posted by Carillon (9 comments total) 3 users marked this as a favorite
This is one of my favorites. If you are not familiar with the actual films/tv of Cousteau, especially the early ones, Zissou seems like an over the top caricature in some ways. In fact, most early Cousteau works have at least one totally insane sequence that makes Zissou seem tame (dynamiting a reef, flying a two man hippo costume made by a famous French sculptor into a remote African village, trying to eat a giant squid tentacle prepared provençale style, tying two icebergs together in Antarctica while a penguin freaks out, drugging fish and putting them in acrylic bubbles underwater, bringing a parrot to an underwater station in a pressure cooker so it can look out the window at parrotfish, surrounding a grouper’s home reef with mirrors that it interprets as competing groupers and shatters, stealing sea lion cubs in South Africa to see if they can live in harmony with them like man and dog then taking them to the Caribbean and losing one, drugging a shark with cognac, etc).
posted by snofoam at 5:20 PM on May 24, 2020 [8 favorites]

I haven't yet seen Isle of Dogs, so it's not a perfect ranking, but I will say that this one was my least favorites of his films. I certainly enjoyed parts but I felt like the pieces never came together in a way that worked as something greater than the whole.
posted by Carillon at 5:27 PM on May 24, 2020 [1 favorite]

I think it is the Hawaiian pizza of Wes Anderson films: the absolute favorite for a small minority of people.
posted by snofoam at 5:31 PM on May 24, 2020 [6 favorites]

I agree that dollhouse is apt. Most of his movies are family dramas set in highly stylized environments. At the same time, I think using dollhouse as a criticism can carry suggestions of sexism and homophobia. Anderson has a lot of stylistic similarities to Scorcese, but he chooses very different subject matter and I think he is perceived very differently.

I also have some reservations about twee used for Anderson. The films are visually very particular and often very pretty, but they aren’t very sentimental. I think some of the criticisms about him and his style are superficial, which is ironic because often they claim his films are superficial. I find there is often a lot of great stuff in them.
posted by snofoam at 5:15 AM on May 25, 2020 [2 favorites]

I think it is the Hawaiian pizza of Wes Anderson films: the absolute favorite for a small minority of people.

I watched the movie and enjoyed it but the most enduring part of it for me is Seu Jorge's Bowie covers. I'll still listen to that album every month or so.
posted by any portmanteau in a storm at 4:59 PM on May 25, 2020

I think the two moments in this film that made the most lasting impression on me were:
The feeding of the orca (rather the expression while doing it)
And
The moment where seu Jorge was playing guitar while ostensibly on watch and the ladder appears beside him.

This is one of my favorite Wes Anderson movies and pineapple is delicious anywhere, anytime.
posted by Acari at 5:42 PM on May 25, 2020

"Now if you'll excuse me, I'm going to go on an overnight drunk, and in 10 days I'm going to set out to find the shark that ate my friend and destroy it. Anyone who wants to join me is more than welcome."

I'm a boater, and yeah, this is my favorite Wes movie. All us boaters watch it and quote line after line. But then again, I also love Captain Ron.

"Anne-Marie, do all the interns get Glocks?" "No they have to share one."

"Hook this up and make me a latte."

"Son of a bitch, I'm sick of these dolphins."

"Be cool on this shit, okay, cubbie? I mean, at least try to show both sides."

"I've never seen a bond company stooge stick his neck out like that." 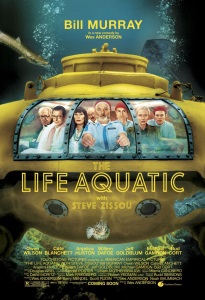