Mockumentary captures the reunion of 1960s folk trio the Folksmen as they prepare for a show at The Town Hall to memorialize a recently deceased concert promoter.


In this hilarious backstage mockumentary, three eclectic, never-quite-famous folk bands come together for the first time in decades following the death of their manager to put on an reunion concert in his honor, at the request of his son. For the members of The Folksmen, The New Main Street Singers, and Mitch & Mickey, time has not been kind. As the show approaches, apprehension sets in, romances are rekindled and ambitions are permanently deferred.

Jeffrey Overstreet: I have great admiration for Guest’s insistence on improvisation. He works with such inspired comics that their on-the-spot interactions are often funnier and more convincing than the best scripted comedy. But even the most talented artists have an off day, and you can feel that for all of the effort put forth in A Mighty Wind, they just never struck the comic gold that dominated the earlier films. The comedy engine is humming, but it stays at a low idle and never fully kicks into gear.

I come away wondering what it is that draws Guest to this theme again and again, from This is Spinal Tap to this, its folky cousin. They explore such a familiar theme — the glory of youthful days, when talent flourished, dreams were big, when hard work led to something memorable, when romance and passion ran hot.

But he is also preoccupied with characters past their prime, doomed to dream of days gone by. I do not sense the films leading us to any insights about how such a sorry fate can be avoided. But I think we can discern hints of wisdom about how we can avoid trudging into regrets and empty nostalgia.

Roger Ebert: There is another difficulty: Guest is rather fond of his characters. He didn't hate his targets in "Best in Show" or "Spinal Tap," but he skewered them mercilessly, while the key characters in "A Mighty Wind," especially Levy and O'Hara, take on a certain weight of complexity and realism that edges away from comedy and toward sincere soap opera.

There were many times when I laughed during "A Mighty Wind" (not least at lines like, "the kind of infectious that it's good to spread around"). But the edge is missing from Guest's usual style. Maybe it's because his targets are, after all, so harmless. The deluded "Spinal Tap" and the ferocious dog owners in "Best in Show" want to succeed and prevail. The singers in "A Mighty Wind" are grateful to be remembered, and as we watch them, we cut them the kind of slack we often do for aging comeback acts. Hey, the Beach Boys may be old, fat and neurotic, but we don't want to spoil the fun by taking their T-Bird away.

Too respectful? Answer is blowing in the 'Wind'

MaryAnn Johanson: If it seems like Guest and Co. have pulled their punches a tad this time around, you might think it’s because Hey, who can honestly pick on folkies too much? These are all sort of very nice people with no genuine delusions about themselves, really, except that other people may enjoy their odd little tunes about old diners and train wrecks and characters named after vegetables. But it only seems like punches have been pulled. The faint ridiculousness of these folkie folks gets amplified here, and their earnestness and their friendliness and their quaintness comes into distinct relief, and what seems to be gentle fun-poking becomes, cumulatively, a pointedly perceptive lancing of how we cling so desperately to small victories and successes (even when they aren’t quite our own) to give our lives meaning while simultaneously celebrating the modesty of our dreams as a good thing, sometimes.

There’s no meanness in A Mighty Wind, mixed in with the obvious love of the objects of its satire, as could be said for Guest’s other films. But that shouldn’t be taken as a sign of softness or indicative of a lack of deliciousness. If we’re not quite laughing with the oddballs on parade here, to laugh at them comes pretty close to laughing at ourselves. Guest turns his mighty comedic bite back on us like he never has before, and as unlikely as it sounds, that’s mighty fine.

Trailer
posted by Carillon (12 comments total) 3 users marked this as a favorite
It's true I don't think to rewatch this one in the way I feel like I can always go back to Spinal Tap or Best in Show and have a blast, but this is the only one that I have listened to the soundtrack more times than I can count.

Despite that, it took me an EMBARRASSINGLY long time to realize that this song is this song.
posted by solotoro at 10:21 AM on July 20, 2020 [1 favorite]

Yes! I have only seen this once or twice, but the soundtrack is golden. They really knew what they were doing.
posted by Countess Elena at 10:26 AM on July 20, 2020 [1 favorite]

"they just never struck the comic gold that dominated the earlier films."

OK, part of my fondness for this movie is the memory of seeing it in theaters with my dad (very much of the exact demographic who would have been in the audience of the reunion concert), who laughed so hard and so consistently through this movie that I thought someone might need to call an ambulance for him.

It it definitely true that the subjects of this film are handled with softer gloves than some other entries in the Guest portfolio, but it doesn't subtract from the comedy for me.

My dad is a huge folkie and he said that in comparison to other Guest movies, it seemed like in A Might Wind he loved his subject too much to really skewer it. (It was really fun to watch this movie with my dad, who could tell you the amalgam of bands that every band was based on, plus all kinds of other context.)
posted by showbiz_liz at 11:07 AM on July 20, 2020 [2 favorites]

Fred Willard (RIP) absolutely killed in this, with so little screen time. This was also the first time I remember thinking Jane Lynch was a comic genius, though I hadn't seen Best in Show at the time.
posted by skewed at 12:21 PM on July 20, 2020

Have told this story before, am telling it again -

The scene: I am watching "A Mighty Wind" with my parents, the day after Christmas one year. Daniel Kantor has the following line:

"In 1971, after the breakup of the Main Street Singers, Chuck Wiseman moved up to San Francisco where she started a retail business with his brothers Howard and Dell, the Three Wisemen's Sex Emporium. It was very successful for a year until they were sued over something having to do with a box of ben wah balls."

My father and I chuckled at that, and made no further comment. Then after several seconds, my mother quietly asked, "Um....what are ben wah balls?"

After a very, very long silence, I finally said, "Okay, I do know what they are, but I think if I tried to explain them to you it would just make both of us really embarrassed."

Mom blinked a couple times and then just said, "ohhhhh, okay." And then we all dropped the subject.
posted by EmpressCallipygos at 12:25 PM on July 20, 2020 [6 favorites]

The musical pastiches here are every bit as precisely constructed as in Spinal Tap, the demented wordplay in the lyrics also.

I base this on no real evidence, but I'm inclined to think the work that Catherine O'Hara and Eugene Levy did in this movie paved the way for "Schitt's Creek". Although the roles were reversed...here it's Levy playing the ridiculous caricature.
posted by Ipsifendus at 2:41 PM on July 20, 2020 [4 favorites]

I also have fond memories of watching this with my father. I could have watched "Spinal Tap" or "Best of Show" with him, but he wouldn't have gotten all of the jokes. This was perfect for someone who remembered "The Weavers" and "Up with People".
posted by acrasis at 4:09 PM on July 20, 2020 [1 favorite]

I love this movie, like, a LOT. I've watched it probably a dozen times since first renting it from Blockbuster back in the day. The soundtrack is gold and the humor is mostly loving and funny rather than biting.

I can't believe this post has been up for a day and no one's mentioned the amazingness that is Jennifer Coolidge and her contribution to the film.

There's a Woody-Allen-ish "let's knock ourselves down" almost anti-Semitism to some of the jokes Bob Balaban's character tells about his childhood at the beginning of the movie. And now, in 2020, Harry Shearer's character's ending falls more than a little flat.

I thought Inside Llewyn Davis was a bit funnier, but also meaner... you could see how much work went into this movie to get so many details right, but for me it didn't quite click.
posted by latkes at 11:06 PM on July 22, 2020

Just finished watching this for the first time with my wife, it is hilarious. Although I enjoy a mean-spirited takedown as much as the next man, I found A Mighty Wind disarmed me completely with how it treats its characters. And of course the songs are great.

My favorite song is the shear inanity of Never Did No Wanderin’. Both versions in the firm are great but I really like the energy of the New Main St Singers version.
posted by AndrewStephens at 6:51 PM on July 24, 2020 [1 favorite] 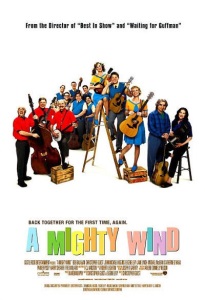