Written by Miguel de Cervantes and published in two parts, first in 1605 and then in 1615, this is the story of Don Quixote, a knight-errant, and his squire, peasant Sancho Panza. Except errantry is out of style by the time Quixote begins his series of expeditions. The jury is still out on if this is fodder for great tragedy or great comedy.


Wikipedia has us covered for a basic article on what many regard as the first modern novel.

The translation linked to here is by eminent Spanish scholar Tom Lathrop, which can be read online without the introduction or copious footnotes (part I, part II). Lathrop's translation is quite readable and his footnotes are extensive and very helpful in explaining everything from the books of Don Quixote's library to the crust of local bread. His chief claim to fame though is his strong conviction that Cervantes' "mistakes" in the text (for instance, Panza's wife is given three or four different names) are intentional and are a form of parody of the chivalrous romances of the time which were themselves littered with mistakes. Therefore, Lathrop leaves them in place while noting them in the footnotes, whereas most all other translators smooth them out in order to ensure consistency in the text.
posted by Fukiyama (4 comments total) 1 user marked this as a favorite
I first got this several years ago at Christmas. We were out shopping and at the bookstore, my dad said to get something for myself, as I am terrible to shop for. Normally I would have gone past it, but the windmill on the cover grabbed my attention. After some false starts, I finally got into it.

I really enjoyed it. While the tragedy is definitely there, I definitely found myself laughing. The side stories of Part I didn't slow me down much. I certainly appreciated them for what their place in the book.

I read this in junior high. At the time, I had a desire to read the 'classics' and make sure I was a well educated person. I don't think it is an unusual attitude for a junior high student. I started reading it not knowing a whole lot about it, but expecting lofty literature and elevated prose.

That was not what I got. I mean, it might have been in there, but it is not what I cared about in the book. Don Quixote has a ton of crude humor in it that really appealed to me as a junior high school boy. I found it absolutely hilarious. Having read some romances later, I can see more of the parody in it now than I did then, but my lack of knowledge did not keep me from enjoying it.

What it did give me was a deep suspicion of how pop culture treats literature. Before I read it, I never thought of Don Quixote as a bunch of bawdy humor and silly jokes. It's talked about as a tragic romance, not a silly farce. It was when I was reading this book that I realized that a lot of people that go on about literature have never even read the books that they are talking about. This is probably not a revelation to the people here, but to me at the time it affected my greatly. It was the first time I realized that I couldn't just trust other people's opinions on what a book meant, I would need to read it myself.
posted by Quonab at 7:04 AM on July 23, 2020 [5 favorites]

Quonab! I first read this in Junior High because I was insufferable and wanted to read the longest book in the library for my book report. I was amazed when it turned out to have diarrhea jokes in it! I also learned a huge number of words, like "doleful countenance". The book was assigned (abridged) in college, and I still enjoyed it. Someone said you should read it three times, and now I'm ready for my old-age one.

Eric Auerbach was not kind to Cervantes in "Mimesis", thinking that this was parody and any profundity was accidental, but I have to disagree. As you read, you feel Cervantes gradually stop being mean and begin to admire the Don, and when (spoiler alert) Quixote dies, it is genuinely sad.
posted by acrasis at 2:01 PM on July 23, 2020 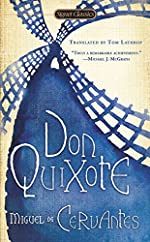