Three World War II veterans return home to small-town America to discover that they and their families have been irreparably changed.

Samuel Goldwyn was inspired to produce a film about veterans after reading an August 7, 1944, article in Time about the difficulties experienced by men returning to civilian life. Goldwyn hired former war correspondent MacKinlay Kantor to write a screenplay. His work was first published as a novella, Glory for Me, which Kantor wrote in blank verse. Robert E. Sherwood then adapted the novella as a screenplay.

The Best Years of Our Lives won seven Academy Awards: Best Picture, Best Director (William Wyler), Best Actor (Fredric March), Best Supporting Actor (Harold Russell), Best Film Editing (Daniel Mandell), Best Adapted Screenplay (Robert E. Sherwood), and Best Original Score (Hugo Friedhofer). In addition to its critical success, the film quickly became a great commercial success upon release. It became the highest-grossing film in both the United States and UK since the release of Gone with the Wind. It remains the sixth most-attended film of all time in the UK, with over 20 million tickets sold.

In 1989, The Best Years of Our Lives was one of the first 25 films selected by the Library of Congress for preservation in the United States National Film Registry for being "culturally, historically, or aesthetically significant".

The movie is noted as an example of the use of deep focus; it was photographed by Gregg Toland, Orson Welles' photographer for Citizen Kane.

Poster's thoughts:
The film's main theme is of course about servicemen coming home. There are other aspects that the film explores more subtly. For instance, a long time ago I read an article, a portion of which discussed the relationship between Homer, the sailor with hooks, and his girlfriend Wilma, specifically the scene where Wilma finally convinces Homer of her continuing love. The article talked about the scene's subtle look at sexual role reversal as Homer has lost his hands. There are other themes as well. The Bomb is of course mentioned.

This movie is rather long, but it moves right along. The characters are all well written and well played. Everyone in this movie is great; Fredric March and Myrna Loy were perfect as the long separated husband and wife. Harold Russell earned both his Oscars. My favorite is Dana Andrews as Fred Derry the bombardier. I always love watching Fred as he works through his trauma from the War and deal with life back home. Interestingly, Dana would go on to play traumatized pilot Ted Stryker in Zero Hour!, the inspiration for Airplane!
posted by Fukiyama (7 comments total)
Hey, here's my review!
posted by EmpressCallipygos at 6:33 PM on November 11, 2020 [1 favorite]

Such a great movie.

There are other aspects that the film explores more subtly.

I think one of the scenes that surprised me the most way back when I first watched it was the one where Fred punches the guy who tells Homer that the Allies were on the wrong side of the war. Like, I'd pretty much only seen pre/during WWII-era movies on TMC, all of which were solidly on-message propaganda-wise, not to mention every movie in the decades since where Nazis were a stock villain, and the whole mythos of the Greatest Generation. So, there's a realism/cynicism to this movie that gives it a timelessness. But it's also deeply and beautifully sentimental; I will never not cry at the Homer/Wilma bedtime scene, or the wedding.
posted by oh yeah! at 4:31 AM on November 12, 2020 [1 favorite]

I think one of the scenes that surprised me the most way back when I first watched it was the one where Fred punches the guy who tells Homer that the Allies were on the wrong side of the war.

This is a theme in at least one other post-war movie that I once asked about on AskMe.
posted by Fukiyama at 8:15 AM on November 12, 2020

Such a good film! I watched this twenty years ago and still think about it sometimes.
posted by johnofjack at 4:07 PM on November 12, 2020

Harold Russell earned both his Oscars

Harold Russell gives a remarkable performance, and is a font of trivia. Only person to win two Oscars for the same role in the same film! One of two non-professional actors to win an Oscar for acting*! Only Oscar winner to sell his status privately! 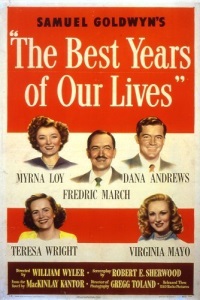