A man afraid to fly must ensure that a plane lands safely after the pilots become sick.


NYTimes: At a time when throwaway gags seem like a luxury in any film, Airplane! has jokes—hilarious jokes—to spare. It's also clever and confident and furiously energetic, and it has the two most sadly neglected selling points any movie could want right now: it's brief (only eighty-eight minutes), and it looks inexpensive (it cost about three million dollars) without looking cheap. Airplane! is more than a pleasant surprise, in the midst of this dim movie season. As a remedy for the bloated self-importance of too many other current efforts, it's just what the doctor ordered.

'Airplane!' seen side by side with the movie it parodies makes it even funnier

Visual gags in 'Airplane!' you might have missed the first time

Have you ever seen a grown man naked?

Looks like I picked the wrong week to quit smoking
posted by MoonOrb (23 comments total) 10 users marked this as a favorite
I had no idea the entire plot of Airplane! was taken straight from Zero Hour! until about two months ago when I saw about half of Zero Hour! playing while I was waiting for another movie to show. Dana Andrews! Sterling Hayden!...and the plot of Airplane! except played straight and not for laughs. It was weird having this revealed to me as a thing after decades of familiarity with Airplane!
posted by MoonOrb at 6:54 PM on March 28, 2016 [2 favorites]

I love this movie. "I am serious, and don't call me certainly." "We have clearance, Carter. Roger, Robert. What's our vector, Vincent?" "Do you like that gay movie about Spartacus?" "It's a big building with patients, it's weird that you wouldn't know that." "I just want to tell you both good luck, the plane will crash and everyone will die if you fuck this up." So many great quotes, I don't know which one to choose. "Looks like I picked the wrong week to talk to my doctor about Crestor." LOL!
posted by one_bean at 6:57 PM on March 28, 2016 [12 favorites]

...and the plot of Airplane! except played straight and not for laughs.

I just want to say good luck, one_bean, we're all counting on you to get those quotes right.
posted by infinitewindow at 8:01 PM on March 28, 2016 [8 favorites]

It's okay, one_bean, I speak Jive. Or in the immortal words of California Tax Crusader Howard Jarvis (in one of the greatest cameo roles OF ALL TIME) "I'll give him another twenty minutes, but that's it!"

I have to restrain myself from telling people who pick up a call, "no, the white phone."
posted by computech_apolloniajames at 8:32 PM on March 28, 2016 [4 favorites]

FWIW, Zero Hour wasn't the first filmed version (and yes, Airplane is a legit version, the bought the rights and everything), nor the last. Flight into Danger was the first, made for CBC television and starring James Doohan, in 1956; Terror in the Sky came out in 1971, starring Roddy McDowall and Leif Erickson.

It was novelized as Runway Zero Eight in 1958 by screenwriter Arthur Hailey, kicking off a drugstore pulp career that would eventually win him the title of best-selling Canadian author of all time, which he retains to this day.

I have seen the Robert Stack mirror gag I don't know how many times, and it still tricks me. It's a brilliant bit of editing and pacing that plays more on memory than on what's actually in the frame. I love it. I love this film.
posted by aureliobuendia at 8:53 PM on March 28, 2016 [3 favorites]

Oh this film.....so many lines. One of my father's favorite jokes was to say he had a drinking problem and pretend to throw a drink in his own face. (Strangely he really DID have a drinking problem so it was kinda....interesting.)

I also didn't realize this was based on a genre of films until I was an adult. It's a rare spoof that can outlive its source material and still be hilarious.
posted by miss-lapin at 9:11 PM on March 28, 2016 [1 favorite]

Also it's kind of crazy seeing OJ Simpson as the pilot now that we know what happens to him and his gambling debts!!
posted by one_bean at 10:24 PM on March 28, 2016 [3 favorites]

It was released over here as Flying High! and having never seen an ZAZ films before, I sat in a state of sheer bewilderment for the first half, missing most of the memorable lines, until I figured out what was going on.

I'm an Aviation Dispatcher and when people ask me what I do for a living, they assume that I'm an Aircraft Traffic Controller so I use the example of Lloyd Bridges' character from this movie when I explain what a Dispatcher does. People usually back away nervously afterwards, assuming that I have multiple substance abuse issues.
posted by KingEdRa at 5:33 AM on March 29, 2016 [8 favorites]

This film helped ruin my cinematic sense of humor as a child, which was successfully fed up through Hot Shots: Part Deux and which, ever since, has slowly been withering away for lack of any true successors. I found it hilarious as a child in the 80s and I get to watch it now and appreciate it on totally new levels all grown up-like.

It's also a sense of great pain, as way too often quoted lines end up producing confused stares or at worse, quick dismissals to return to whatever it was that I was doing before I opened my mouth. More people need to watch this film.
posted by Atreides at 6:52 AM on March 29, 2016 [2 favorites]

I know you. You're Kareem Abdul-Jabbar. You play basketball for the Los Angeles Lakers.
posted by Naberius at 9:17 AM on March 29, 2016 [4 favorites]

At one point my workplace had a screening of Airplane! and one of the Zucker brothers showed up to talk about it. It's insane how little moviemaking experience they had and all the risks they took making this movie and ALL of it paid off in spades. I mean, just the Casting section of the Wikipedia page for this movie shows the kind of out-of-the-box thinking they were doing. It's mindblowing to me that Leslie Nielsen had never done a comedic role before Airplane! and they pegged him as someone who should try it.
posted by town of cats at 10:19 AM on March 29, 2016 [6 favorites]

One of my favorite scenes in this movie is the "lights on the runway" scene. I just love the fact that they loaded up a truck full of lamps for a very short (and not very good) visual pun. I mean - they must've gotten the lamps and the truck from somewhere. And then they drove the truck onto the field, set everything up and ... So much work. That's true dedication to one's craft.

I want to read an oral history of that scene. I want somebody to track down the person who drove the truck and ask them about ... everything. I want to know exactly where they scored the lamps. Who wrote that joke? Get on it!

I used to watch "Airplane!" whenever I was about to get on an airplane. I'm not scared of flying, but I found it made every trip so much easier. However I may have freaked a couple of my fellow passengers out when I started to laugh at very inappropriate moments.
posted by soundofsuburbia at 12:57 AM on March 30, 2016 [1 favorite] 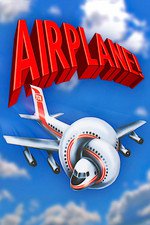